A statement purporting to come from the Islamic State in Gaza listed 18 writers and poets who it says the radical group will kill if they do not cease insulting Islam in their work. 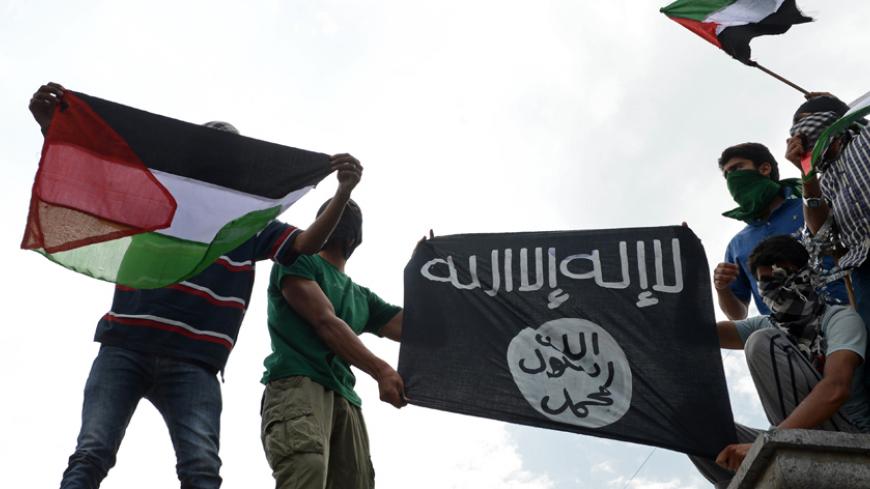 Kashmiri demonstrators hold up flags of Palestine and the Islamic State during a demonstration against Israeli military operations in Gaza in downtown Srinagar, July 18, 2014. - TAUSEEF MUSTAFA/AFP/Getty Images

GAZA CITY, Gaza Strip — Mystery still surrounds the presence of the Islamic State (IS) in Gaza. Statements in the name of the radical group threatening or claiming responsibility for previous bombings in Gaza are not enough to prove the existence of active members in the besieged Gaza Strip, though IS’ extremist ideology is easily spread.

Many Gazans underestimated the importance of the statement issued in the name of IS Nov. 30 in Gaza City demanding that women show "chastity" and abide by Sharia rules of dress. They have excluded the possibility of a real IS presence in the Gaza Strip, which is governed by the same Interior Ministry-affiliated security personnel that ruled under Hamas’ Islamist government.

IS published another statement on the Internet and social networking sites Dec. 3, further raising suspicions about its presence. In the statement, IS threatened to kill 18 Gaza poets and writers within three days unless they "repent" for having excessively insulted Islam in their writings. The statement also warned that IS, or "Wilayat Gaza," as it called itself, will punish apostasy with death.

Despite this new threat, Iyad al-Bozom, a spokesman for the Interior Ministry in Gaza, denied in an interview with Al-Monitor that IS has a presence in the Gaza Strip. “There are no extremist organizations, including the so-called IS,” he said, adding that the posts on social networks in the name of IS represent the opinions of a few individuals and not a full-fledged organization. Bozom stressed that his ministry will seriously address the threats issued.

“We do not prevent anyone from adopting the line of thought of any organization, but we do not allow these thoughts to threaten security or affect our social customs and traditions,” he said.

Satirical writer Akram al-Surani, whose name appeared in the IS statement, dismissed the threat as “silly.” He told Al-Monitor, “It is annoying, since it falls within the scope of restriction of freedoms.”

At a protest in front of the public prosecutor’s office in Gaza, Surani said, “We demand official protection and want to know which parties are behind this. Regardless of whether the threat was made by IS or not, we have concerns about what might happen in the future.”

Although a group of writers managed to meet the public prosecutor, Surani reported, “We only got reassurances that the official authorities have already started their own investigations.” He added, “There are talks about security measures, but we are not seeing anything tangible. No one looked into the message I received on my Facebook account. It could be possible to determine the sender’s IP address. The writers who were threatened did not receive any call from the Interior Ministry.”

These are not the first activities carried out by unknown parties in the name of Sharia and IS in the Gaza Strip. IS had claimed responsibility through social media posts — which have yet to be verified — for the bombing of the French Cultural Center on Oct. 6 and a series of explosions targeting the homes of some Fatah leaders on Nov. 7.

Bozom explained that investigations are ongoing in the previous explosion incidents. Early this year, the Church of the Latin Convent was bombed in what the Interior Ministry considered an individual act unrelated to IS.

Decentralized jihadist organizations such as IS can spread their ideology without being restricted by borders. This is especially true in Gaza, the front line with Israel and under Hamas’ control for eight years, during which the Islamist movement was the one to confront radical religious groups and maintain security in the Gaza Strip.

Mukhaimar Abu Saada, a professor of political science at Gaza's al-Azhar University, told Al-Monitor that he does not rule out the presence of individuals who believe in IS ideology. He said, “Salafist groups with jihadist ideology are present in all the Arab world, but people in Gaza often rule out the presence of IS. Contrary to what they think, this organization is an ideology that does not require the physical spread of persons, and their presence will be not hindered by the Israeli blockade or the tight Egyptian security measures imposed on the Gaza borders.”

Abu Saada asserted that the continuous Palestinian political division has contributed to the presence of such movements, saying, “The ongoing division and the lack of control by the consensus government over the security file enabled these events, which may increasingly recur in the future.”

Abu Saada stated that some writers and intellectuals accuse Hamas of being behind these incidents and of making up IS for two reasons. The first is to draw the attention of people away from internal problems such as poverty, unemployment, delayed reconstruction and other pressing issues. Also, as many people believe Hamas is an ideological extremist group, acts carried out under the name of IS may be intended to show that there are worse groups than Hamas. They may be an attempt to thwart a revolution against Hamas.

When asked, a Hamas leader refused to comment on these accusations, simply arguing that despite the individual nature of the threatening posts, there is nothing to prevent IS from existing in the Gaza Strip.

The official, who preferred to remain anonymous, told Al-Monitor, “The Palestinian arena is infiltrated by all intelligence services of the world, and these threats are not the result of division.” He accused Israeli parties of orchestrating these activities through their wings in Gaza.

The investigations initiated by Gaza's Interior Ministry into previous attacks have yet to yield results. Whether these attacks were organized and executed by an organized network or by individuals is unknown, but signs of a possible IS cell in Gaza are increasing.