Serious efforts are being made toward a reconciliation between Hamas and the Salafists. 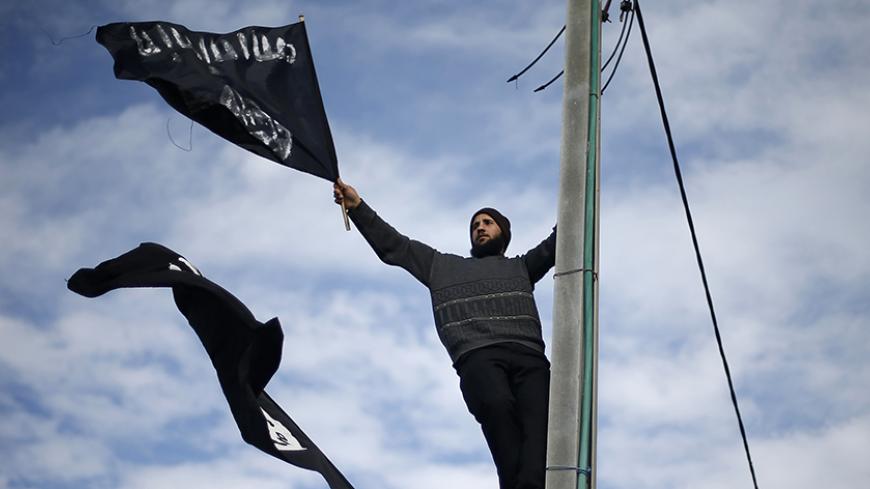 A reconciliation initiative between Hamas and the Salafists was announced July 7 by Sheikh Issam Saleh, a prominent Salafist figure in the Gaza Strip, during a press conference he held in Al-Joundi al-Majhoul Square in Gaza City.

Al-Monitor attended the press conference and took note of the initiative’s provisions: halt and condemn local bombings in Gaza, some of which have not yet been claimed responsibility for; forbid torture in the prisons run by the Gaza security apparatus, except when the detained is accused of collaborating with Israel; refrain from attacking the homes of Salafists; release of Salafist detainees; and return money and weapons to the Salafists.

The initiative also denounced threats against Hamas from any party and demanded cooperation with the movement in jihadist operations against Israel. It also stated that military training for the Salafists in Gaza should be permitted and that provisions are made to facilitate this.

Ismail al-Ashqar, head of the Palestinian Legislative Council’s Interior and Security Committee and a Hamas leader, refused to express his opinion regarding the reconciliation initiative.

He told Al-Monitor, “Hamas is dealing with Salafist groups in Gaza on two levels. On the security and legal level, Salafists are not allowed to destabilize internal security. At the intellectual and dialogue level, work is being done to distance the Salafists from extremism. Although the Islamic State [IS] is not present in Gaza, there are individuals [Salafists in particular] who sympathize with it on a personal level.”

The reconciliation initiative between Hamas and the Salafists was proposed just days after IS threatened Hamas on June 30 to turn the Gaza Strip into a bloodbath, because Hamas is not implementing Sharia in order to please the United States and Iran.

The initiative refused to heed the call by IS members to fight Hamas in Gaza, as Saleh refused an inter-Palestinian confrontation.

Hamas did not state its take on the reconciliation initiative with the Salafists, but it seems it favors a deal over confrontations and prefers settlement over clashes. Hamas is well aware that clashing with the Salafists will only exacerbate an already messy security situation in Gaza, and it does not want to burden itself with more problems in the besieged Gaza Strip.

Senior Hamas officials, who spoke on condition of anonymity, told Al-Monitor that serious talks are taking place to achieve reconciliation with the Salafists. This became clear when some Salafist prisoners were released during the Eid al-Fitr holiday in mid-July.

Hamas’ relationship with the Salafists is becoming more complicated, because most of the Salafists used to be members of Hamas; they defected after disagreements over ideological issues related to Hamas’ participation in the 2006 Palestinian legislative elections and its noncompliance with Sharia.

The Salafists are of the opinion that Hamas entering the elections, as well as the movement's failure to apply Sharia after taking control of Gaza in 2007, constitute ideological breaches, which, according to the Salafists, puts it in the category of infidels.

Sheikh Salem Salama, a member of Hamas’ Legislative Council and head of the Palestinian Scholars Association, said June 20 that Hamas is holding, through scholars and preachers, dialogues with extremist groups supporting IS, in an attempt to try to dissuade the Salafists from extremism. Hamas believes that intellectual and ideological talks away from security confrontation is the best solution.

Hamas’ internal circles have not unanimously approved of a reconciliation with the Salafists. Some supported the initiative and others opposed it, while a third group has not disclosed their stance. We also saw this internal difference in opinions during the reconciliation talks with Fatah and during the war on Gaza in July-August 2014.

The fear to reconcile with the Salafists has emerged in the dialogue within Hamas, as was seen in a discussion July 8 on the Facebook page of Yaseen Izz El-deen, one of Hamas’ prominent activists. It is clear that a reconciliation could give the Salafists a foothold in Gaza, prompt security unrest, attract new members to their organizations and possibly regroup and prepare themselves to confront Hamas.

On July 19, these fears were confirmed when five consecutive bombings targeting large vehicles of Hamas and Islamic Jihad took place in Gaza City. Banners with IS slogans were placed at the bomb sites.

Iyad Bezm, spokesman for the Interior Ministry in Gaza, told Al-Monitor, “The perpetrators of the bombings are criminals, and the security services are investigating the incidents. They are working to track down the perpetrators who will not go unpunished.”

Ahmed Youssef, former political adviser to deputy chairman of Hamas’ political bureau, Ismail Haniyeh, told Al-Monitor, “I support any initiative that preserves communication channels between Hamas and the Salafists in Gaza, through the coordination mechanisms that they resort to in order for them to resolve their differences. Undisciplined members looked for a cover provided by the Salafist groups to destabilize Gaza. Security investigations in Gaza revealed that some of those who recruited a number of members in the Salafist groups are suspicious parties linked to Israel.”

The reconciliation initiative between Hamas and the Salafists coincided with the accusations leveled by Israel and the Palestinian Authority that Gaza has become a favorable environment for IS, especially following the bomb attack by Wilayat Sinai that targeted the Egyptian army July 1 in the Sinai Peninsula and resulted in dozens of dead and wounded. Yet, Saleh denied in his conversation with Al-Monitor “the presence of any relationship between Wilayat Sinai and Salafist groups in Gaza."

This reconciliation further coincided with Hamas banning on July 6 Harakat Al-Sabireen (Movement of Those Who Endure with Patience) — which is close with Iran — after accusing it of disseminating the Shiite ideology among Gazans. Meanwhile, Salafist circles in Gaza welcomed the decision, as evidenced by statements made on July 7 by prominent Salafist preacher Majdi al-Maghribi. Yet, Hisham Salem, head of Harakat Al-Sabireen, said to the press July 10 that he was unaware of the decision to dissolve his movement or downsize its actions. He said that he had only heard of the decision of the ban from activists on social media.

Ashqar, in his conversation with Al-Monitor, refused to deny or confirm the decision regarding the ban on Harakat Al-Sabireen. Yet, he said, “[Hamas] refuses any Shiite thought in Gaza. We are all Sunnis and we follow moderate Islamic thought. Any other thought is rejected. This is the Palestinian social culture in Gaza.”

The Gaza Strip is clearly influenced by the successive developments in the region — particularly the growing polarization between Iran and Saudi Arabia. Yet, it seems that the reconciliation between Hamas and the Salafists has purely internal reasons that are linked to Hamas’ desire to control the security situation in Gaza and to halt the recent bombings, without being forced to please foreign parties.

The downsizing of the activity of Harakat Al-Sabireen by Hamas came following internal pressure within Hamas to not allow any further expansion of the movement in Gaza and a rejection by Hamas’ religious circles of any Shiite presence in Gaza. Meanwhile, tepid ties are preserved with Iran, which prevents Tehran from exerting any pressure on Hamas. Given the lukewarm relationship between Hamas and Iran, Tehran has stopped its support for the movement, and is no longer able to pressure Hamas to spread the Shiite ideology in Gaza. Thus, Hamas is taking contradictory measures and is trying to limit the spread of Shiism among the Palestinians.