What is Harakat al-Sabireen and why is Hamas trying to block their expansion?

Attention shifted to Al-Sabireen Movement in Gaza after an explosion targeted its secretary-general’s house, raising questions about the real goals of this movement that had defected from the Islamic Jihad. 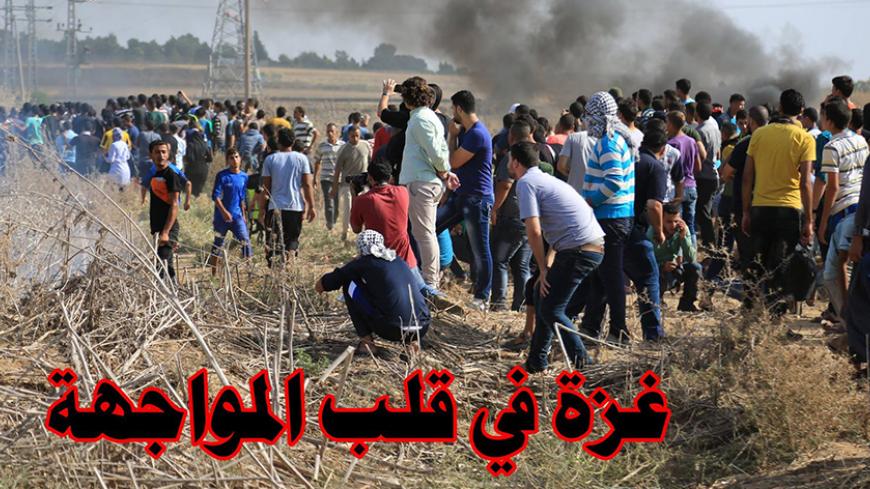 RAFAH, Gaza Strip — Many questions are circulating in Gaza about Al-Sabireen Movement for Supporting Palestine - HESN (Movement of Those Who Endure with Patience), whose activities and slogans have been increasing in the Gaza Strip. The movement is mainly concentrated in northern and central Gaza and in al-Shujaiyya neighborhood. Al-Sabireen’s activities are mainly security-oriented due to constant concerns about Israel targeting the movement’s members composed of youth who have split from the Islamic Jihad movement.

Meanwhile, a number of researchers and Salafi clerics have been accusing the movement of having Shiite affiliations and of being funded by Iran.

Al-Sabireen Movement, which was established on May 25, 2014, came under the spotlight on Feb. 19 when Gazans woke up to the news of a bombing by an explosive device in the vicinity of the house of the secretary-general of Harakat Al-Sabireen, Hisham Salem, who survived the explosion.

Although no one claimed responsibility for the bombing, the movement accused Israel in a statement issued on that same day.

Al-Monitor tried to communicate with Salem, who is also the movement’s official media spokesperson, to no avail. Al-Monitor then met with one of the movement’s activists in the city of Rafah, named Mohammad Harb, 40. He was one of the fighters in the ranks of the Islamic Jihad movement alongside Salem, before the latter defected with two other of his comrades to establish Al-Sabireen Movement in the Gaza Strip.

Harb told Al-Monitor that “Al-Sabireen was first announced as a reformative current in 2010” within the Islamic Jihad, calling for the revival of the ideology of Fathi Shakaki (1981-1995), founder of the Islamic Jihad in Palestine. Shakaki called for an Islamist revolution and expressed his admiration of the Islamic Revolution of Iran in his book titled “Khomeini: The Islamic solution and the alternative.”

Back then, the current demanded “administrative reforms,” in terms of organizational structure and decision-making mechanisms within the Islamic Jihad, according to Harb, but the Islamic Jihad “was not able to contain this new current and became unwilling to have it a part of it. Thus, the reformative current, which is funded by Iran, defected and formed its own movement calling it ‘Al-Sabireen [the patient] for the Victory of Palestine.’”

Observers following up on the movement’s positions can clearly see that these positions are in line with the positions of both the Syrian and Iranian regimes. Such positions, with Iran’s financial aid, led to claims by some Salafi jihadist groups in Sunni majority Gaza that Al-Sabireen Movement is a religious one that seeks to create a Shiite entity in the Gaza Strip that would be an extension of Iran’s influence in the region, along the lines of Hezbollah in Lebanon and Ansar Allah [Houthis] in Yemen. All these groups have Shiite backgrounds, are active in various Arab countries, and are funded and supported by Iran.

Harb, for his part, believes “the claims promoted by these Salafi groups are baseless allegations and an attempt to replicate the sectarian conflicts prevailing in the Arab region” [in Gaza].

Harb does not believe that the movement has any sectarian affiliation, “as Al-Sabireen Movement is supporting these [Iranian-funded] groups in their stance and hostility against Israel.”

Harb refused to reveal the number of the movement’s members as he considered this to be confidential information that Al-Sabireen would rather not disclose to the media.

Although Al-Sabireen was established during Hamas’ control over the Gaza Strip, the relationship between the two parties is ambiguous. On July 6, 2015, press sources reported that a decision was issued by Hamas’ leadership to ban and dissolve the movement after long internal deliberations within Hamas, especially after there had been evidence of Al-Sabireen’s involvement in acts against “the ideology and methodology of the people of Gaza,” according to the press sources.

However, a few hours following the issuance of these reports, Salem denied receiving any notification to dissolve the movement.

In the same vein, Harb pointed that he had been detained by the Hamas-affiliated security forces for criticizing the movement’s management of Gaza and for discussing the problems of Gazans on his Facebook page. “I was interrogated about my relationship with Al-Sabireen Movement,” he said.

Al-Sabireen has been accused by Salafi activists of being a Shiite movement created by Iran in the Gaza Strip to replace the Islamic Jihad and Hamas. However, Harb believes these accusations to be unjust and unfounded, as “the movement is a newly founded Islamic movement seeking to fight against Israel, alongside Hamas and the Islamic Jihad,” he said.

Mustafa Ibrahim, a researcher in Palestinian movements affairs, told Al-Monitor, “Al-Sabireen Movement does not pose any ideological threat to Hamas,” although some support it and join its ranks as being a Palestinian resistance movement.

According to Ibrahim, “Al-Sabireen Movement is a Palestinian resistance movement with a Shiite background. Hamas’ approach to the movement is based on the latter’s commitment to fight Israel in line with Hamas’ visions. Should Al-Sabireen fail to adhere to these visions, Hamas could resort to force to compel it to do so.”

It is difficult to know what the future holds for Al-Sabireen without taking into account the sharp polarization prevailing in the Arab region between the two main axes leading the current phase and headed by Saudi Arabia and Iran. This situation has directly affected the Palestinian organizations, and the disagreements between Al-Sabireen Movement and the Salafi groups opposing it are nothing but a reflection of this polarization in Gaza. The existence of Al-Sabireen Movement is thus directly linked to the achievements Iran and its allies may achieve in the region.