Despite Hamas denials, Islamic State cells exist in the Gaza Strip, and its declaration of a state in the Sinai may accelerate its expansion as Hamas’ grip on Gaza loosens. 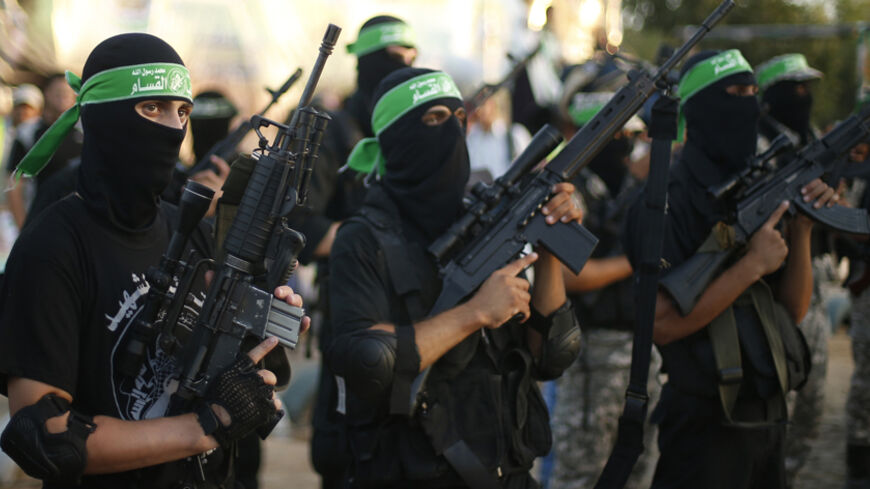 Hamas militants march during a rally in memory of people who were killed during a seven-week Israeli offensive, in Gaza City, Sept. 26, 2014. - REUTERS/Suhaib Salem

Palestinians in the Gaza Strip, like many people around the world, have viewed the Nov. 15 video from the Islamic State (IS), announcing the new name of Ansar Bayt al-Maqdis: Wilayat Sinai, meaning State of Sinai. According to the video, the group is on the outskirts of Gaza, which shares a 13-kilometer (8-mile) border with Egypt, above the ground and in the tunnels, prompting concern that the news could boost IS' presence in the Strip.

Abu Khattab, a leader of Ansar Bayt al-Maqdis in Gaza, pledged allegiance to IS on Nov. 3, in response to a decision by the group’s Shura Council. He threatened IS’ opponents and called for attacks on anyone who works against it.

Ghazi Hamad, a senior Hamas leader and undersecretary of the Foreign Ministry in Gaza, denied the existence of IS cells in the Gaza Strip in a conversation with Al-Monitor, saying, “There are no militants affiliated with the group in the Strip. Any accusations of this sort are lies, as we do not have any extremist members.”

Al-Monitor also met with Abu Mujahid, an IS supporter in Gaza. He said that Hamas has no reason to fear IS as it is not targeted by the radical group, explaining, “Hamas should not have any concerns regarding the announcement of Wilayat Sinai. Despite their differences, IS does not target Hamas, since the group is confronting the Egyptian army. The wilaya would protect Gaza from any possible attacks by Egyptian President Abdel Fattah al-Sisi.”

Despite Hamas’ denial, Abu Mujahid claims that IS is operating in Gaza. “IS is present in Gaza and operates in complete secrecy with very advanced weapons. It works with people affiliated with military groups from Salafist jihadist organizations, some of which returned to Gaza after fighting in Syria,” he said.

On Nov. 12, Egypt revealed that it had arrested six Hamas members as they were fleeing from Sinai to Gaza through the tunnels, carrying parts for weapons, communication devices and a laptop on which emails between the Hamas members and IS were found.

A Hamas official, speaking on condition of anonymity, denied this to Al-Monitor. “I accuse those leaking information about the presence of IS members in Gaza, as they are trying to ruin Hamas’ image. They are seeking to further tighten the grip on the Strip, and consider it a hub holding cells that the whole world is fighting. This is particularly offensive since Hamas is in no way linked to IS. Its relations are limited to the factions fighting Israel, and it does not get involved in military battles against Arab regimes,” the official said.

Head of Hamas’ political bureau Khaled Meshaal was asked about Hamas’ relation with IS in an Aug. 24 TV interview. He answered, “Hamas does not fight outside the borders of its land and we do not have any relations with IS. Hamas is not a religious group that adopts violence; it condemns IS’ acts, such as killing civilians and journalists.”

Al-Monitor obtained a copy of the new statement published this month by the Hamas-affiliated Center for Future Research in Gaza, which highlighted the threat IS posed to other Islamists. The statement read, “The IS expansion poses a threat to the development of the Islamic phenomenon, it delays the Islamic project and increases the obstacles faced by Islamists. The group’s control may be declining in some areas, but it is expanding in others. The group is in a constant process of growing.”

On Nov. 4, Abu Musab al-Maqdisi, an IS figure in Sinai, issued a statement calling on IS members to target trucks of weapons and missiles coming from Sinai to Gaza and destined for Palestinian factions. He also accused Hamas of stealing weapons going to jihadists in Gaza, explaining that these factions are not entrusted with the life of Gazans and that their betrayal for Muslims can be clearly seen.

The Hamas leadership did not reply to the statement, but social media pages of Hamas-affiliated figures discussed how close IS is to Gaza after the announcement by Wilayat Sinai. An active Hamas figure posted on Facebook, “If IS becomes powerful in Sinai, then it will come and fight the ones who do not follow religion in Gaza.” This post stirred a fierce discussion between supporters and opponents of IS.

Al-Monitor noted that due to the battles the group is fighting in Iraq and Syria, as well as its war against the international coalition, IS has gained some support among certain members of Hamas, which has become obvious through discussions on Facebook.

A former official in the Palestinian Preventive Security in Gaza told Al-Monitor on condition of anonymity, “Even though Hamas has denied the existence of IS in Gaza, the group is indeed present. Its members are increasing and it is expanding fast, as Hamas’ grip has been loosening in the Strip, after it left the government. This would result in an expansion of IS, which takes advantage of the regions that lack authority.”

“Closing the tunnels between Egypt and Gaza would prevent IS members from leaving. They would operate in Gaza, since the tight security that was once imposed by Hamas has faded today,” he added.

Meanwhile, Khalil al-Hayya, a member of Hamas’ political bureau, announced Nov. 13 that Gaza will not return to security chaos, and that Hamas will never harm Gaza’s security.

Al-Monitor learned from a Palestinian security official at the border between Gaza and Egypt who preferred to remain anonymous that “security forces are intensively mobilizing in order to control any movement from Gaza to Sinai and vice versa, and prevent anyone from fleeing from Egyptian Rafah and Sheikh Zuweid — which are witnessing security incidents — to the Gaza Strip.”

In a nutshell, Hamas does not seem happy about the events in Sinai, especially after the IS announcement of Wilayat Sinai. The fact that Hamas has not yet commented on this development means that it does not yet have a final position, while it is carefully observing the wars that IS is waging in neighboring countries. Hamas believes that Gaza has enough problems of its own and does not want to make the situation any worse by turning the Strip into a new focus point for IS operations.