Tension renews between Hamas, IS in Gaza 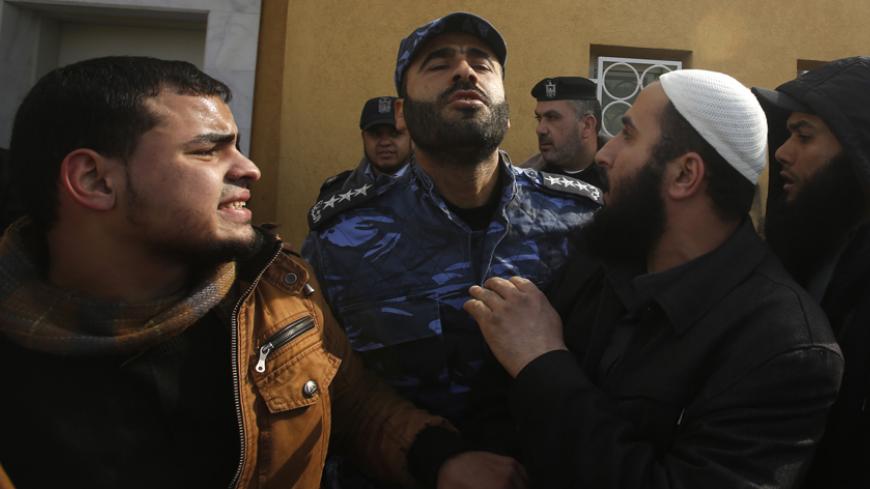 A Palestinian police officer loyal to Hamas pushes back Salafists during a protest in Gaza City, Jan. 19, 2015. - REUTERS/Suhaib Salem

The security situation in the Gaza Strip is witnessing a state of tense calm, after the bombings that occurred in the last few weeks, most recently April 6, when an explosive device targeted the Internal Security apparatus in the Sheikh Radwan neighborhood, resulting in damage without injuries. No one claimed responsibility for the explosion, but accusations have been exchanged between Hamas and Fatah in regard to who is responsible.

All of a sudden, the beginning of a new conflict between Hamas and Islamic State (IS) supporters emerged, sparking fears of security tension — which Gaza can do without, in light of its issues that worsen by the day.

Tension between Hamas and IS supporters began Feb. 22 through dialogue between former Interior Ministry spokesman Islam Shahwan and IS supporters, during which they exchanged accusations, following the execution of Egyptians in Libya on Feb. 15.

In early April, the security forces in Gaza arrested a number of IS supporters tied to the bloody clashes at the Yarmouk refugee camp in Syria between IS militants and the Aknaf Bait al-Maqdis Brigades that resulted in decapitations and killings of Hamas cadres.

Al-Monitor learned that Sheikh Adnan Mayyat, a prominent theorist in jihadist Salafism, who praises IS actions and attacks Hamas, was among the detainees, including seven of his supporters. Other supporters were summoned, too.

This renewed wave of tension between Hamas and the Salafists has made their ideological differences re-emerge, after the two parties had reached an agreement in mid-2013 to put an end to their differences, and solve any problem between them through dialogue and understanding, not by exchanging accusations.

In addition, Hamas does not need the besieged Gaza Strip to turn into a place to export IS ideology, for fear of being accused by Egypt and Israel of harboring members of the group; Hamas sees that the international coalition is targeting IS wherever it is.

A statement was released in Gaza on April 6 by the families of the Salafist detainees, in which it was noted that Hamas is still launching arrest campaigns against their children, which could result in an escalation of events that no one wants.

However, Iyad al-Bozom, spokesman for the Interior Ministry in Gaza, told Al-Monitor: “The security forces had launched an arrest campaign against any party, because what happened was the arrest of one person — Adnan Mayyat — who refused to appear before the security forces after being summoned twice, for clarification on certain issues. He was released on April 9.”

He added: “IS is not present in Gaza. The intimidation intended by some of the media outlets is not at all true.”

Youssef Rizqa, a former minister of information in the Hamas government and Ismail Haniyeh’s political adviser, told Al-Monitor, “News about the arrests of IS supporters is exaggerated since there are no extremist groups in Gaza.”

The repeated denial expressed by Hamas of the presence of IS members in the Gaza Strip seems aimed at rebutting the Israeli and Egyptian allegations of an IS presence in Gaza after its members fled from the Sinai Peninsula. But a certain conviction exists that IS supporters are in the Gaza Strip, although they may not use the group’s formal name.Their ideologies, speeches and demonstrations show that they belong to the group, one way or another.

One of the indicators pointing to the presence of an “IS infrastructure” in Gaza is the explosive devices that were placed behind the French Cultural Center in Gaza in last December and the threats some academics and journalists received from IS in the same month.

The last effective operation carried out by IS supporters in Gaza occurred Jan. 19 when they marched toward the French Cultural Center to protest against the Charlie Hebdo cartoons insulting the Prophet Muhammad.

A security official in Gaza told Al-Monitor on condition of anonymity: “The security forces followed closely the Salafists’ support of the IS military offensive in the Yarmouk refugee camp. They issued statements in support of what is going on there, including the massacres against the Palestinians, while some preached in mosques, praising IS’ role and actions.”

The Yarmouk refugee camp in Syria had been attacked in early April by IS militants, who killed dozens of Palestinians, and assassinated Hamas official Yahya al-Hourani there, sparking violent clashes between the Hamas-affiliated Ansar Bayt al-Maqdis and IS militants.

The armed clashes between Hamas and IS continued in the south of Damascus, but verbal clashes and the exchange of accusations originated in the Gaza Strip, especially on social media platforms, where Hamas cadres launched a media campaign against IS.

Former director of public relations at the Ministry of Interior, Ibrahim Salah, accused IS on April 7 of distorting Islam with its actions.

Bozom wrote some harsh words on his Facebook page on April 6: “IS is just a passing phenomenon, and an artificial tool that goes against human culture and religion. It will not survive.”

The battles fought by IS members against the United States and Syrian and Iraqi forces have received broad acclaim by some Hamas members because it showed the power of IS militants and their ability to achieve heavy blows against the armies fighting them in more than one country.

However, an agreement was reached among Hamas circles that opposes IS on the basis of the Yarmouk battles, after it became clear that the confrontation is now between the remaining Hamas presence in Syria and IS militants. This means that the group does not exempt any of its opponents, even Hamas; it fought the members of the movement and even beheaded some of them.

The tension between Hamas and IS took another turn when preachers focused during their Friday sermon April 10 on what they saw as “atrocities” committed by members of the group, and rebutted their claims that accused Hamas of not abiding by Sharia. In addition, they said that IS members are not fully aware of the concepts of Islam and Sharia principles.

In an interview with Al-Monitor, Hassan al-Saifi, the undersecretary of the Ministry of Awqaf in Gaza, announced the “launching of a campaign to fight extremist ideology in Friday sermons and religious teachings, where preachers seek to educate people through correct moderate thinking, by staying away from supporting the takfiri ideology and those who adopt it.”

Although Hamas has released the IS supporters it had detained, the atmosphere in the Gaza Strip is rather tense and cautious, in light of the polarization and accusations. In addition, IS supporters' self-confidence continues to increase every time the group successfully strikes in Syria, Egypt and Iraq.

However, Hamas may find itself forced this time to stop resolving the differences with the Salafist groups in dialogue and debate as it usually does, if it feels that the bombings threaten Gaza’s security. Hamas might resort to a security solution with IS supporters, despite its unwillingness to make way for an internal confrontation, in view of information about the presence of dozens of militants with whom a confrontation is bound to result in losses.