Hamas-affiliated security forces have been waging a large-scale arrest campaign targeting Salafists, while Gaza’s fate seems to hang in the balance. 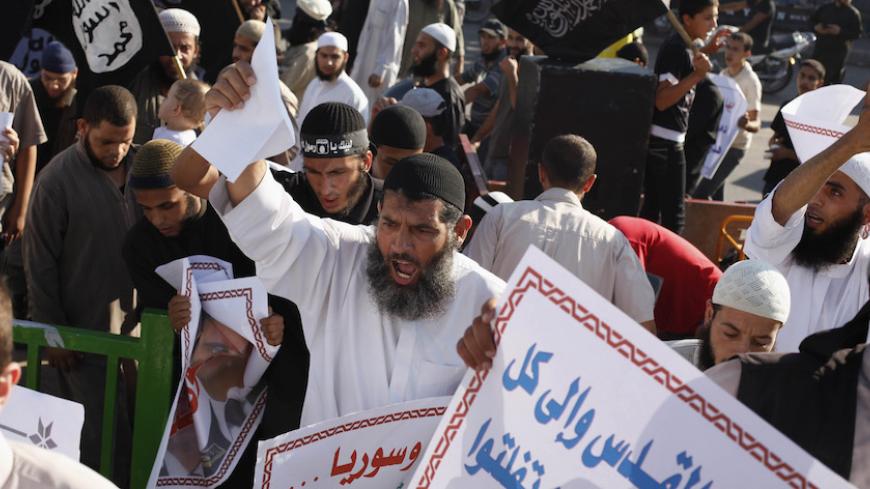 GAZA CITY, Gaza Strip — The tension between Hamas and Gaza security services against Salafist jihadists has returned to the fore, most recently in a campaign of arrests targeting Salafists. Hundreds of security checkpoints have been set up to search and arrest Salafists and anyone thought to be connected to them in Gaza City.

The checkpoints and the intensive security campaigns portend that tensions between the two sides may reach a peak not seen since 2009, when security services and Hamas took control of the Ibn Taymiyyah mosque, leading to the death of Salafists who had barricaded themselves inside. A significant number of Salafists are now languishing in Gaza jails.

Gaza's Deputy Interior Minister Kamel Madi told Al-Monitor that the detainees are fewer than 10 and called them "lawbreakers."

“The detainees are individuals who broke the law. We did not detain them [for being accused of being members] of the Islamic State [IS]. We detain anyone who breaks the law. We have no problem with any Palestinian citizen,” he said.

Madi denied that IS or even its affiliate, Ansar al-Dawla al-Islamiya (Arabic for “supporters of the Islamic State”), are present in Gaza. He said that Hamas is confronting persons connected with Western and local intelligence services. He said, “[IS] is not present in Gaza. Those suspected of being [affiliated with IS] use foreign names. And I think that even if they apply to join IS, it will not accept them because they have moral and behavioral problems. Some have security links with local and regional intelligence, or with the Israeli occupation. They issue desperate statements and threats, such as the statement that came out on May 3 and which contained threats.”

Al-Monitor spoke with a Salafist activist in the Gaza Strip, Abu Ahmad al-Ghazzi, who repeated old claims that IS is not present in Gaza, noting the presence of IS supporters. He denied having any weapons or having carried out recent bombings in Gaza, such as the bombing near the parliament building in western Gaza.

Commenting on the recent statements attributed to IS supporters — namely the May 3 statement in which security forces and Hamas threatened to arrest Salafists and gave them 72 hours to release detainees — he said, “I did not threaten anyone. Anyone can write a statement under any name and publish it on Twitter, which was the case for the latest statements. But what’s issued from the Salafists has a specific and formal platform.”

“On May 14, 2015, the police arrested a person in a civilian car in the Shajaia market in Gaza City," said Ghazzi. "He was in possession of a bomb, which he wanted to plant in the market and detonate the next day. [The plan was to attribute the explosion to Salafist threats.] But he confessed the incident and other similar incidents, including the bombing of the gate of the relief agency in Gaza on April 18, 2015. And this man has nothing to do with the Salafists, as we were able to identify him.”

Ghazzi said there are 60 IS detainees in the Gaza Strip, including students, the elderly and workers. “Some are being detained in Hamas sites, and some at the headquarters of the Internal Security Agency," he said. "We were surprised by how much torture they endured. Four have been hospitalized as a result of torture. They released Salafist Sheikh Adnan Mayt a few days ago. He had [signs of torture] on his body.”

He said that the Ministry of Interior in Gaza is trying to distort the Salafists’ image by accusing them of links to international and local intelligence and of having pending moral infractions with the security services in Gaza, doubting the government’s ability to provide evidence for its accusations.

Ghazzi said that “Hamas’ war” is not against a specific case, but against pro-IS Salafists. “In Gaza, there are many political, intellectual and religious stripes. So why focus on the Salafists in particular? What’s the reason for [Hamas’] extreme and illogical hostility?”

In light of these high tensions between the Salafist movement and Gaza’s security services, the question remains: Will the confrontation between the two sides expand and take on different, larger dimensions?

An expert in Islamic movements, Khalid Safi, told Al-Monitor, “Based on previous information, there are three scenarios for the relationship between Hamas and the Salafists: containment, absorbing the tension and reaching a de-escalation. I think that Gaza has seen a sort of calm. Hamas has de-escalated with these movements, which were allowed to demonstrate, as happened in front of the French Institute in Gaza a few months ago.”

“But there is yet another scenario: confrontation," Safi said. "That’s what happened in the bloody confrontation at the Ibn Taymiyyah mosque in the town of Rafah, where many were killed. The current phase is witnessing a sort of escalation between Hamas and the jihadist movements. There is a campaign of arrests and security prosecutions at the checkpoints. Hamas is on full alert. Therefore, we can say that there is now a kind of tension, which may follow several scenarios. There may be more violence and the Salafists may resort to bombings, not only by planting explosive devices, but also by assassinating Hamas figures.”

Safi said that the real power of these groups lies in their use of violence. But it seems that these groups have no hierarchically integrated structure with political and military leadership. “We don’t know their numbers because they usually work in secret and may have sleeper cells," he said. "But we cannot say that their numbers are large. The evidence continues to indicate that they may be in the dozens. So, the military power in Gaza is in Hamas’ favor. [Hamas] has a large and strong military apparatus. These groups do not constitute an existential threat to [Hamas], but can keep Hamas’ security services busy.”

However, Safi believes that the source of strength of the Salafist jihadists in Gaza is outside the borders. “The center of power that these groups rely on to make threats is outside the borders, in the sense that they have connections in the Sinai [Peninsula], which is adjacent to Gaza. With their strong presence, they may constitute a real threat to Hamas’ money and weapons sources. [The groups] also have international reach in Syria and Iraq. So they pose a threat to Hamas’ members, leaders and interests abroad.”

It seems like the tense relations between Hamas and IS-affiliated Salafists are continuing to snowball, and it looks like it might not blow over any time soon.