Gaza’s Salafists do not expect any change from a unity Palestinian government, noting that Hamas will remain in control of security in the Gaza Strip and will keep up the pressure on their movements. 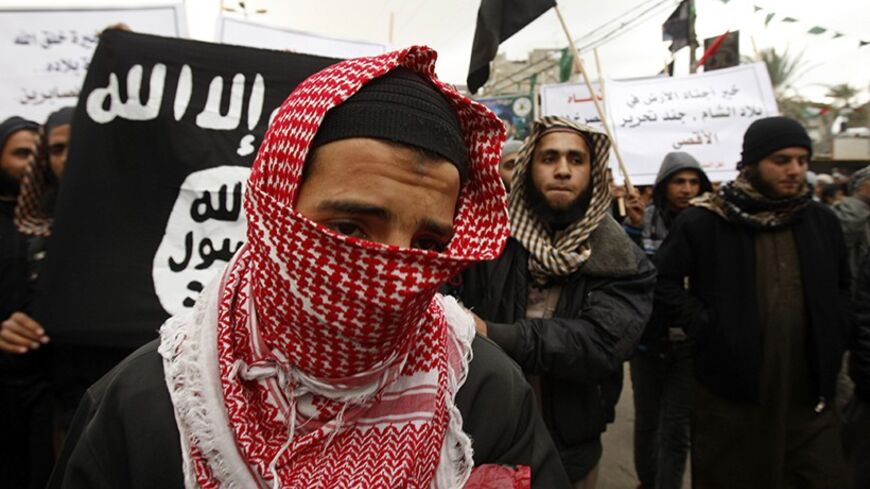 A Palestinian Salafist takes part in a protest in Rafah in the southern Gaza Strip, Feb. 24, 2012. - REUTERS/ Ibraheem Abu Mustafa

GAZA CITY, Gaza Strip — The date of Aug. 15, 2009, marked a dramatic development in the relationship between Hamas and Salafist groups in the Gaza Strip. The relationship between the two was ruined that day when security forces loyal to Hamas attacked the Ibn Taymiyyah Mosque in Rafah in the southern Gaza Strip, which was controlled at the time by the Salafist-jihadist Jund Ansar Allah Party, led by Sheikh Abdel-Latif Moussa. The attack killed him and dozens of his supporters holed up in the mosque.

The relationship has been marked by constant tension ever since.

Yet, with the signing of a reconciliation agreement between Fatah and Hamas, and the start of consultations to form a national unity government headed by President Mahmoud Abbas of Fatah, questions started being raised about the next government’s policy regarding Salafist movements.

“They [Hamas] tried to attack the mosque when the government was under Fatah’s leadership in 2004. They took [the mosque] in 2008 for a week, but then they left and returned it to us after an understanding was reached. But the understanding was mixed with the taste of assault, battery and lynching,” he said.

Wadi said the problem in the relationship between Hamas and the Salafists is that Hamas was trying to turn differences of opinion between the two parties into compulsion and subordination. He accused the Hamas government in Gaza of causing division between citizens and parties by not standing at an equal distance from everyone.

“They want to impose the ideology of the Muslim Brotherhood on us and force us to follow it and not deviate from its framework. They distort our image and describe us as having deviated from [Islamic] preaching, and say that we don’t understand the truth and that we are being manipulated by secular movements and other political parties,” he said.

He stressed that all the charges against them are “false and aimed at distorting [their] image. … This is all false. They distort our image by slander and lies against our ideology and our followers, and accuse us of mocking the martyrs and challenging the [religious] scholars, those dead or alive.”

Wadi said that Hamas’ policy was to control the mosques by force or politics, or to contain them. “Hamas seized a number of mosques through politics and others through force. And it controlled others by containment,” he said. “The problem of Hamas and the Muslim Brotherhood in general is that it sees itself as the 'mother' and the foundation [of Islamist movements], and thus has a privilege and an advantage [over others], and deals with arrogance and vanity with others.”

On the possibility that the policy toward the Salafists in the Gaza Strip would change with the birth of a new government headed by Abbas, Wadi said that the presence of the Palestinian presidency would be just for show. He noted that Hamas controls Gaza in general, pointing out that Hamas deals with others more as an organization than a government.

Al-Monitor spoke with Abu Abdullah al-Salafi, a member of an armed Salafist group in Gaza. “Having a Hamas government or a national unity [government] will not change anything about how they will treat the Salafist movements in the Gaza Strip,” he said.

“Who will be in the government and who will lead it will determine [how the government will deal] with the Salafists. The restrictions will either stay in place or will disappear with the presence of a government that will adopt new policies.” he added

Abu Abdullah raised the possibility that external and internal agendas will be implemented to crack down on Salafist groups in Gaza. “It is possible that jihadist movements would come to Gaza because of Egyptian presidential candidate [Abdel Fattah] al-Sisi, who wants to erase Ansar Bayt al-Maqdis, which has some links with Gaza Salafists. In addition, there are private agendas being carried out by some parties that want to fabricate security problems, such as bombing shops and the like, and then the accusations would be pinned on Salafist youths. Those agendas are intended to get rid of the Salafist movements in Gaza.”

Hamas spokesman Sami Abu Zuhri told Al-Monitor that his movement is not hostile to Salafist ideology, stressing that every citizen has the right to express their beliefs and that Hamas has a policy that governs its relationship with the factions and other parties, including Salafists. “We don’t accept that this thought be used to interfere with the particularities of others and threaten their lives. This is a red line that we will not accept to be crossed. The Salafists move around in Gaza with complete freedom without [anyone interfering] with them except in one case: when some of them target others and their lives.”

Political analyst Akram Atallah believes the situation in the Gaza Strip will not change for the Salafist movements under a national unity government. He told Al-Monitor that the security situation would remain under the control of Hamas even if Hamas did not head the government.

Atallah indicated that during the past few years the Hamas movement suppressed the so-called “violent, armed Salafist” movement, which Hamas considered a threat to its rule. On the other hand, Hamas has turned a blind eye to the proselytizing Salafists, Atallah said.