Hamas cracks down on Salafists in Gaza Strip

A recent series of arrests shows that despite mediation efforts trying to quell the conflict, animosity between Hamas and Salafists seems to be growing. 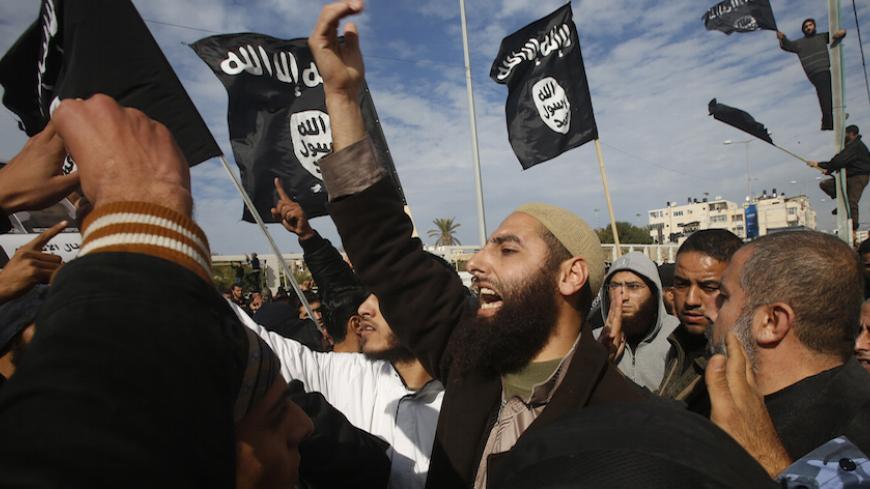 GAZA CITY, Gaza Strip — The confrontation between the Salafist jihadist movement and Hamas-led security services in the Gaza Strip has returned to the surface following a two-year truce between the two sides.

Strong tensions returned after security services arrested Salafist Sheikh Adnan Mayt, a prominent Salafist jihadist activist, April 6. This was followed by the arrest of other Salafists and raids of their homes, an April 29 statement by Ansar al-Dawla al-Islamiya (Arabic for “supporters of the Islamic State”) said.

The arrests increased following the two roadside bomb blasts that detonated in the Gaza Strip on April 18, which the Interior Ministry described as "primitive." One of the blasts exploded near the outer wall of the UNRWA headquarters, and the other went off near the UNRWA general prosecutor's office. A third explosion took place a day earlier near the Abu Mazen roundabout in western Gaza.

In an interview with Al-Monitor, Abu al-Ayna al-Ansari, a Salafist movement official, said that his movement did not conduct these bombings, and condemned the arrests of 30 Salafists that began in mid-April across the Gaza Strip, especially in the central Gaza Strip and the south.

“These explosions usually precede the arrival of the consensus government’s delegation to Gaza, for reasons that act in the interest of parties Hamas knows very well,” he said. “Since the truce agreement between Hamas and us [Salafists], there has not been any violation on our part. Following the blasts, Hamas demanded that some of our fellow [Salafists] turn themselves in. Yet they refused, which caused the issue to escalate into prosecutions and the raid of more than five houses.”

On May 3, Ansar al-Dawla al-Islamiya posted on Twitter: “We are giving Hamas and its affiliated security services 72 hours starting from the publication date of this statement to release all the Salafist detainees; otherwise all [possible] options will be [made] available to respond.”

There are a number of Salafist jihadist groups in the Gaza Strip, including Jaysh al-Islam, Jaysh al-Ummah and the Mujahedeen Shura Council. Hamas has succeeded in controlling these groups through its security solution, detention, repression and murder.

The most notable clash between Hamas and the Salafists was when the Hamas government security services entered the Ibn Taymiyyah Mosque, killing Sheikh Abdel Latif Moussa and 15 of his followers, after he had proclaimed a so-called Islamic emirate in the Palestinian territories in August 2009.

The tensions, however, have returned and reached their peak after an attack by Hamas-led security services on the Al-Moutahabbin Mosque in the east of Deir el-Balah in the central Gaza Strip. The mosque was later demolished by Hamas on May 3.

Ansar al-Dawla al-Islamiya wrote on its official website, “The Hamas regime gangs have demolished the mosque in Deir el-Balah in the central Gaza Strip.”

Ansari told Al-Monitor, “The mosque, which is in an agricultural area, served as a prayer room. It was attacked by Hamas after prayer Friday, as the people were leaving it. [Hamas] shot into the air, beat the worshipers and arrested seven Salafists, including Sheikh Yasser Abu Houli, the imam of the mosque. Then on [May 3], the mosque was swept away.”

It seems like the response to the mosque attack came soon after. On May 4, unidentified people detonated an explosive device near a police station in the vicinity of a general security office in northern Gaza City, as well as another explosive device near the Darul Arqam School in eastern Gaza.

About these blasts, Ansari said, “We do not deny that the security services’ escalation has caused the explosions, as a reaction by our fellow Salafists. However, there is an agreement to contain [the situation] at present. We are not perfectly sure that everyone will abide by the agreement, since it is a large movement. We are trying not to be dragged into the bloodshed. The war is still alive in people’s memory, and we do not want any fighting to take place in the internal arena, as long as they [Hamas] keep their hands off the Salafist youth.”

For its part, the Hamas-led Interior Ministry published a statement May 6 in which Gaza police Chief Tayseer al-Batsh said, “It is true that there is a lack of capabilities and resources; some incidents occurred and the consensus government has abandoned its responsibilities, but that does not mean there is a state of insecurity. Rather, there is a state of security in Gaza.”

Deputy Interior Minister Kamel Abu Madi told Al-Monitor that the ministry has dealt with the situation in the best way possible, and no one is allowed to violate the law. He stressed that the security services in the Gaza Strip are using all the capabilities they have to uphold the law and the citizens’ security.

“No one can be arrested with no reason," Abu Madi said. "The arrests came based on specific behaviors and wrongful acts.”

He noted that the ministry has good relationships with the Salafists and any religious persons or Palestinian citizens, as long as they are not linked to any foreign or Arab security parties.

Al-Monitor learned from a security source, who spoke on condition of anonymity, that internal and external mediations are taking place and that representatives of Palestinian factions are mediating between Hamas and the Salafist groups to contain the crisis.

Ansari said that the ministry has already met with the factions' representatives, who delivered a message from Hamas confirming the latter’s insistence on the Salafists’ involvement in the bombings. “We have responded, making our position and innocence clear, and clarified that we have nothing to do with the bloodshed and that we are committed to [exercising] self-restraint,” he said.

Ansari told Al-Monitor that Salafist groups in the Gaza Strip are united amid this crisis, and agreed that they are against the bloodshed. He added, “Yet, in case the Hamas-led security services choose to escalate, we would like the people to know that we were in fact willing to stop the bloodshed.”

Ansari believed that Hamas’ strategy regarding the Salafists has changed after Quartet representative Tony Blair’s visit to the Gaza Strip on Feb. 15, and subsequent to the Hamas-Saudi Arabia rapprochement. “Hamas has changed [the way it deals with] us, after it moved closer to the US-led coalition against terrorism, and following the discussion about a long-term truce between Hamas and Israel,” he said.

The 72-hour deadline that Ansar al-Dawla al-Islamiya gave to Gaza’s security services is over. Nevertheless, nothing has happened yet.

A Salafist source told Al-Monitor that abductions of Salafists are continuing, including the kidnapping of Salafist Sheik Mouchir Arafa in the southern city of Khan Yunis. The source also said that Salafists arrested by Hamas security forces are being subjected to beatings, torture and humiliation.