Though Ansar Bayt al-Maqdis has been weakened by Egyptian security forces, the group continues to threaten the stability of the Sinai Peninsula. 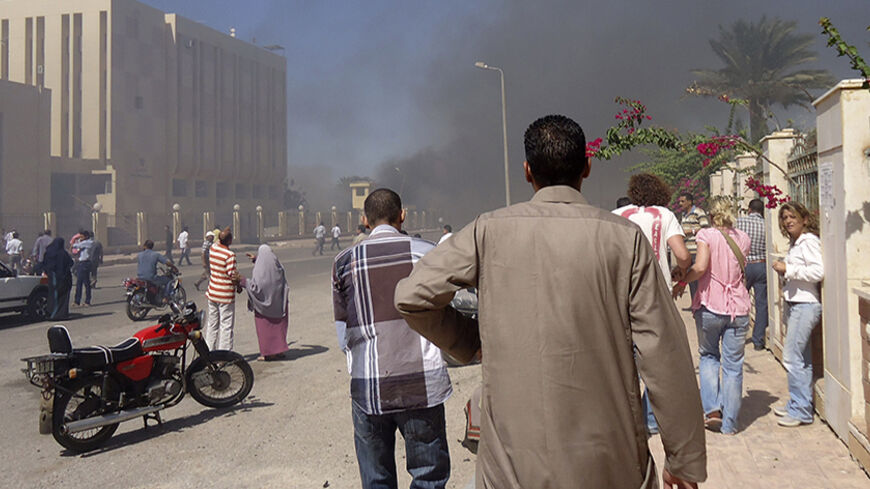 Residents and tourists watch as smoke rises near a state security building after a blast in South Sinai, Oct. 7, 2013. - REUTERS

A correspondent in Sinai
September 4, 2014

RAFAH, Egypt — There’s been a lot of talk in the local and international media about the Sinai Peninsula — both on TV and in newspapers — after the terror group Ansar Bayt al-Maqdis broadcast a video showing the beheading of four citizens. They had been accused of providing Israel with information about the movements of group members in the region.

"They are the enemy, so beware of them," read the title of the video. In it, the group revealed details about the involvement of local elements — group members' local Bedouin relatives — in helping the Israeli Mossad to monitor and eliminate individuals using Israeli drones.

Three weeks before the release of this video, on Aug. 5, reports emerged that Israeli drones had intervened multiple times in Sinai to eliminate dangerous members of Ansar Bayt al-Maqdis before they carried out attacks on the Israeli border.

The information reported by Al-Monitor from the ground and the investigation in the tense border area precisely matched the confessions made by those killed before the terrorist group beheaded them.

On June 23, evidence confirmed a link between Ansar Bayt al-Maqdis and the Islamic State (IS). The details were explicitly verified in the Eid prayer held by heavily armed members of the group in the Sinai desert on June 30. The preacher, Abu Osama al-Masri, concluded the sermon with a prayer for IS, calling for "Allah to [allow them] to conquer Baghdad, the rest of the country and the people's hearts."

Al-Monitor met one of the four people beheaded by the terrorists in April 2013, shortly after his release from prison. He then sought another meeting in February this year, the last time Al-Monitor spoke to him, when he relayed his story. He spoke about his suffering and his inability to provide for his family because he was unemployed and couldn’t find any job in the deserted region he lived in, only a few hundred meters away from the Israeli border, south of Rafah.

The young man in his 20s said, “I only had one job opportunity that a guy in the region had offered me, and it consists of bringing cigarettes and drugs into Israel. I agreed to take the job because I was in desperate need of money, and my neighbor convinced me that my work would only require me to cross meters from the border and come back quickly.”

“At my third attempt during this dangerous job, in 2009, an Israeli patrol discovered us. We tried to escape but my 16-year-old neighbor was shot, and I was arrested and surrendered for trial. I was sentenced to three years in Israeli jail,” he added.

He told Al-Monitor about the seriousness of his predicament, saying, “I was harassed by investigation officers in the Israeli Mossad to force me to work with them and gather information from Sinai about jihadist groups, and especially some names in my region. I only provided minor information to avoid facing additional punishment, similarly to many of my neighbors that the Mossad officer told me about.

"Since I got out of prison in 2013, I was never left alone. I have been under a great deal of pressure and continuous threats, but I never gave in. I am trying to find a job opportunity so I can provide for my family. I wish you could convey my messages to officials who can find me a job," he said.

These four people were not the only ones beheaded: Three other decapitated bodies have been found by residents of border towns.

In a statement issued and distributed by Ansar Bayt al-Maqdis, of which Al-Monitor obtained a copy, the group vowed to behead those operating against it in favor of the Mossad, in an implied threat to the Egyptian government, unless they repented before the arrival of what they called the security wing of the group. The names of nine people beheaded by the group to serve as a lesson for others were listed at the end of the statement.

We were left to wonder: Why did the group choose this specific time to present this appalling and shocking video? What is the group's message? What is the extent of the danger posed to this strategically important region? And how will the state deal with this development, especially after a long year of struggle by the Egyptian army against terrorism in Sinai?

A defector from one of the jihadist groups in Sinai, who refused to be named for fear of assassination, answered one of these questions in an interview with Al-Monitor. He said, "Ansar Bayt al-Maqdis began to lose a lot of its weapons and ammunition in the ongoing war with the Egyptian army. [This war] also began to dry up sources of weapons, and made it more difficult than ever for members to move freely."

He said this loss "weakens the movements of [Ansar] Bayt al-Maqdis, meaning they fear the extinction or death of their ideology among those who believe in them. Movement in any direction gives them hope of survival and confrontation, including the media."

According to the defected jihadist, Sinai security officials saw those operations as "an attempt at international psychological warfare and to send messages to the world that they are still on the scene, as well as to spread rumors that there is no security stability in Egypt. This means delivering economic and security blows to the government in the form of retaliation. But this will not happen, thanks to the powerful spirit of the Egyptian people and their government to eradicate terrorism and extremism in all its forms."

Reality seems to support the previous views, as a comparison between Ansar Bayt al-Maqdis' operations a year ago with those today confirms that they are restricting themselves to specific operations. They do not go further than placing explosive devices on the roads, killing and eliminating sheikhs and tribesmen who help the army as well as those who work for external powers against them or setting up checkpoints on the roads connecting the towns east of al-Arish, where residents are inspected in a manner that is no more than show.

In a group discussion that took on the character of a tribal meeting, beside the burning embers of a fire and pots of tea and coffee, Al-Monitor met with some of Rafah's intellectuals and youth. Some of them, who declined to be identified for fear of pursuit by security forces or terrorist groups, said that Ansar Bayt al-Maqdis' maltreatment of civilians is the result of a policy of spreading fear, to control society and make it subservient under threat of death.

They stressed the danger of retaliation, whereby residents seeking revenge for personal grievances would slaughter their opponents in secret and outside of the law, attributing these criminal acts to terrorist groups. This is especially notable as tribal communities are dominated by fanaticism when it comes to revenge, when there are no legal controls on their way of life.

The strongest message from the residents was their adamant refusal to let terrorism go unchecked in Sinai. This region is susceptible to extreme ideologies, particularly if security forces continue to deal with Sinai residents through a policy of mistrust and marginalization, and expand the circle of impunity in what the speakers described as a fascist manner.

Despite the severe blows dealt by the Egyptian forces to Ansar Bayt al-Maqdis in the last year within the context of the fight against terrorism, the media presence of the group will continue to give hope for the advocates of militancy and violence to expand in Egypt, especially in Sinai, and recruit people who seek to vengeance against the oppressive authorities.