Hamas and the main armed factions in Gaza are holding regular meetings to avoid being dragged into conflict in the Sinai. 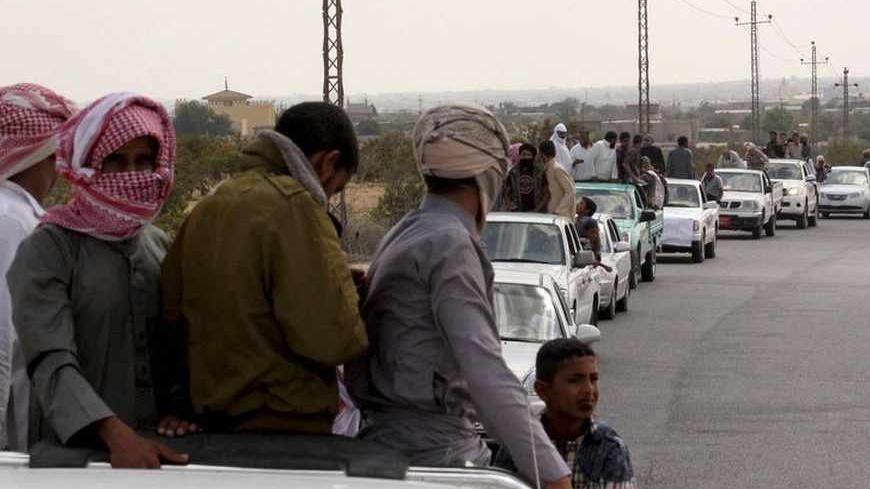 No one yet knows what effect the Aug. 9 airstrike on Rafah will have on the jihadist militants in Sinai. Thus far, responsibility for the attack has been variously attributed to either or both the Egyptian and Israeli militaries amid indications of possible high-level cooperation between them in its execution.

Another development, no less important, is that the bombardment has sent ripples throughout the Gaza Strip, where militant groups have been anxiously contemplating the possibility that future strikes might target Gaza. This would likely take place under the pretext that Gazan militant groups have been complicit in events in the Sinai, despite repeated denials, especially from Hamas, whose spokesman Sami Abu Zahri condemned Aug. 12 statements by Maj. Gen. Ahmed Wasfi, the second field commander of the Egyptian army, alleging as such.

Anxieties in Gaza regarding the strike in the Sinai have been aggravated by Israeli media reports that the attack had targeted fighters from “global jihad” groups in Gaza. According to leaks, the militants had prepared a platform for launching rockets into Israel to try to torpedo the Israeli-Palestinian negotiations that the United States is attempting to kick start.

Another rumor has it that Hamas has dispatched operatives through the tunnel network on the Egyptian border to execute an operation firing rockets into Israel. The attack would be staged from the Sinai due the constraints on Gaza due to the Egyptian and Israeli blockades, which have grown more severe with the ouster of President Mohammed Morsi, one of Hamas' most important supporters.

The Aug. 10 publication of the names of those killed in the Sinai strike assuaged some of the Palestinians' anxiety, as it made clear that the dead were all local residents, with no Gazans among them.

Nevertheless, Ansar Bayt al-Maqdis (Supporters of Jerusalem), the organization that claims the slain gunmen as members, embraces al-Qaeda's ideology and has branches in Gaza as well as Sinai. This raised the possibility that Ansar Bayt al-Maqdis' counterparts in Gaza might try to avenge the killings of the Sinai gunmen, and indeed, this appeared to have occured on Aug. 13, when a number of rockets were launched against Eilat, in southern Israel.

A security source in Gaza told Al-Monitor that Palestinian fears in Gaza are also perhaps being stirred by accusations of harboring armed elements wanted in Egypt, whose security services have intensified their campaigns in the Sinai, although Gaza's rulers have not taken sides in any domestic Egyptian confrontations. Decision makers in Gaza believe that whatever the Egyptian army does in Sinai is an internal affair that has nothing to do with either Hamas or Gaza. In their view, there is no cause for their name to be bandied about in internal Egyptian matters.

Indeed, a senior political official in Hamas informed Al-Monitor that the movement has no interest in interfering in events in the Sinai. He repudiated what he described as "media fabrications" charging Hamas with responsibility for the security disturbances there. On the other hand, he said that according to his information, Israel is foremost among all the parties meddling in Sinai.

On July 18, Hamas' leader in Gaza, Ismail Haniyeh, issued his bluntest statement yet on the subject, denying any Hamas military presence in the Sinai whatsoever. This came in response to accusations in the Egyptian media attributed to Ismail al-Hamadin, described as the most important leader of the Salafist jihadist movement in Sinai, claiming that Hamas had been directed by the Muslim Brotherhood to stir up problems between the Egyptian army and the inhabitants of Sinai.

The prevailing view in Gaza today is that the Egyptian army will not halt its military campaign in the Sinai against Salafist organizations in the short term. On the contrary, its campaign will continue for some time to come. The upshot is that tensions will continue to run high across the Israeli-Palestinian-Egyptian borders.

It should be noted that Hamas does not hold significant sway over jihadist groups in Gaza. In fact, relations between the two parties are characterized by tension and strife more so than peace and coordination. This might mean that Salafist groups will initiate bombardments of Israel from Gaza in response to what they view as a joint Egyptian-Israeli attack against their compatriots. Alternatively, the Sinai might turn into a “hot” front militarily. This is the last thing Hamas wants to see, as it would surely incur painful Israeli retaliation.

Al-Monitor attempted to obtain a response from Salafist officials in Gaza about the air strike against their companions in Sinai, but they declined. Perhaps the motivation for their discretion was, indeed, security considerations, as one of them claimed, or perhaps a desire to avoid any ancillary conflicts with Hamas.

Al-Monitor has, however, learned from military sources in Gaza that marathon meetings are being held around the clock between the various armed groups to prevent the deterioration of security in the Sinai from undermining the relatively stable security situation in Gaza. The Salafists have reportedly dismissed out of hand the possibility of initiating any conflict with Israel without obtaining consensus among the various armed factions.

These sources added that the security services in Gaza have been directed to maintain tight control over the situation on the ground, more so than at any time in the past, to prevent Gaza from being used in the internal conflict currently raging in Egypt. Just as Hamas rejects being charged with responsibility for violent, bloody acts in the Sinai, it will not allow any armed group to settle its accounts with the Egyptian authorities by launching attacks from Gazan territory, according to Al-Monitor's sources.