Will IS find popular base in Palestine?

Israel is increasingly arresting Palestinians over accusations of belonging to the Islamic State, which raises questions about IS’ presence in the Palestinian territories. 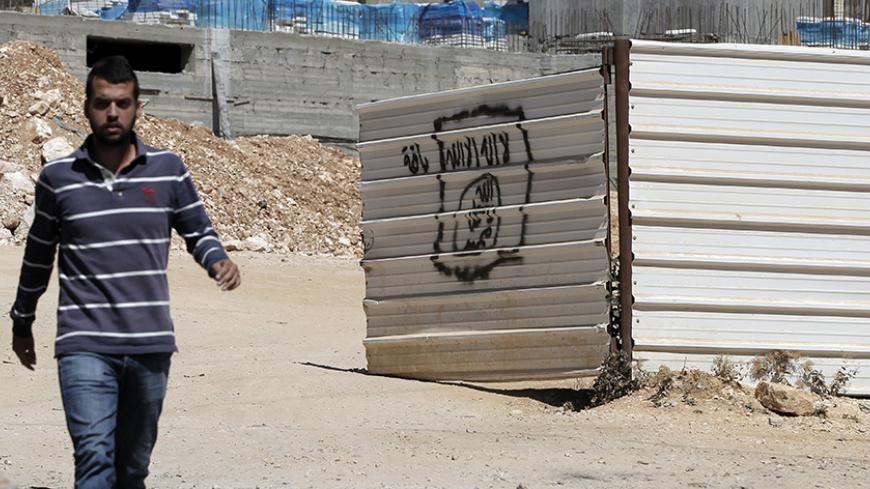 A Palestinian man walks past graffiti of the Islamic State's flag in the East Jerusalem neighborhood of Beit Hanina, July 5, 2015.

As the war on the Islamic State (IS) is ongoing in Syria and Iraq and fierce battles between IS and the Egyptian army in the Sinai Peninsula continue, IS seems to be shifting its attention toward the Palestinian territories and Israel.

On Feb. 26, Israeli newspaper Haaretz said that Israel had arrested in Israeli and West Bank cities 83 Arabs affiliated with IS in 2016, after they were caught communicating online with IS members abroad and planned to carry out attacks in Israel. Some were arrested before being able to head for Iraq and Syria where they would join the ranks of IS, while others were arrested once they came back from fighting with IS.

On Jan. 9, the Palestinian Authority (PA) arrested 22 Salafists and jihadis in the West Bank, whom it suspected of planning to plant rigged cars targeting Israelis.

Meanwhile, on March 11, the families of dozens of Salafist detainees arrested by Hamas in Gaza since December 2016 issued a statement calling on releasing their children and rejecting the arrest policy against them.

Hussam al-Dajani, a political science professor at Al-Ummah University Open Education, told Al-Monitor, “The Palestinian environment does not tolerate IS’ ideology. Most of those who follow such ideology leave the West Bank and Gaza and head to Iraq, Syria and Sinai. Some supporters who believe in IS’ principles and ideology have managed to attract additional followers into their ranks, despite the Palestinian security pursuing them.”

Dajani said, “However, the siege imposed on Gaza is believed to have created a welcoming environment for extremist groups that can easily spread under the prevailing despair and poverty and attract the youth who make up the majority of Gaza’s population.”

In terms of individuals officially affiliated with IS, the group does not seem present in the Palestinian territories as much as it is in Sinai in Egypt, Derna in Libya, Raqqa in Syria and Mosul in Iraq. According to Abu Alaaina Ansari, a leader of the Salafist movement in the Palestinian territories, there are hundreds of IS supporters affiliated with Salafist groups in Gaza, such as Jund Ansar Allah, Jaish al-Islam, Jaish al-Ummah, Saifullah movement, Tawhid and Jihad Brigades, Suyuf al-Haqq Brigades and Mujahedeen Shura Council. However, the Palestinian security services do not have accurate figures in this regard.

Speaking to Al-Monitor, Eyad al-Bozom, the spokesman for the Ministry of Interior in Gaza, denied the possibility of “security services arresting individuals based on their ideology. We only arrest those who try to harm Gaza’s security. Palestinian society — much like any other society — is influenced by ideologies. But despite this, Palestinian armed factions make it their priority to unite their efforts in confronting the Israeli occupation, without triggering internal confrontations as happens in neighboring countries such as Egypt, Syria and Iraq. The Ministry of Interior aims to rehabilitate, not punish. Through security measures and efforts to raise awareness, we try to convince the youth not to follow extremist ideologies.”

The Palestinian Interior Ministry refuses to reveal details about its efforts in confronting Salafists in the Gaza Strip. Lebanese newspaper Al-Akhbar reported March 9 that security services in Gaza arrested dozens of Salafists, aged between 19 and 25, without specifying an exact figure. Some of those arrested were tried in military courts in Gaza in early March on charges of supporting IS and owning unlicensed weapons, but no final sentences were issued.

On March 7-8, the Islamic University in Gaza held the International Conference for Science and Development, titled, “The crisis of understanding and its relationship with the phenomenon of extremism and violence."

Al-Monitor attended some of the conference’s sessions where dozens of clerics, members of the Cabinet and the Palestinian Legislative Council, and university professors participated. Guest speaker Khalil al-Hayya, the deputy head of Hamas’ political bureau, called on resolving the phenomenon of extremism by finding a suitable environment to confront it.

Youssef Farhat, a preaching and guidance manager at Gaza’s Ministry of Awqaf and Religious Affairs and head of the conference’s preparatory committee, told Al-Monitor, “The issue of extremism illustrated by IS is one of the most dangerous social troubles manifested in Islamic movements. The main reason behind [extremism] is the false interpretation of religious texts and dealing with them through uneducated means, resulting in a dangerous impact on Islam.”

He said, “This leads to violence, which is not approved by Islam, due to the misunderstanding of jihadism in Islamic movements that adopt extremism. Hamas sought to address this phenomenon by holding intellectual dialogues with supporters of such groups.”

On another note, Israel accuses Palestinians who carry out attacks against it of being affiliated with IS. This happened with Fadi Qanbar, the perpetrator of the ramming truck attack in Jerusalem on Jan. 8, and Yacoub Abu Qian, who ran over an Israeli policeman in the Negev Desert Jan. 18. Meanwhile, IS claimed responsibility for a missile attack targeting the Israeli city of Eilat on Feb. 9.

A Salafist from the West Bank who supports IS told Al-Monitor on condition of anonymity, “The group, which has hundreds of Palestinian supporters, believes that Hamas’ participation in the legislative elections in 2006 and its establishment of ordinances reflect blasphemous behavior. Hamas is committing a Sharia violation when it gives its resistance of the Israeli occupation a national Palestinian tone, instead of preaching about Islamic doctrine because religion orders Muslims to wage wars to establish a worldwide Islamic community that is not limited to a specific geographic area.”

Saleh Raqab, the former minister of awqaf in the Hamas government and a preacher who regularly holds dialogues with IS supporters in the hope of changing their minds, told Al-Monitor, “The ideology adopted by IS and Salafist movements is commonly spread due to the political failure in Palestine. Palestinians in Israel are persecuted, especially with the new law to ban mosque prayer calls approved by the Knesset on March 8. In the West Bank, the PA arrests scholars and maintains security coordination with Israel. All horizons to resist the occupation are blocked.”

He added, “Meanwhile in Gaza, supporters of IS and other Salafist groups accuse Hamas of failing to apply Islamic Sharia. In this regard, I have recently met with dozens of individuals held in detention centers in Gaza, some I succeeded in persuading to let go of their convictions — others I couldn't.”

Although IS’ ideology is somewhat spread among Palestinians, a poll conducted in July 2015 by the Arab World for Research and Development revealed that an overwhelming majority of 93% of Palestinians believe IS does not represent true Islam and think the group’s action are unjustified.

A security official in the West Bank told Al-Monitor on condition of anonymity, “IS is not present in the West Bank as Palestinians believe it is a terrorist group. If there ever is any information about an individual affiliated with IS, they will be immediately arrested. So far, the group has failed to create a military cell here and we received strict instructions from high-ranking political and security officials in the PA to be as firm as possible in handling any signs of IS cells in the West Bank.”