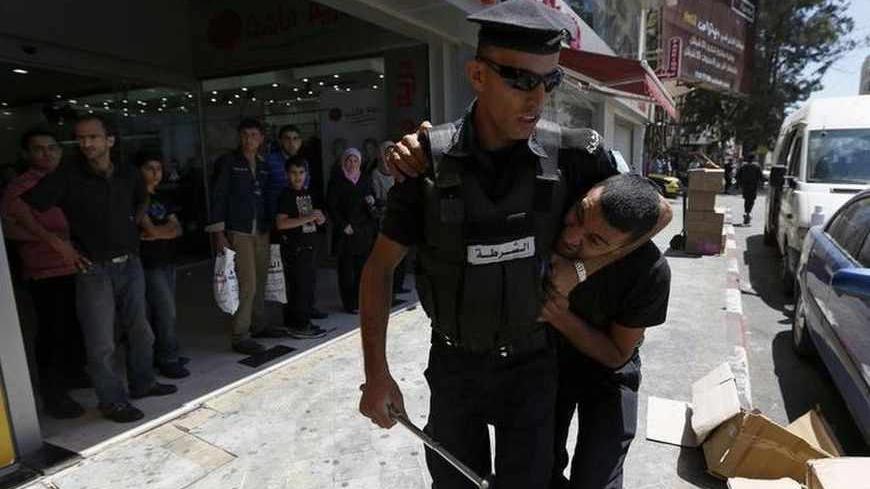 A Palestinian policeman detains a protester during a demonstration against the renewal of stalled peace talks with Israel in the West Bank city of Ramallah, July 28, 2013. Israel was expected on Sunday to approve releasing more than a hundred Arab prisoners as a step to renew stalled peace talks with the Palestinians ahead of plans to convene negotiators in Washington later this week. - REUTERS/Mohamad Torokman

The decision did not come without opposition, with Palestinian Authority (PA) security forces violently dispersing a protest in Ramallah led by the Popular Front for the Liberation of Palestine (PFLP) against the renewed talks. Hundreds of protesters chanted against the PA and the resumption of negotiations as they tried to reach the PA headquarters.

Interviewed by Al-Monitor, Rabah Mhanna, a senior member of the PFLP political bureau, strongly condemned the PA crackdown on its Sunday protest, and lashed out at the PA, which, he said, “is deeply implicated in shameful collaboration with the Israeli occupation.”

“The crackdown on our protest yesterday will only make us more determined to speak out against the PA’s collaboration with Israel,” Mhanna told Al-Monitor, adding: “We refuse negotiations with Israel and call on all PFLP members and all political parties to join protests against the resumption of negotiations and the PA’s policies which will only compromise more and more of our rights.”

Calling it a “political suicide,” the PFLP official strongly denounced any effort to resume the peace negotiations with Israel saying they “will only lend Israel more legitimacy and give it free hands to commit more crimes while providing a cover for its ongoing atrocious policies in the Gaza Strip and the West Bank.”

Palestinians have been plagued by a political split since 2007 with two governments, one controlled by Hamas in Gaza and another dominated by Fatah in the West Bank.

“We call on all Palestinian national and Islamic groups to take full responsibility for achieving national unity and bring the Palestinian cause back to the United Nations. … This is in light of a strategic national and democratic framework that will reinforce our struggle and ensure worldwide support for Palestinian rights,” the senior PFLP official commented.

Similarly, Palestinian Islamic Jihad has also rejected the resumption of negotiations, calling it “a conspiracy being woven in light of the turmoil sweeping across the Arab region.”

Speaking to Al-Monitor, an Islamic Jihad leader, Khader Habib, said that the peace talks lack clear terms of reference due to Israel’s refusal to address the Palestinians’ main demands. However, asked about what substitute strategies the Islamic Jihad could possibly offer the Palestinian leadership, Habib agreed that without first ending the national split between Palestinian factions, any talk of political solutions is premature.

“We believe that the political divisions have extremely affected and limited our choices,” the Islamic Jihad leader stated, adding: “We haven’t been able to move forward one step due to the division of our efforts and strategies. Palestinians have to be able to appreciate the devastating impact the division has caused us before we can speak about political solutions and devising national strategies.”

Habib explicitly argued that as a substitute for negotiations, and rather than one party imposing one political vision on the rest, Palestinians should step up their efforts to formulate one political program agreed on by all Palestinian representative groups.

“When Palestinians are united around one political program, this will definitely strengthen their position, and we will have more leverage to negotiate from a stronger position,” Habib illustrated.

In the same vein, Gaza-based writer and human rights worker Mustafa Ibrahim argued that the Palestinians have a variety of strategies which they can pursue as an alternative to negotiations. According to Ibrahim, regardless of what this policy could be, what is essential is that such a policy should be reached through political dialogue between Palestinian factions. “The new strategy has to be the outcome of a democratic process, not a unilateral decision made by one or another party,” Ibrahim explained.

Ibrahim contended that it is about time Palestinians stopped relying on the US, which is by no means an honest broker in this conflict. The new Palestinian leadership should attempt new possible avenues such as the UN, international courts including the ICC and ICJ, the Non-Aligned Movement and the international boycott movement.

Another political dissident and university professor of postcolonial studies at Gaza’s Al-Aqsa University, Haidar Eid, argued that the only viable option left for Palestinians at this stage is “to stop all negotiations and pursue an anti-apartheid struggle following the South African model.”

“A substitute policy would be precisely what happened in South Africa in the 1970s and 1980s. It took the international community 20 to 30 years to heed the repeated calls for a boycott of the apartheid system governing South Africa at the time until it met its obligations under international law.”

Eid also pointed out that negotiations detrimentally give the facade of two equal parties negotiating a political solution, when in fact this is a case of a military occupation and a full-fledged apartheid system.

Palestinians remain sharply skeptical of the prospects of peace talks with Israel, given previous attempts that have amounted to very little and a continuing occupation. While many Palestinians are divided over how best to approach the Israeli occupation, there appears to be some agreement among leftists, liberals and Islamists alike that a national consensus should be agreed to before proceeding unilaterally with any peace initiative.