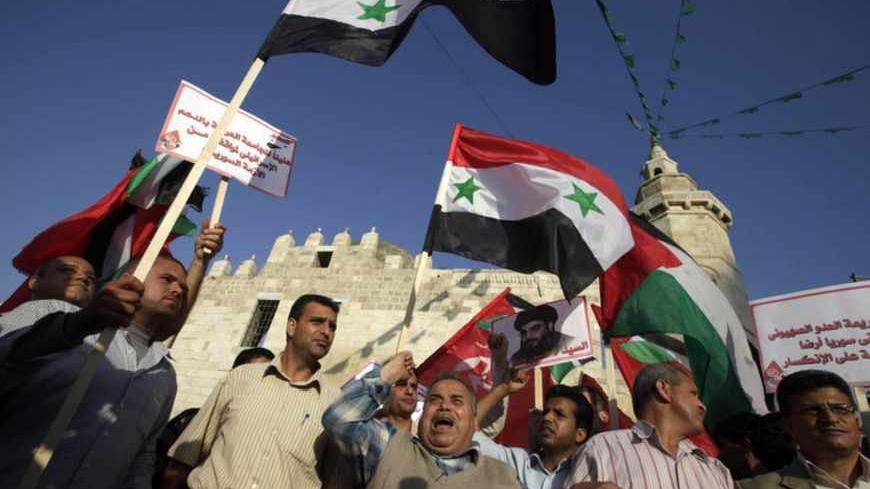 Islamist and leftist Palestinian parties have strongly denounced two recent Israeli air attacks in Syria. The first strike took place on May 3, reportedly targeting a shipment of missiles bound for Hezbollah near the Lebanon border. The second attack occurred on May 5 and, according to the BBC, hit an area that “houses numerous military facilities, including the Jamraya research center, designated by Syria as a scientific research center.”

Yasser Abd Rabbo, a senior official in the Palestine Liberation Organization, condemned the Israeli strikes as “unjustifiable attacks on the sovereignty of Syria” and called on all parties in Syria to reach a political solution to put an end to the fighting there.

While expressing sympathy for the civilian victims of the Syrian conflict, Hamas issued a similar statement, calling on the involved parties to stop the bloodshed. It also strongly decried the attack on Syrian territory, referring to it as part of Israel's “terror policy in the region.” The Syrian government had once been Hamas’ major ally in the region.

In Gaza, in an interview with Al-Monitor, Hamas spokesman Fawzi Barhoum said that the Israeli airstrikes should be seen as an extension of its belligerent policies and earlier attacks against other countries in the region, specifically, Iraq, Lebanon, Sudan, and Tunisia. Israel, Barhoum argued, is bent on destroying any strong Arab country to ensure that it remains the sole major and unparalleled power in the region.

“The Israeli attacks should be forcefully condemned by the international community. We reject any Israeli interference in Syrian affairs under any circumstances.… We call on all Arab countries to take a unified stance against the Israeli aggression to destroy Syria’s military infrastructure,” the Hamas spokesman said.

According to the Ma’an News Agency, Mahmoud al-Zahar, a senior Hamas figure, issued a similar statement, calling on the Arab states to “unite against the Israeli attacks on Syria.” Zahar also advocated that Egypt, Iran, and Turkey intervene to bring about a political solution to end the crisis in Syria.

The Iranian-backed Islamic Jihad in Gaza offered that the strikes reveal indisputably that Israel is the “biggest threat” to all Arab and Islamic countries in the region. “Israel is attempting to reshuffle the cards with the Syrian situation,” Khoder Habib, a senior leader with Islamic Jihad told Al-Monitor. He added, “The Israeli strikes are a transgression of all the redlines in the Syrian context and is a blatant and unjustifiable violation of the sovereignty of a major Arab country. We hold Israel responsible for any regional escalation these attacks might lead to.”

Habib asserted that the motivation behind the Israeli attacks was “neither moral nor humane,” but meant to upend the balance of power in the region in its favor. Its leaders, he said, will try to destroy any power deemed a threat to it.

Speaking with Al-Monitor by phone, Saleh Zidan, a DFLP politiburo member, contended that Israel’s attacks were carried out under US auspices and support and were intended to “wreak more destruction” on Syria and exacerbate an already unwieldy political and military situation. “These attacks constitute an outrageous crime. They are a violation of international law and of the sovereignty of Syria. They are also an attack against all Arab countries. The conflicting parties in Syria should respond to this by coming together and thinking through a political solution that should bring to an end all the destruction and bloodshed that has engulfed Syria,” Zidan said.

Rabah Mhanna, a senior member of the PFLP politiburo, condemned the Israeli attacks while encouraging support for the Syrian people’s demands for freedom and democracy. The latter, he asserted, should not be done by forming alliances with the United States and Israel, which, he contends, are the real enemies of the Arab peoples’ aspirations.

“While some think it is only a conspiracy theory, it is actually happening. These are imperialist attempts, backed by some regional powers, such as Turkey and Qatar, to weaken the Syrian stance in the face of the imperialist and Zionist project and its support for resistance. I still believe in the Syrian people’s right to democracy, freedom and justice,” Mhanna told Al-Monitor by phone.

Mhanna said that the PFLP had organized a rally in the southern Gaza city of Khan Younis on May 7 to protest the Israeli attacks on Syria, but Hamas government police forcibly dispersed it. Jamil Mezher, another PFLP official, condemned the police repression, which resulted in three injuries, and said they would contact the government to clarify why the rally was halted.