Palestine's main leftist party has broken with the official Palestinian stance of neutrality and endorsed the removal of Mohammed Morsi from power. 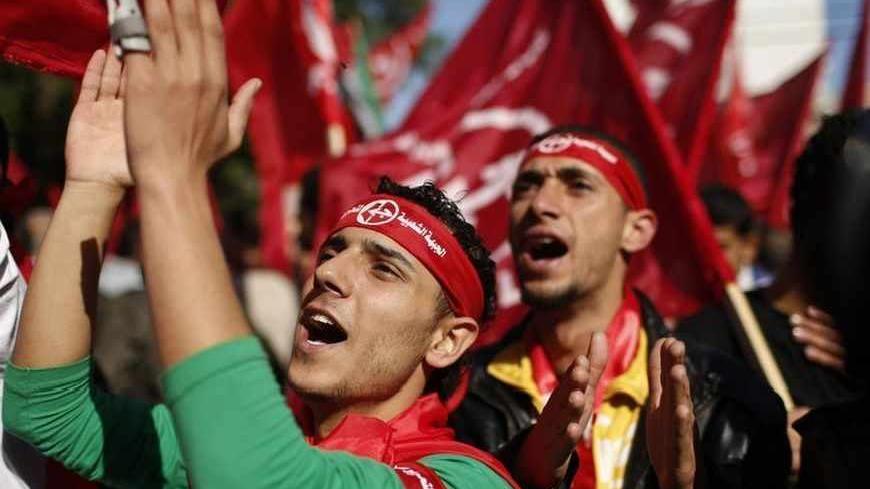 Palestinians take part in a rally organized by the Popular Front for the Liberation of Palestine (PFLP) to celebrate the 45th anniversary of its founding in Gaza City, Dec. 6, 2012. - REUTERS/Mohammed Sale

Hamas and other Palestinian factions in the Gaza Strip have tried to adopt a neutral stance toward recent developments in Egypt.

Palestine’s main leftist group, the Popular Front for the Liberation of Palestine (PFLP), however, was unequivocal in voicing its support for what it termed “the demands and the aspirations of the Egyptian masses,” in clear reference to the ouster of President Mohammed Morsi and the Muslim Brotherhood from office.

In an interview with Al-Monitor, a member of the central committee of the PFLP in Gaza, Jameel Mezher, described recent events in Egypt as a “victory” for the Egyptian people and their demands. The leftist group, he said, supports the Egyptian people’s choice and their chief demands for freedom and social justice.

Mezher refused to call Morsi’s removal from office by the Egyptian military a “coup.”

“We are with the choice of the people and with the Egyptian people’s choice and the fulfillment of their demands for democracy, freedom and social justice,” the PFLP senior leader told Al-Monitor.

“Legitimacy,” he added, “doesn’t lie only in the ballot box. Legitimacy lies in the people’s calls and their aspirations; it is the millions who filled Egypt’s streets and squares demanding change and calling for freedom and political inclusion.”

Mezher believes that the Palestinians could find inspiration in the Egyptian experience, saying there is a growing movement in Gaza and the West Bank which is gaining force over time to end the internal Palestinian split between political rivals Hamas and Fatah, the two largest Palestinian factions.

“There are growing calls among the residents in the Gaza Strip and the West Bank calling for ending the division,” Mezher stated, adding, “What is needed is more coordination and political mobilization in order to pressure both parties into abandoning their own group interest and yielding to the people’s demands. We’ll support any such movement.”

Anticipating an uprising against the political schism between the Gaza Strip and the West Bank, Mezher commented: “What happened in Egypt is a victory for the Egyptian people, and certainly, like Egyptians, our people are looking forward to ending the political division. It won’t be long before the Palestinians rise against the miserable political situation which is the result of continuing disunity. The Palestinians will rise both in Gaza and the West Bank since unity is essential for our people to continue their struggle against the Zionist project.”

Similarly, albeit in less obvious terms, Rabah Mhanna, a member of the political bureau of the PFLP in Gaza, told Al-Monitor that while this is an Egyptian internal issue, the Palestinian leftist faction “supports and fully respects the choice of the people in Egypt.”

Mhanna pointed out recent developments in Egypt will definitely bear upon Palestinian-Egyptian relations, particularly in the Gaza Strip, which is geographically bound to Egypt and is controlled by the Islamist movement Hamas, a close ally and an offshoot of the deposed Morsi’s Muslim Brotherhood.

According to Mhanna, the PFLP’s stance on Egypt is the official position of all other Palestinian factions including both Hamas and Fatah and adopted on July 4 which, he said, is “to side with the people’s choice and what they choose for themselves but to denounce any acts of violence that could rip the country apart.”

Trying to tread a neutral path, the PFLP official further added: “What’s going on in Egypt is an Egyptian issue which we cannot interfere with. We are standing at an equal distance from all Egyptian political groups — which all support the Palestinians and their cause. The Palestinians have no interest in supporting one group against the other; however, we do support the choice of the Egyptian people and respect it.”

In addition, speaking to Al-Monitor, Kayed El-Ghoul, a member of the central bureau of the PFLP in Gaza, said the change happening in Egypt is the demand of the Egyptian people.

The PFLP leader also called on Egyptian political parties to resolve their differences through peaceful dialogue and democratic means without resorting to violence which would only serve to weaken the country. He stated:

“We side with the demands of the people and support their right to decide their future and the shape of their government and political system. … We are only concerned about increasing acts of violence which no one stands to benefit from. Such acts will only serve to divide and weaken the country.”

PFLP officials were in agreement that recent events in Egypt will have a significant impact on regional dynamics and will help shape the future of the whole region. The change in Egypt, they said, will also have positive long-term impact on the Palestinian situation in the Gaza Strip.

Jameel Mezher, said a positive change in Palestinian-Egyptian relations is likely to take place after the recent change in Egypt. “In fact, what’s happened in Egypt is in the Palestinians’ interest. It will have a positive impact on our situation in the long term,” he said.

Mezher also called on Egyptian authorities to not let the unrest in Egypt take its toll on the Palestinians in Gaza, “who live in dire humanitarian conditions and are at risk of an impending humanitarian and environmental crisis if the closure of the Rafah border crossing continues.”

The senior PFLP leader told Al-Monitor: “We call on the Egyptian authorities to open the Rafah border crossing and ensure that the Palestinians in Gaza aren’t harmed by the change in Egypt. The PFLP hopes that Egypt will continue to play its leading role as a patron of the Palestinians and their rights as it has always been.”