PFLP on Defense in Gaza Over Ties to Assad

Left-wing factions in Gaza have distanced themselves from the PFLP-GC in Syria, who many blame for the violence in the Yarmouk refugee camp, Mohammed Suliman reports from Gaza. 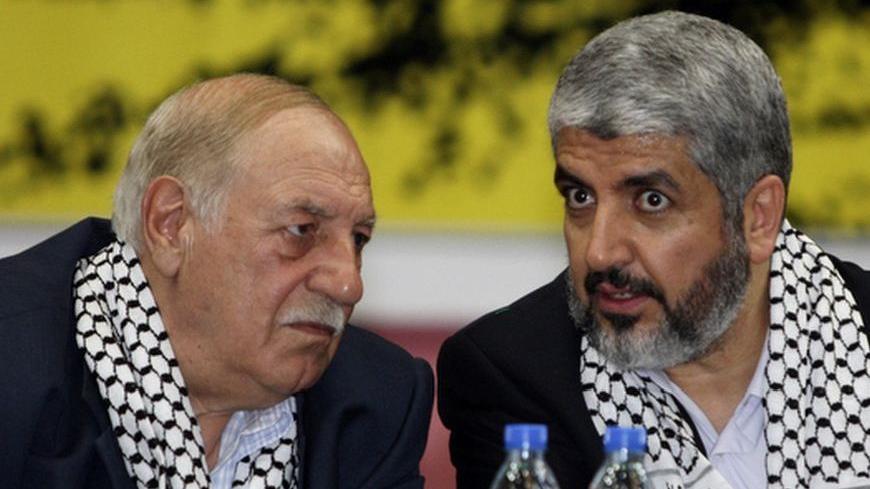 Although some Palestinian groups, both within and outside Syria, had initially insisted this was an “internal Syrian issue,” the relevance of the Palestinian cause to the events in Syria made it difficult to remain silent. Palestinian groups began taking a position on the Syrian crisis. Some sided with the regime, while others, notably Hamas, backed the uprising and denounced its former ally in the Syrian regime.

One remaining Palestinian ally of Assad is the left-wing Popular Front for the Liberation of Palestine — General Command (PFLP-GC).  In fact, its notorious pro-Assad loyalist leader Ahmed Jibril has sent his group to fight alongside the Syrian regime on several occasions during the uprising. PFLP-GC has long been close to the Syrian regime, having splintered from the mainstream PFLP of George Habash in the late 1960s.

Following the recent attacks by government forces on the Yarmouk refugee camp, the largest Palestinian camp and home to nearly 500,000 refugees, many placed the blame on the PFLP-GC inside Yarmouk for involving the Palestinians in Syria’s internal conflict.

The attacks drew rebuke from fellow leftist groups and PFLP affiliates in Gaza, who largely denounced the attacks on the Yarmouk camp, and Jibril’s supposed role in the violence.

Mariam Abu Dakka, member of the political bureau of the PFLP in Gaza, said that the PFLP — the largest Palestinian leftist faction — has consistently stressed the need to keep Palestinian refugees in Syria out of this conflict. She condemned the attacks on the Yarmouk camp as “entirely unjustified and a violation of the Palestinian refugees’ rights.” While it was her view that the Syrian people should have the right to self-determination, she still affirmed this was a completely Syrian matter that only Syrians could resolve.

In response to whether it is true that Ahmed Jibril of PFLP-GC was responsible for involving the Palestinians in the conflict in Syria, claims that the attacks on the camp were justified due to rebel activity are “a distorted interpretation of the events on the ground and is only meant to justify the aggressor’s attacks on defenseless refugees inside Yarmouk,” said Abu Dakka.

The PFLP official went on to criticize Jibril’s faction as unrepresentative of the Palestinians in Syria.

“Everyone knows the true size of PFLP-GC. They are not representative of the Palestinians. Their acts only represent them, and in fact their membership in the Palestine Liberation Organization (PLO) has been frozen for some time now,” said Abu Dakka.

Similarly, Rabah Mhanna, a senior member of the political bureau of the PFLP, affirmed the same position. “Ahmed Jibril does not even belong to the Palestinian Left. He is closer to the extremist right-wing groups than to revolutionary leftist ones.”

The Yarmouk camp in Damascus has witnessed violent clashes and heavy shootings on several occasions since the beginning of the Syrian uprising. The Syrian Army has also stormed several other Palestinian refugee camps in Syria, including in Deraa and Al-Ramel in Latakia. Nonetheless, many saw the shelling of Yarmouk as an “unprecedented event” that sends clear signals about the impending fall of the Assad regime.

Adel El-Hakim, a former member of the political bureau of the PFLP-GC in Gaza, told Al-Monitor that the shelling of the Yarmouk camp by government forces strips the Assad regime of any credibility he might have ever had as a patron of Palestinian rights. The regime, he said, was stirring violence in the Palestinian refugee camps, particularly in Yarmouk.

“Although some Palestinians had been trying to maintain a neutral position regarding the conflict in Syria, the shelling of Yarmouk by Assad forces left no chances to be neutral. This is such a deplorable and completely unacceptable act. The government forces are totally responsible for the security of the camp and the safety of the Palestinian refugees inside it.”

Ramzi Rabah, an official of the Democratic Front for the Liberation of Palestine (DFLP) in Gaza – the second largest leftist Palestinian group and also an offshoot of PFLP – stressed the urgency to “neutralize” the refugee camps in Syria.

Rabah stated that “as a matter of fact, the Palestinians are not party to this conflict, and we have called on all parties in the conflict to keep the Palestinian refugees out of the internal Syrian affair.”

Rabah also highlighted the need to find a political solution to the Syrian conflict in order to stop the bloodshed and save the country, which has been wracked by violence for nearly two years.

“Although we support the Syrian people in their quest for freedom, justice and democracy, we [in the DFLP] support a political solution to this conflict and believe that the way to go forward is to solve things diplomatically.”

The need to find a political solution was also pointed out by Kayed Al-Ghoul, an official of the PFLP in Gaza. Al-Ghoul was reluctant to speak on the Syrian file, only to state that the “violence is utterly destructive and will not serve the interests of any of the conflicting parties.”

The position of the leftist factions in Gaza seems to be consistent with regards to Syrian affairs. Although some groups have been more outspoken than others in denouncing the acts of the government forces of Bashar Al-Assad, others have treaded carefully, focusing on the neutrality of the Palestinians in the conflict.

Mhanna of the PFLP said the official Palestinian stance was representative of both the PLO and Islamic Jihad: Supporting the Syrian people in their quest for dignity and freedom; opposing all outside “suspicious” interventions in internal Syrian affairs, and finally, as Palestinians, staying out of this internal Syrian conflict.

Mohammed Suliman, 23, is a Gaza-based writer and human rights worker. Mohammed has recently obtained a master’s degree in human rights from the London School of Economics. His writings appeared on different online publications including Al Jazeera English, openDemocracy, the Electronic Intifada and Mondoweiss. He can be followed @imPalestine.