Some Palestinian refugees from Syria have endured hardships and sought refuge in Gaza, reports Mohammed Suliman. 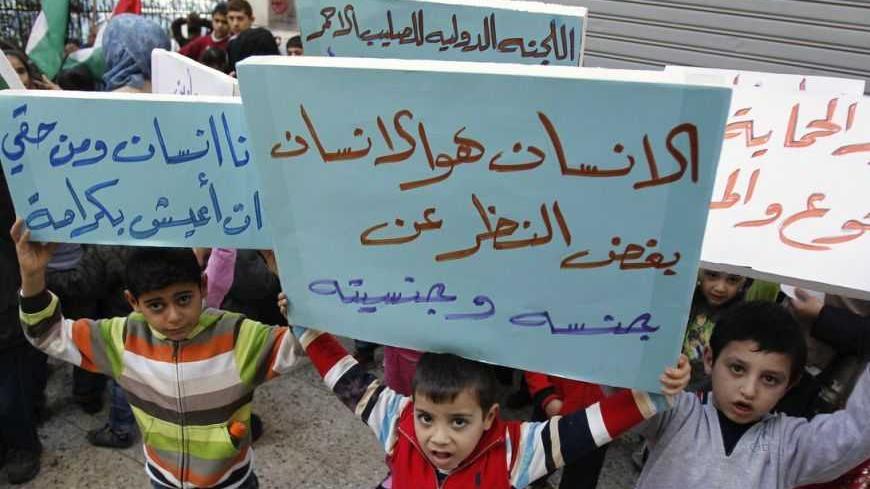 Palestinian children who were living in Yarmouk Palestinian refugee camp before fleeing Syria, hold banners during a protest in Beirut, Jan. 17, 2013. Banners read, "Man is man, regardless of gender and nationality" (C), "I am a human and I have the right to live with dignity" (L) and "We want protection from hunger and diseases." - REUTERS/Sharif Karim

However, because of the bloody civil war in Syria and the violence which has engulfed the country, hundreds of thousands of Syrians have fled Syria to neighboring countries, mainly Lebanon and Jordan. Of these refugees, a huge number are Palestinian refugees who number in the thousands (though there are no official data).

While Jordanian authorities have prevented Palestinian refugees fleeing the conflict in Syria from entering the Hashemite Kingdom, and while Lebanon, for several reasons, remains the most uninviting place for Palestinian refugees, some of these Palestinian refugee families have found themselves enduring different hardships as they made their way to nowhere but to the Gaza Strip.

Nonetheless, as Hussam Manna', the chief of UNRWA's field relief and social services program, told Al-Monitor that the actual number is significantly higher. “These numbers do not accurately reflect the actual number of Palestinian refugees from Syria who have arrived in Gaza,” Manna’ stated, “since we only count those families who have already visited our several UNRWA offices across the Gaza Strip to be officially registered at our records, and there are too many of them who have not been registered by our offices yet.”

Issam arrived in Gaza along with her son, 19, and two daughters, 16 and 23, almost two months ago. Issam, who used to live in Al-Maidan district in the Syrian capital, now lives at her brother’s house in Al-Nasr district in Gaza City, who she says has taken it upon himself to provide her and her family with everything they need. Describing the situation in Syria, Issam said, “there was literally no safe place in Syria,” which made her escape the country for fear for her and her children’s lives.

“All of Syria is under fire,” the 48-year old woman asserted, “shelling was everywhere; not a single day [since the civil war started] had passed without the sound of bombs, mortars, and war jets filling the space. Our neighborhood was constantly targeted by the Syrian Army’s jets. The people inside the camp used to stay together and spend the night in one or two houses to give comfort to one another [...] the Syrian Army soldiers simply have no mercy; they’re not human.”

Umm Issam told Al-Monitor: “I immediately took a flight to Cairo and stayed there for about a month although I didn’t have enough money with me. I only wanted to save my family’s life. I stayed in Cairo until Abu Ahmad [my brother] arrived from Gaza and took us with him back to his house in Gaza.”

Similarly, Subhi Murad, 31, said that his journey to Gaza was “insufferable.” Murad, who has arrived in Gaza along with his wife and 3-year-old daughter about a month ago, fleeing the violence which has engulfed the Yarmouk Palestinian refugee camp, spent three days trying to leave Syria and another six days on the Libyan-Egyptian borders; he then managed to enter Egypt and stay there for one day before he finally crossed into Gaza.

Reiterating what Issam mentioned, Murad described the atrocities he has witnessed in Yarmouk. “I don’t know where to start from,” Murad said. “The atrocity of the Assad army is beyond comprehension. People in Syria are prohibited from the most basic stuff, from food, water, electricity; many even don’t have shelters. Everything you see on TV is real; only that it is even worse in reality.”

Leaving the Yarmouk camp was not an easy decision for Subhi and his family who spent all their life in the largest Palestinian refugee camp. Subhi said he left the Camp under his wife’s pressure, leaving behind the rest of his family who refused to leave their houses in Yarmouk. “I was so scared for my wife and my daughter’s lives; it was the first time they went through such horrendous conditions, and I had to yield to my wife’s pressure to move to a safer place, but there was no such place inside Syria,” the 31-year old man said.

He added: “The rest of my family who thought there is no better place for them than Yarmouk are now scattered around different areas across Syria, and I’ve been trying to get in touch in them for over a month. I am so worried about them.”

Extremely disappointed with life in Gaza, Murad stated he plans on returning to Syria as soon as the opportunity arises. “To live under war and destruction is more tolerable for me than to live stripped of my dignity,” he said sorrowfully. “I have no money, no job, no house, and nothing ... no one seems to care about us here.”

When we asked Manna’ to clarify the situation of the Palestinian refugees from Syria, he responded that United Nations Relief and Works Agency (for Palestine Refugees in the Near East)’s services can provided to only officially registered refugees; therefore, “the problem lies with the fact that they have not yet registered themselves at any UNRWA offices in Gaza.”

“We follow the official UNRWA policy: any Palestinian refugee who is registered at our official UNRWA records has the right to benefit from UNRWA’s services as far as they live in one of UNRWA’s five areas of operation. The situation we’re having in Gaza isn’t a special one that requires emergency relief programs since the number of refugees which we have so far is limited,” Manna’ illustrated, “meanwhile, any Palestinian refugee who comes from Syria will receive the same exact treatment which a normal refugee in Gaza has, i.e. they will receive the same amount of social services following UNRWA’s official assessment of their situation.”

Mohammed Suliman, 23, is a Gaza-based writer and human rights worker. Mohammed has recently obtained a master’s degree in human rights from the London School of Economics. His writings appeared on different online publications including Al Jazeera English, openDemocracy, the Electronic Intifada and Mondoweiss. He can be followed@imPalestine.