Syrian women who have fled the war in Syria to Gaza with their Palestinian husbands are denied institutional financial aid, under the pretext of being part of a Palestinian family not eligible to receive assistance dedicated to Syrian refugees. 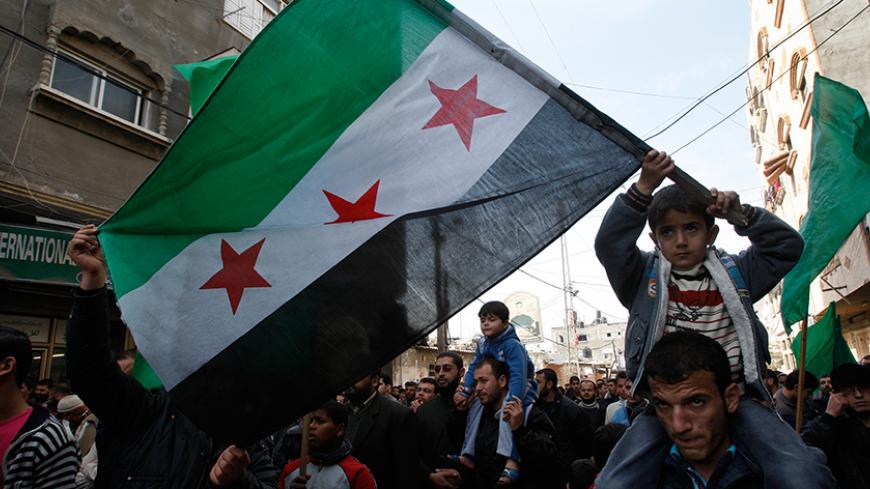 A Palestinian boy waves a Syrian opposition flag during a rally organized by the Hamas movement in the northern Gaza Strip, in support of the Syrian revolution, Jan. 18, 2013. - REUTERS/Ahmed Zakot

GAZA CITY, Gaza Strip — Rent is accumulating for the family of Asmaa al-Qassar, a Syrian woman who has not been able to find a job ever since she fled the fighting in Syria to the Gaza Strip in September 2011 with her Palestinian husband and two children. Qassar, who lives in the Bureij refugee camp in central Gaza, fears she will not be able to pay her rent, which is 550 shekels ($145) per month, and the electricity and water bills that add up to about 100 shekels ($26) per month.

Qassar, who has a diploma in math, told Al-Monitor that she has been looking for a teaching job in private schools and preschools ever since she arrived in Gaza, to no avail. She feels that she has reached a dead end and decided to save up as much as she could from the salary of her husband — who found a job as a photo editor at a local agency three months after they arrived in Gaza — which amounts to $400 a month.

“When I came to Gaza, I lived in an apartment in the Bureij refugee camp, where rent is cheaper than in Gaza City and its suburbs. We struggled to replace some of our furniture and clothes that we had lost in our Syrian home in Jdeidet Artouz, in Rif Dimashq,” she said.

Qassar was denied the three-month employment opportunity provided by the United Nations Relief and Works Agency for Palestinian Refugees in the Near East (UNRWA), while her husband was granted the permit a year after their arrival in Gaza. According to UNRWA’s regulations, only one member of a single family is allowed a temporary job, so long as the family member is registered as a refugee.

Mona Mrad, a Syrian woman whose husband's family home was destroyed during the Israeli war on Gaza in 2014, received a temporary work assignment from the Gaza Ministry of Labor under the provision of aid to war-affected people. Mrad, along with her husband, left Damascus and sought refuge in the Gaza Strip.

In April 2014, UNRWA — which is encountering a financial deficit — had stopped providing the quarterly payout of $1,200 for rent to Palestinian refugees from Syria.

Qassar said that she is finding it difficult to make friends in Gaza despite the hospitality of its people — mainly because of the different customs and traditions, but also for fear of getting attached to Gazan friends, which would make it harder for her to leave in the future.

According to the Follow-up Committee for the Affairs of Palestinian-Syrian Refugees in Gaza, the number of Syrian families in Gaza reached around 230 in mid-2015. Six families of Syrian nationality left the Gaza Strip through the Erez crossing on May 17. The committee expected other Syrian families to leave as well, noting that a large number of Syrians from Gaza had already illegally migrated by sea to European Union countries.

According to the Euro-Mid Observer for Human Rights, the number of immigrants that reached Italy in early 2015 is estimated at more than 8,500 — 2,200 of whom are Palestinian and Syrian refugees from Syria. The illegal immigration phenomenon from the Gaza Strip started during the latest Israeli war in 2014.

Atef al-Amawi, the head of the Follow-up Committee in Gaza, told Al-Monitor that the Syrian refugees’ economic situation in Gaza is extremely bad. He said, "The Syrian refugees suffer unemployment and are unable to pay rent, not to mention the lack of financial means for university education and lack of access to health insurance, which makes them reconsider visiting a health center."

He added, “The number of refugees benefiting from aid provided by the EU, such as food parcels, is much less than the total number of refugees [in need]. Unfortunately, not everyone benefits from UNRWA's services, such as the rent allowance or the so-called housing aid, especially those who do not have the refugee card that is locally recognized as the 'supply card.' No Syrian refugee has benefited from UNRWA’s temporary employment opportunities.”

Amawi blamed the national consensus government for its lack of commitment to its decision to provide financial aid worth 1,000 shekels ($260) for each Syrian family in Gaza for six months. This decision, which has yet to be implemented, was announced by the government on April 6.

“Minister of Labor Mamoun Abu Shahla linked the Syrian refugees in Gaza receiving financial aid to the implementation of the unemployment project provided by the Ministry for Refugees. Although a number of refugees have been working since April, financial assistance has not been distributed and no one has received any money from the consensus government,” he said.

The Hamas government had spent between 800 and 1,000 shekels since October 2014 on Syrian families in Gaza, until the consensus government took the reins in Gaza in May 2014.

Minister of Labor in the Palestinian consensus government Abu Shahla told Al-Monitor that his government made the decision two months ago to give each Syrian family in Gaza 1,000 shekels. However, only 28 families received aid out of a total of 300 families that arrived in the Gaza Strip, which included families of Palestinian origin that returned to Gaza due to the ongoing conflict in Syria.

Statistics on the number of Syrian families in Gaza differ, and the financial aid they receive and the government plans to integrate them in Gaza are unclear and lack explanation. This has prompted many refugees to migrate, both illegally and legally. In addition, it has increased the resentment of married Syrian women in Gaza, who are marginalized when it comes to the services provided by the government under the pretext of being married to Palestinians, thus making them members of Palestinian families and not eligible for assistance.