Palestinian refugees from Syria and Syrian refugees who came to the Gaza Strip to escape the war in Syria are caught in Israel’s war on Gaza. 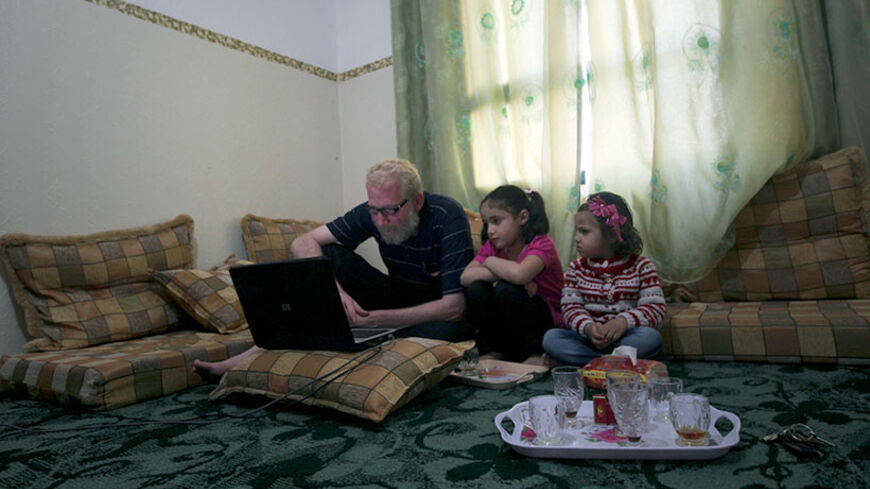 A Palestinian refugee from the Yarmouk refugee camp in Damascus sits with his daughters in their rented apartment in the Jabaliya refugee camp in the Gaza Strip, April 16, 2013. - MAHMUD HAMS/AFP/Getty Images

BEIT HANOUN, Gaza Strip — Young engineer Abdullah al-Baltaji had only one choice: leave Syria and find shelter in the Gaza Strip after rockets hit his home and private office in the Mezze neighborhood in the Syrian capital, Damascus. He settled with his family in the Shajaiya neighborhood in the eastern Gaza Strip less than a year ago, accompanied by his wife, twin daughters and son. They lived in an apartment built by the Gaza government.

Baltaji fled Syria to protect his family from the bloody war that has been raging there for more than three years. However, this was just a prelude to a more dangerous phase that awaited him in the Gaza Strip.

“My apartment was destroyed a few months after its construction, just like the other houses in the neighborhood, at the onset of the Israeli war that started over a month ago. I was seriously injured by the splinters of a tank shell that hit me while I was in my apartment. I had a lacerated tendon in my foot, and I couldn’t move. I was left permanently crippled,” he said.

Baltaji cannot forget the day when his family’s apartment was reduced to flames, just like the other houses in the Shajaiya neighborhood that were directly shelled. The family and dozens of others escaping their houses and seeking refuge hid in one room that was barely nine meters (29.5 feet) wide and only three meters (10 feet) away from where the rockets fell.

“The Israelis committed a massacre in our house, killing more than eight [people]. Dozens of people sought shelter from the shelling in our house. But the shelling affected us as well. Several people, including my wife and I, were injured by the rockets,” he said.

Baltaji has been moving between apartments because he cannot find an apartment to rent; prices have doubled following the massive displacement from the neighborhoods of eastern Gaza. He now hopes to leave the Gaza Strip for a country where there is no fighting.

“We left a deadly war in Syria and we arrived in Gaza, where we were met with the Israeli occupation’s annihilation policy. I hope to run away with my small family to anywhere but here and work in any job, no matter how mediocre. It is not out of weakness, rather out of fear for [the safety of] my family,” he said.

Atef al-Amawi, a Palestinian refugee from the Yarmouk refugee camp in Damascus, arrived in Gaza about two years ago with his family of 10, including his wife, three daughters, son and grandson. The family settled in two rented apartments in Beit Hanoun in northern Gaza. Amawi, who heads the follow-up committee for refugees who fled from Syria to Gaza, told Al-Monitor, “My wife and I owned a factory for children’s clothes in Syria, a big apartment and other properties, including a car.”

Amawi added that the two apartments he rented with his son in Beit Hanoun were destroyed at the onset of the Israeli war on Gaza over a month ago due to the Israeli air raids. They only managed to recuperate some small belongings.

“We left just in time. The Israeli tanks were so close. We fled to a neighboring area, to my brother’s house. But, we had to leave once again because of the shelling,” he said.

The Gaza Strip was a haven for Palestinian refugees in Syria and for some Syrians — with around 1,000 refugees, including 260 families, 20 of whom are of Syrian origin, according to Amawi — until the war made it an undesirable destination. In an apartment that does not exceed 100 square meters (1,076 square feet), two other families of more than 18 members live with the Amawi family. Some of them left days ago for Syria due to the intensified bombing and poor living conditions.

“We would not have hesitated to travel outside the Gaza Strip, if we had the chance. Perhaps then we could live in peace,” Amawi added.

Regarding the damages suffered by Syrian refugees in Gaza, Amawi said, “Forty houses have been entirely destroyed and 23 others have been partially destroyed across the Gaza Strip since the beginning of the war. Eight refugees were wounded and two were killed.”

Artist Zuhdi al-Adawi and his family, Palestinian refugees from Syria who fled to Gaza, managed to escape death when Israeli tanks stationed at the eastern border of central Gaza targeted their apartment, located in a residential tower in the Nuseirat area.

Adawi, who worked as an artistic director for a Palestinian magazine in Syria, told Al-Monitor, “After 2½ weeks of the Israeli war on the Gaza Strip, tanks targeted my apartment while my family and I were inside. A tank shell destroyed the entire apartment and almost killed us all. Now, we are living with the neighbors until I can afford [to pay] rent, especially since I'm not making any money.”

Adawi indicated that they did not come to the Gaza Strip for its lasting stability, as they are determined to return to Syria when the dust settles there. However, their difficult living conditions in Gaza placing them at the mercy of handouts and war will accelerate their departure.