Chaos and fear reign in Gaza's Shajaiya neighborhood, where civilians hurried back to search for their families during a cease-fire that was cut short. 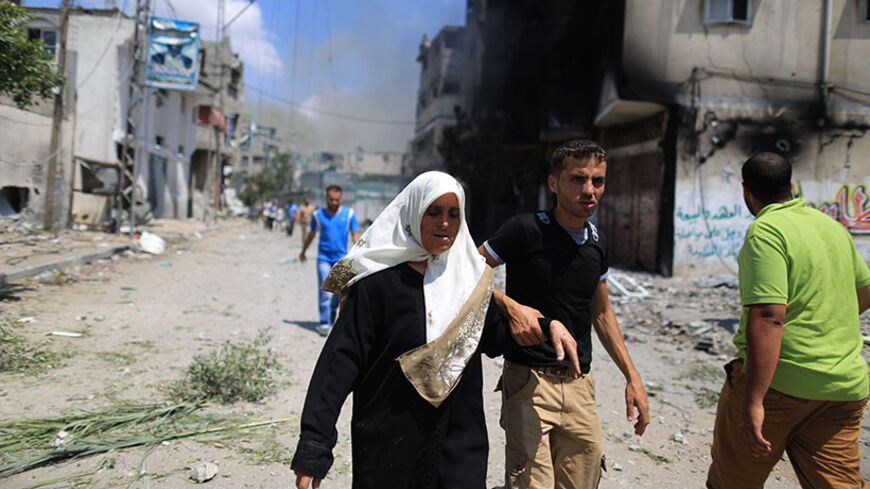 Palestinians flee from from the Shajaiya neighborhood during an Israeli military operation in east Gaza City, July 20, 2014. - Wissam Nassar

GAZA CITY, Gaza Strip — A two-hour humanitarian truce was declared to evacuate the dead and wounded from the Shajaiya neighborhood. It was scheduled from 1:30 to 3:30 p.m. Sunday, July 20, after a long night of heavy shelling by Israeli tanks. Israeli occupation forces have been randomly and continuously shelling the neighborhood, leaving at the time of this writing 400 wounded and 72 dead, according to the Ministry of Health. The search for other civilian casualties is continuing.

Hardly an hour passed before the truce collapsed and we heard the Israeli shelling start up all over again. It seems that the truce means nothing to the Israeli forces, and neither does the bloodshed.

We managed to enter the neighborhood along with reporters and ambulances during the truce. The rescue crews were able to pull some bodies out from under the rubble of houses. The people, who were holding bags filled with their belongings, had been trying to hide, but the shells took their lives anyway.

We entered Beltagy Street in Shajaiya. The houses were empty, most of them shelled or burned. We saw one faraway resistance fighter, walking alone, dressed in black and coming from the front line. The few people still alive were coming out of their homes, while others returned to their houses during the truce to collect their belongings.

A father returning home in search of his missing child told Al-Monitor, “I did not find my child in any of the places where the residents of Shajaiya sought refuge. There are no hospitals here — I believe he remained here.”

We helped him pull up a tree that had been struck down by a shell, to see if perhaps his son was beneath it. We found nothing, except for electrical wires spread everywhere.

Mohammed Rabih, exiting the burned area, told Al-Monitor, “They have been shelling randomly all night long. Some of the neighborhood’s residents managed to leave, while others were stuck under the bombardment.”

We tried to walk further into the neighborhood. Civil defense vehicles were extinguishing a fire while paramedics were searching for injured and dead people. We saw the ambulance near which journalist Khaled Hamad and ambulance worker Fouad Jaber had been killed. The vehicle was also shelled.

We moved a little further and came upon a house with smoke billowing out of it. At that very moment, the truce was suspended, and the thud of Israeli shells echoed nearby. A few seconds later came the sound of another shell. We tried to hide in the corners of a house and then we ran to the car. Al Jazeera reporter Wael Dahdouh remained in place, broadcasting live.

The car took us swiftly out of the neighborhood. On our way, we saw people trying to go back to check their houses. Amar al-Zaeem, who was wearing prayer clothes, told us, “We returned home to collect clothes. We could not enter the neighborhood. We miraculously survived the shelling.”

“He is suffering from shrapnel wounds. I am afraid an artery has ruptured,” the nurse said.

Another nurse took Yaziji away and covered his eye with a bandage. But he soon returned to remain near his cousin. Yaziji was not able to talk to Al-Monitor, but his brother Mohamed al-Yaziji, 24, said, “Mohammed came with his family to find refuge in our house. We were sitting at home when the tank shell hit us and both of them were injured.”

On another bed, Iman al-Atwi lay embracing her niece Nawal, 3, who was crying from her shrapnel wounds and screaming the name "Tala."

Atwi told Al-Monitor, “Tala is Nawal’s sister. I saw her head on the floor after the fighter jets bombed us. We did not leave the house all night, despite the random tank shells. We did not know where to go. However, when the F-16 jets were shelling around the house, the walls started crumbling down while we were sleeping. My family and I fled in the car to our neighbors'. My five nieces, Tala, Assil, Nawal, Kinda and Diana, were all wounded and I knew that Tala was dead.”

Al-Shifa hospital seemed to have turned into a large shelter, as thousands of civilians from the Shajaiya neighborhood preferred to stay in the hospital’s yard or in the surrounding streets instead of returning to likely death.

The Misbah family sat in front of the hospital. The mother, Abla, who was surrounded by her sons and grandsons, said, “We live on the border of the Shajaiya neighborhood near the Karni crossing. We have been receiving threats from the Israeli army for over a week and none of us have left yet. However, the shelling intensified at night and we fled to Shajaiya, where the bombardment was not any better. So we left once again.”

She pointed to her 3-year-old grandson’s feet, which were all black, saying, “He came here barefoot. We walked through the destruction and under the shelling barefoot to save our lives.”

The United Nations Relief and Works Agency for Palestine Refugees (UNRWA) tweeted that 85,000 people were seeking assistance in 67 UNRWA shelters.

In front of the gate of the emergency department, where the Misbah family had made their temporary home, an ambulance was parked. When three paramedics came out of the vehicle, one, Ahmed Sabah, told Al-Monitor. “We just buried a fellow paramedic of ours, Fouad Jaber. He was in an ambulance with a reporter near one of the houses in the Shajaiya neighborhood. The hospital administration has decided to hand over the bodies to their relatives to be buried, instead of keeping them in the hospital, as there is no more room for more bodies,” he said.

Nabil Saker, a volunteer and Sabah’s colleague, added, “Since last night [July 19], we have been trying to reach the wounded, but it is a difficult task. We have been informed by international institutions that Israel has declared the area a closed military zone. The majority of the people we managed to pull out from Shajaiya in the past few hours were either dead or seriously injured, as most of the injuries were in the head and chest.”

According to the Ministry of Health, by the evening of July 20, the death toll had risen to 97 in the Gaza Strip. People gathered in the hospital morgue to learn the fate of their relatives.

There was not enough room in the morgue for all the bodies, which were spread on the ground covered with white sheets. The director of the forensic department, Ihab Khail, told Al-Monitor, “Some of the dead, including women, are unidentified. They were brought here in ambulances during the truce.”

An elderly man, Saeed al-Qunfud, was there searching for a relative, Marwan al-Qunfud. He told Khail, “I don’t remember what he was wearing, but his leg was severed.” Khail answered, “This is a body of a young man whose leg is severed but it is decapitated. How will you recognize him?”