Gaza’s only Greek Orthodox Church canceled its Sunday prayers and opened its doors to hundreds fleeing the Israeli bombardment of the Shajaiya neighborhood. 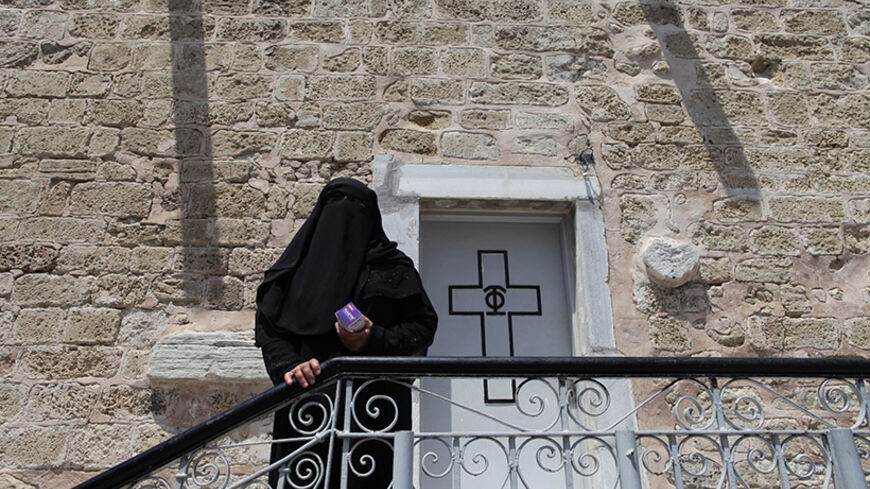 GAZA CITY, Gaza Strip — On July 19, Greek Orthodox Archbishop Alexius was reciting prayers to a small congregation in the only Greek Orthodox Church in the Gaza Strip. He was surrounded by the Byzantine-style icons hung on the walls, the scent of incense filling this 1,600-year-old church.

But he was reciting prayers to a largely empty church, with few attending due to the war. Deacon Rami Ayad, nevertheless, expected the church to be filled with worshipers the next day, a Sunday, and said, “There are not many worshipers usually on Saturday, but we are expecting more, particularly those who live in the area.” After a loud noise interrupted him, he said, “It is a rocket launched by the resistance.”

Abdullah Jahshan, a 29-year-old worshiper, told Al-Monitor, “I am here to attend the prayer service because I live close to the church. My family will attend prayer on Sunday. If I were not living nearby, I would not have come because of the intense shelling everywhere.”

Alexius presented a piece of blackened shrapnel the size of his palm. It had come from an Israeli missile that fell in the courtyard of the church during the shelling nearby. “If I was sitting in the courtyard, where I usually sit and read, this shrapnel would have hit me and I would have died a martyr, as happened with the others during this war,” he said.

On Sunday, things did not go as planned. It was not because of an absence of worshipers, but because of the bloodbath that took place in the Shajaiya neighborhood, where 72 Palestinians died. More than 100,000 have fled their homes. As a result, the church doors were opened to them.

On Monday, Al-Monitor returned to the church, which was teeming with families, children and women. Deacon Ayad smiled and said, “We canceled the prayer. The residents who fled their homes in Shajaiya knocked on our door at 7 a.m.” He said he had asked the archbishop first, who agreed that the doors of the church must be opened and the Sunday prayer canceled.

Ayad said the church had welcomed roughly 400 internally displaced persons from Shajaiya, adding that they have also “opened shops and houses to accommodate another 600 people. The neighbors are donating to everyone and the church is providing the youth in the mosque nearby with money to get food and break the fast at sunset, since they are fasting [for Ramadan].”

In the inner courtyard of the church, dozens of men were lying on the ground. Wael Jundiyah, 39, said, “We ran outside our homes on al-Mansoura Street in Shajaiya, which is adjacent to the Karni crossing. The shelling was heavy and we saw people dead in the streets while we were trying to save our lives yesterday morning.”

Ihab Bahtiti, 30, who carried Ihab, his 2-year-old son, had fled the Shajaiya shelling. “We had endured the shelling throughout the night and we had the feeling that it was about our last moments. At sunrise, my family and I ran away and, thank God, my wife, son, mother and I reached the church. We all feel safe here,” he told Al-Monitor.

In a hall of the church, dozens of women were sitting, chatting and sharing their experience from their areas. Khitam Jundiyah, 31, said, “My 10 children and I were saved miraculously. There were violent clashes between the resistance and the occupation and our homes are located on the front lines.”

Khitam pointed out that most of the women were barefoot, their feet swollen and black. “We were running barefoot, and we could feel the corpses we stepped on. Isra, my daughter, told me. ‘Mum, I stepped on the hand of a child.’”

Shocked and silent, Isra was sitting next to her mother. The expression of her face was vacuous, abnormal for a child her age.

The women who spoke to Al-Monitor all agreed that they felt safe in the church, despite the loud sound of tank shells every few seconds. The fifth century Church of Saint Porphyrius is close to the Shajaiya neighborhood. It is in eastern Gaza City in Harat az-Zaytoun, which is one of the most ancient and popular neighborhoods in the Gaza Strip. It is also adjacent to the ancient and historic Kateb al-Welaya Mosque.

Nazha Succar, 49, has had no news of his family members since he fled Shajaiya. “We know nothing about the rest of our family members. We have seen moments we used to see on TV while watching the news on Syria. The corpses I saw in the street reminded me of the Sabra and Shatila massacre [near Beirut, Lebanon, in 1982].” Nazra was still unaware that 30 members of the Succar family died in the random tank shelling in Shajaiya.

Salama Shalh, 14, and Ahmed Juha, 17, both of whom fled Shajaiya with their families and were staying in the church hall, asked the deacon, Ayad, “Do Christians pray once a year?” He replied “No, they pray every Sunday.” Curiously, they asked him, “What does it [the church] look like inside?” Ayad seemed confused. So, I answered them, “It looks just like a mosque.”