Palestinians reach agreement with Damascus on return of refugees

Amid efforts to reconstruct the Yarmouk refugee camp on the outskirts of Damascus, the PLO is working to facilitate the return of Palestinian refugees to Syria who fled to Gaza and Lebanon. 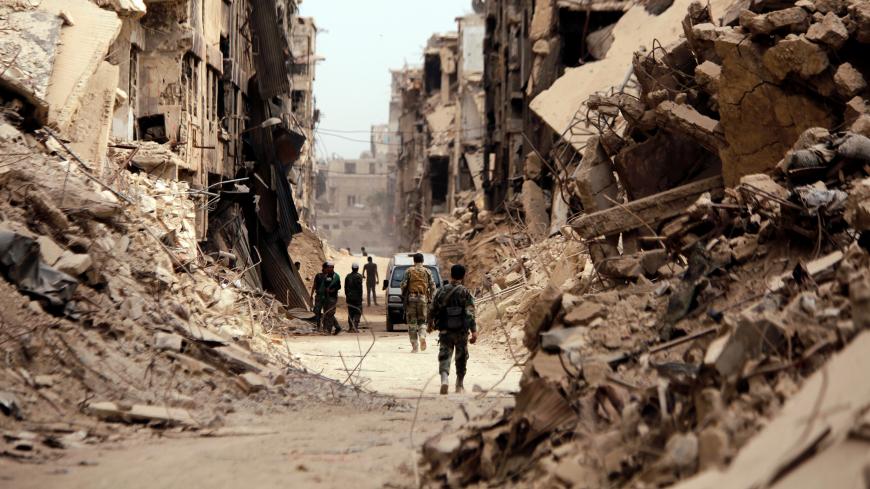 RAMALLAH, West Bank — As Palestinian President Mahmoud Abbas inaugurated the PLO Executive Committee meeting July 28, he described the Palestinian delegation visit to Syria on July 9 as “very successful.” Abbas said that an agreement has been reached with the Syrian authorities over the participation of both the Palestinian Authority and the UN in the reconstruction process for Yarmouk camp on the outskirts of Damascus, in a bid to help refugees return to their homes.

While no date has been set for the reconstruction of the Palestinian camp, the process is set to be part of the comprehensive reconstruction plan in Syria, which the Syrian government started in some liberated areas.

In this context, several Palestinian families who had fled Syria for the Gaza Strip and Lebanon and wish to return to Syria started July 23 registering their names at the headquarters of the PLO in Gaza and the Palestinian Popular Committees in Lebanon. This came in response to the July 20 announcement by the PLO Refugees Affairs Department that those who fled Syria to Lebanon and Gaza and wish to return to Syria were invited to register their names.

While the registration process is limited to Lebanon and Gaza, the department said it will be shortly declaring the registration mechanism for Palestinians who have fled from Syria to other Arab countries such as Jordan and the Gulf states.

Abu Yousef said that the Syrian prime minister stressed that “reconstructing the Yarmouk camp and providing facilities for Palestinian refugees who have fled Syria and wish to return to the country is a top priority for the Syrian government.”

He pointed out that “the Syrian officials confirmed that work is to begin shortly on the reconstruction of what was destroyed by the war in Syria. They also confirmed that due to its geographic importance and symbolism for the Palestinian people, the Yarmouk camp is to be given priority.”

Of note, Syria is home to about 14 Palestinian refugee camps, nine of which are recognized by the United Nations Relief and Works Agency for Palestine Refugees, while five, including the Yarmouk camp, are not.

The Yarmouk camp, established between 1953 and 1954 south of Damascus, was once the largest refugee camp for the Palestinian diaspora. The camp was once home to nearly 200,000 Palestinian refugees before it witnessed a sharp decline in population after the Islamic State took control of 90% of the camp in April 2015. The Syrian army announced the liberation of the camp May 21.

Anwar Abdel Hadi, the director of the PLO political department in Syria, told Al-Monitor that opening the door for the registration of refugees came after they coordinated with Syrian officials the possibility of their return. The Syrian officials welcomed such a step and asked for a list of names of people wishing to return.

“The PLO will ensure the safe return of refugees to Syria because some of them left illegally. Those wishing to return will have their status regularized with the Syrian security services,” he added.

Rami al-Madhoun, the director general of media and public relations at the Refugees Department of the PLO, told Al-Monitor that the decision concerns 50,000 Palestinian refugees who left Syria for Lebanon and 765 who left Syria for the Gaza Strip.

He added that up until July 30, 142 families in the Gaza Strip had registered their names at the PLO. The registration process, he said, is still ongoing, as there are families that were not aware of the process.

Mahmood al-Shawish traveled from Syria’s Kafr Sousse in 2012 to Gaza with his family of five because of the deteriorating security situation in his neighborhood. He owns a house in Syria, where he worked on economic feasibility studies for companies. Shawish has registered his family to return to Syria.

“Palestinian refugees have a lot of reservations about the decision, and they are asking who will be responsible for their security upon their return and where will they be staying, especially considering that the camps are destroyed. Also, they are wondering how the refugees who entered Gaza through tunnels and whom the Egyptian authorities believe are still on Egyptian soil will be treated. They are asking if the PLO will take responsibility for the refugees who do not wish to return,” Shawish told Al-Monitor.

“The Syrian authorities will grant Palestinians the right to return on a case-by-case basis. Also, their decision will be partly based on whether or not these refugees have relatives capable of hosting them. No collective return will be granted in light of the security situation plaguing Syria and the failure to prepare shelters and reconstruct camps,” Abdel Hadi said.

Shawish, however, said he does not trust the Syrian officials’ promises to the Palestinian delegation, as such promises may be reneged upon at any moment. He pointed out that the reservations have been submitted to the PLO, which promised to hold an extensive meeting with the Palestinians wishing to return.

He said that in 2012, 350 families arrived from Syria in Gaza, only 160 of which stayed in Gaza. The rest fled by sea to different countries, as they couldn’t handle the living conditions plaguing Gaza in the absence of any help.

Omar Odeh was living in the suburbs of the Yarmouk refugee camp. He fled from Syria to the Gaza Strip in 2012 with his wife, three married children and their families. Despite his discontent with the announcement, he has registered his name with the PLO.

Odeh told Al-Monitor, “The Syrian crisis is not over yet. So the return of refugees will be difficult, if not impossible.”

“We are still in the first phases of the crisis, and there is an international conflict in Syria, one that will not come easily to an end. So the PLO announcement is a way of shunning responsibility toward refugees in Lebanon, Gaza and other countries,” he added.

“We have been in Gaza for six years now, and the PLO never assumed its responsibilities regarding us. The problem lies in the absence of job opportunities and the unbearable living conditions in Gaza. The PLO has limited capabilities and potential. If we do not return to our camps in Syria, then the PLO should assume its responsibilities,” he further stated.

The Palestinian refugees who left Syria are facing difficult choices. The return to Syria may be fraught with uncertainty, as refugees do not know where they will be settling down, what kind of changes their homes and properties will have gone through and what fate was lying in store for their businesses. However, such an option looks seemingly better than staying in Gaza and Lebanon and dealing with the living circumstances and difficulties there.