Egyptian claims that Mohammed Morsi conspired with Hamas have been dismissed by the Islamist group as part of a "cheap campaign." 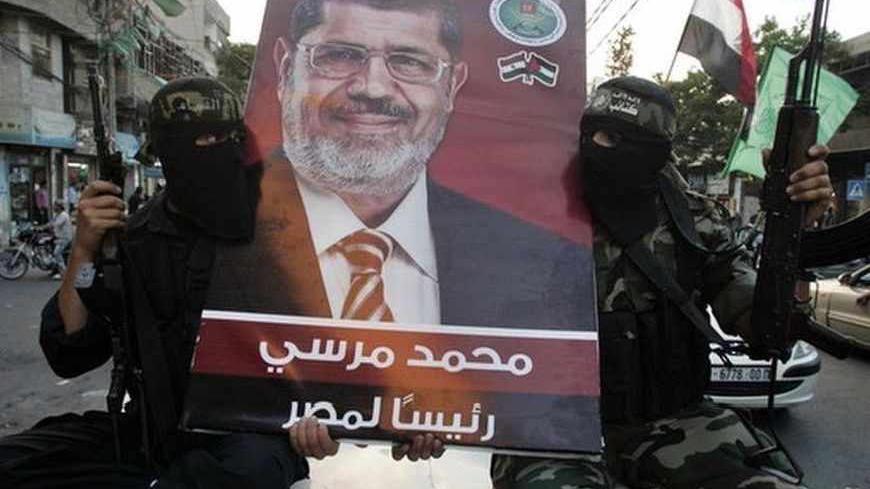 Hamas militants hold a poster depicting Mohammed Morsi of the Muslim Brotherhood as they celebrate in the street in Gaza City after he was declared Egypt's first democratically elected president June 24, 2012. - REUTERS/Mohammed Salem

On Friday, July 26, Egyptian authorities announced the arrest of ousted President Mohammed Morsi over an array of accusations, the most significant of which, according to the investigating judge, is Morsi’s conspiring with Hamas to carry out aggressive acts in the country, including attacks against police stations and soldiers.

It appears Hamas — the Islamist movement that has ruled the Gaza Strip since 2007 — has recently decided to break its silence and respond to accusations leveled against it by Egyptian authorities.

In a written statement July 27, the deputy head of the Palestinian Legislative Council (PLC) in Gaza, Ahmed Bahar, strongly denounced the Egyptian authorities’ accusations that Morsi conspired with Hamas, describing them as preposterous and farcical.

The recent accusations, Bahar added, set a dangerous precedent for the next stage in Egyptian politics as several political and intelligence actors both in and outside Egypt are conducting a vicious conspiracy against the people of Gaza, aimed at bringing down the resistance and the Islamist project in the region.

Bahar also warned against the continued attacks against peaceful protesters and called on Egyptian political parties to “respect the popular and constitutional legitimacy of elected President Morsi" and to "undertake steps to start a national dialogue and keep the country from falling into the grips of devastating violence and civil war.”

Hamas’ new policy on Egypt included going on the offensive against Egypt’s media smear campaign by launching a campaign of its own in Gaza. On Thursday, July 25, Hamas police closed down the media offices of both Al-Arabiya and Ma’an News Agency and ordered their workers to leave after informing them of the attorney general’s order to close the offices, Al-Monitor reported.

Speaking to Al-Monitor, Hamas spokesperson Salah el-Bardawil explained that the Islamist movement has decided to respond to mounting accusations against Hamas and the Palestinians in Gaza after they realized the attacks were only becoming more ferocious and dangerous and it would be better to follow a different strategy on this regard.

The senior Hamas leader slammed the Egyptian authorities and accused them of trying to shove the Palestinians into an entirely Egyptian affair by portraying Hamas as a hostile enemy of the Egyptian people, instead of focusing on the real enemy, which is Israel.

“The Egyptian authorities are trying to incriminate Hamas regarding internal Egyptian matters. This is an unfair political battle, and we are fighting hard to stay out of it,” Bardawil stated, adding, “We will continue to challenge all such preposterous allegations against Hamas and the Palestinian people in Gaza. We have challenged any party before to provide evidence demonstrating Hamas’ involvement in Egyptian affairs. No one has. And no one ever will, because we are not a terrorist movement terrorizing the Egyptian people. We are a resistance and liberation movement which fights only in the occupied Palestinian territories,” Bardawil said.

Muslim Brotherhood spokesperson Gehad El-Haddad dismissed the accusations against Morsi as “ridiculous,” saying they “are not taken seriously at all” and that they will make “more people [realize] what this regime really represents — a return of the old state of Mubarak, with brute force.”

Similarly, Hamas Deputy Minister of Foreign Affairs Ghazi Hamad told Al-Monitor that the recent charges leveled by the authorities against Morsi legitimize the Egyptian media’s slanderous campaign aimed at demonizing the Palestinians and representing them as an enemy of the Egyptian people.

“The Egyptian media’s systematic and cheap campaign,” Hamad said, “only serves to demonize Gaza and the Palestinian people in general ... We have consistently emphasized that we have absolutely no presence inside Egypt, but there are parties which are trying hard to incite hatred against Hamas and the Palestinians by pushing them into an entirely Egyptian affair.”

Hamad pointed out that Hamas has maintained good relations with the authorities and political parties inside Egypt and has been able to secure their confidence around diplomatic and security issues. Therefore, the Islamist movement is now in contact with different parties in Egypt, drawing their attention to the fierce campaign waged against the Palestinians in Gaza.

In the same context, Gaza-based commentator Naji El-Batta told Al-Monitor that Hamas had to break silence on the Egyptian accusations due to their potentially grave political implications saying they could give grounds for a new Israeli offensive against Gaza.

“The authorities in Egypt are steering attention away from Israel and its belligerent policies in the region and trying to portray Palestinians as Egypt’s real enemies. The military coup in Egypt and its leaders, therefore, are only serving Israel’s interests by focusing on Hamas and distorting its image in the eyes of the Egyptian people as a terrorist organization.”

Asked whether Hamas is likely to appeal to past allies in the region such as Iran, Hamad told Al-Monitor that the Islamist movement has held different meetings with Iranian officials, as first reported by Al-Monitor, over the past few weeks in order to settle their differences over the Syrian crisis, which led to the collapse of a once very close alliance. He explained, “We and the Iranians agree that each party has to make an effort to make sense of the other party’s stance on Syria. The one cause that unites both of us is the Palestinian cause, and both Hamas and Iran have common interests which they should keep by staying closely allied.”