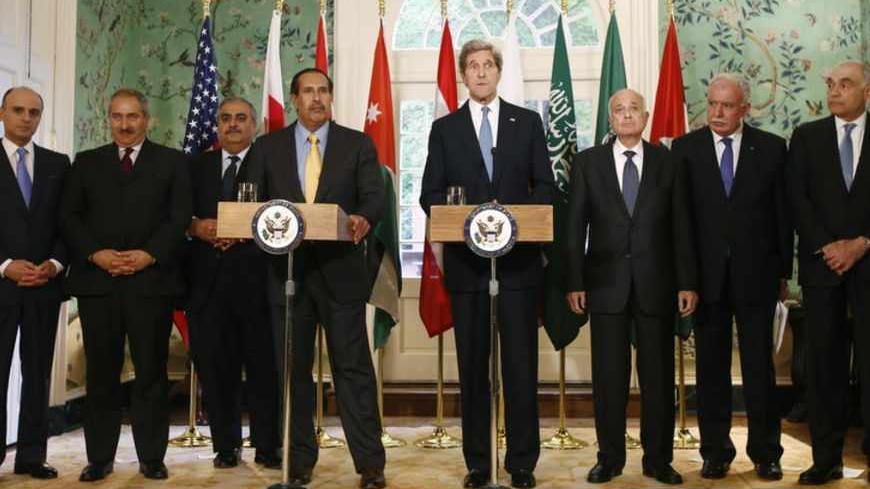 On April 29, top Arab League officials, following their meeting with US Secretary of State John Kerry in Washington, announced their support of the principle of mutually agreed land swaps with Israel, rather than full Israeli withdrawal to the pre-1967 borders, or Green Line. As per the 2002 Arab Peace Initiative, the delegation, led by Qatari Prime Minister Hamad bin Jassim al-Thani, reiterated its call for full normalization of ties with Israel in return for a withdrawal from lands it occupied during the 1967 War.

The league's action has caused a furor among Palestinian officials across the political spectrum, as Dalia Hatuqa reported in Al-Monitor on May 1, from the Popular Front for the Liberation of Palestine (PFLP) to Islamic Jihad and Hamas. At the same time, Israel praised the move as an “important concession” on the part of Arab the states.

On May 2, the Ma’an News Agency reported Hamas politburo chief Khaled Meshaal's rejection of the Arab League endorsement of land swaps and his asessment that “any such concession would harm the Palestinian cause.” According to the agency, Meshaal in addition saw the situation as “a bid to find economic peace between Arab states and Israel by integrating it into the region.”

Speaking to Al-Monitor, Ghazi Hamad, Hamas deputy foreign minister, also denounced the Arab League decision and the entire approach of dealing with the Palestinian question within the “framework of negotiations.” Hamad argued that the Qatari-led initiative was an attempt by the United States to bring the Palestinian Authority (PA) back to the negotiating table by pressuring it through the Arab League.

“We should see things as they really are to avoid falling into another US-set trap,” Hamad asserted. “After they failed to pressure the Palestinian Authority into resuming the so-called peace negotiations with the Israelis, they have approached us through the Arab League gate trying to convince us that this is going to be the new magic solution to the stalled negotiations.”

According to Hamad, this latest development will by no means usher in new hope for peace in the region. Even if the Palestinians agreed to the concession, he contended, nothing would change on the ground because the crux of the matter is that Israel is not serious about wanting peace with the Palestinians.

“Israel is systematically obliterating any possibility for peace or a political solution with the Palestinians. How many peace deals and initiatives have we had with the Israelis?” Hamad asked. “The problem is not the Arab League concession per se and its endorsement of lands swaps, but rather with the principle that we can actually make peace with Israel through negotiations and further concessions.”

During a Friday sermon, Mahmoud al-Zahar, another senior Hamas official, lambasted the initiative as “an attempt to alter history.” He also invoked the Palestinians' inalienable rights to their land, homes and holy sites that cannot be bargained or waived by Arab states’ foreign ministers.

In a phone interview with Al-Monitor, Salah Bardawil, another prominent Hamas leader in Gaza, said that Israel is seeking further concessions by the Palestinians, but regardless of whatever concessions are made, the Israelis are not willing to give anything in return for peace.

“We are outraged by this new addition regarding land swaps as part of the already flawed Arab Peace Initiative,” Bardawil stated. Referring to the Arab League members, he added, “They should have called on Washington to pressure Israel to end all settlement activity and dismantle all settlements in the occupied West Bank rather than accept them as a matter of fact and agree on so-called mutually agreed land swaps. This policy is utterly unacceptable and unfair to the Palestinians.”

Likewise, figures from the Islamic Jihad movement strongly denounced the Arab League's acceptance of this principle. Khaled al-Batsh, an Islamic Jihad leader, called it a “new Balfour made by Arab foreign ministers who do not own the land of what has been left of Palestine.”

“We are shocked that not only are they willing to concede the idea of recognizing the legitimacy of the occupation, but also offer full normalization of diplomatic and economic ties with Israel,” Batsh said in a telephone interview with Al-Monitor.

On the left of the political spectrum, Jamil Mezher, senior member of the PFLP Central Committee, spoke extensively with Al-Monitor on how detrimental the Arab League's move will be to the Palestinian cause, calling it a “dangerous compromise of Palestinian rights made by the Qatari emir on behalf of them.”

“This willingness on the part of the Arab states is unacceptable and should be condemned in the strongest terms. It is meant to give legitimacy to the Israeli illegal occupation of the West Bank and [East] Jerusalem. We should mobilize the Palestinian masses in rejection of this dangerous compromise of Palestinians rights,” he said.

Mezher also slammed Qatar as “acting as a subcontractor of the US administration in the region,” which proves that there is a “serious and suspicious effort to reshape the region in what could best serve American and Israeli interests.” He continued, “The Palestinians have not assigned [Hamad] bin Jassim to make compromises on their behalf. We are working very hard with the Palestinian leadership to reject all such doubtful moves. … We are outraged by the Qatari role. They should have called on the US to commit itself to the international legitimacy represented in international law and UN resolutions.”

Ghazi Hamad asserted that the “weak” Arab stance is only a result of the Palestinians’ “undefined” national project. He contended that the Palestinians need to “end the political split, redefine their national project and agree on all possible strategies they can use, including the political solution, armed and popular struggle, diplomatic and economic boycotts, and international legal avenues.”

“Once we have been able to achieve this and get our act together as Palestinians,” Hamad said, “the Arab stance on Israel will be stronger and unified.”