The decision by the Arab League’s Washington delegation to offer a land swap to Israel has raised the ire of Palestinians, who say the move was unauthorized, reports Dalia Hatuqa. 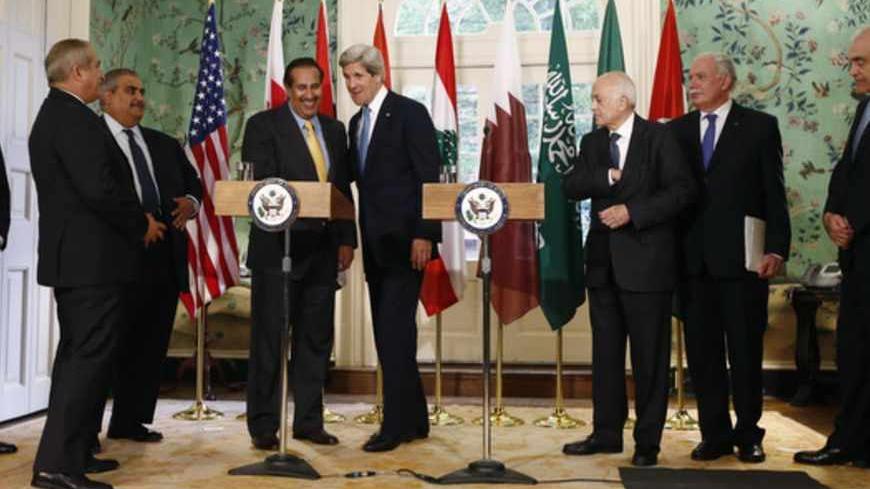 Earlier this week, a media storm erupted in Israel and the US over an Arab League announcement that the Palestinians have agreed to the possibility of land swaps with Israel as opposed to a rigid conformation to the "Green Line” or pre-1967 borders.

While Israeli officials such as Tzipi Livni, chief negotiator with the Palestinians, called the step “very positive,” the news was met with anger in Palestinian circles. In a statement released to the media, Hamas expressed “deep concern about the … principle of land swaps with the occupation.”

“We were hoping that the Arab ministerial delegation would ask Washington to pressure [Israel] into stopping settlement activity on our occupied land … Our experience with [Israel] has taught us that that it merely seeks more concessions … that it doesn’t want peace, but seeks to impose a fait accompli on our people.”

“This is not something new,” said chief Palestinian negotiator Sa’eb Erekat. “The Arab delegation presented the official Palestinian position: Upon Israel’s unequivocal acceptance of the two-state solution on the 1967 borders, the State of Palestine as a sovereign country might consider minor agreed border modifications equal in size and quality, in the same geographic area, that do not harm Palestinian interests.”

Palestinian officials said the Arab League delegation, which recently met with US Secretary of State John Kerry in Washington, merely ratified the Arab Peace Initiative. The delegation included Palestinian Foreign Minister Riyad Al Malki, as well as counterparts from Jordan, Bahrain, Egypt and Qatar in addition to top officials and ministers from Saudi Arabia, the Arab League and Lebanon.

Newspapers ranging from Ha’aretz to The Washington Post led with analysis that this step marks a softening in the 2002 peace plan put forth by the Saudis and endorsed by the Arabs. Erekat said the plan “provides a comprehensive regional solution based on Israeli implementation of international law in exchange for full normalization with the rest of the region.”

Some Palestinians like Mazin Qumsiyeh, a Bethlehem-based professor and political commentator, however, called the move a campaign aimed at “keeping the charade that there’s hope for a peace process.”

“I don’t hold too much hope for it,” Qumsiyeh told Al Monitor. “It’s mostly a PR stunt. All they had to do was send another letter and say it’s still on the table. There’s no point in going [to Washington] as a group of foreign ministers.”

Qatari Prime Minister Sheikh Hamad bin Jassim al-Thani made the announcement, speaking on behalf the visiting delegation. Like its original blueprint, the ratified plan offers Israel fully normalized relations with all 22 Arab League members in exchange for a Palestinian state and a “just solution” for Palestinian refugees.

The slightly improved plan takes into account US President Barack Obama’s proposal for a “comparable and mutual agreed minor swap of the land,” according to al-Thani. Last month, Obama had hinted to the possibility of using the Arab Peace Initiative “as a framework for a regional peace accord,” reported the Back Channel, quoting McClatchy News.

Kerry has been actively exercising shuttle diplomacy since Obama visited Israel, the West Bank and Jordan in March. Kerry, who has already been in the region three times, has made it clear he intends to work on reviving the moribund peace talks between Israelis and Palestinians. Direct talks between the two parties have been on hold since 2010.

The Israelis had long rejected the decade-old Saudi plan, which was put forward in Beirut. Among their objections were listed no return to 1967 borders, no “division” or sharing of Jerusalem and no return by Palestinian refugees to their ancestral homes. It is not yet clear how this modified plan will overcome these hurdles.

Details on upcoming steps were not given in Washington, but following the meeting held at Blair House, Obama’s official guest house, Kerry spoke of “the Arab League’s very important role ... in bringing about a peace in the Middle East, and specifically by reaffirming the Arab Peace Initiative here ... with a view to ending the conflict.”

Qumsiyeh said the Arab League as a whole has become devoid of any meaningful strategy.

“The Arab league is now more uniformly in line with Israeli and American policies,” he told Al Monitor. “It remains to be seen whether [their latest move] will make an incremental difference in people’s perception, but judging by the big yawn I see among Palestinians around me, I don’t think it will make a big difference, not even in the PR realm.”

The announcement, meanwhile, raised the ire of other Palestinian factions in the territories. An Islamic Jihad leader went as far as to call the move “a re-commitment to a new Arab Balfour Declaration.”

“Why is the Arab League and the delegation in a hurry to put forth new ideas and solutions instead of taking advantage of the popular uprising in the Arab world?” said Khaled Al-Batsh, a senior leader of the movement.

The Popular Front for the Liberation of Palestine (PFLP) also slammed the move.

“No one gave this delegation the authority to give up Palestinian land … this delegation should have extracted an American approval to carry out international resolutions, including a rejection of ongoing settlement,” a PFLP statement said.

Ehab Al-Jariri, a popular radio host and journalist, questioned the move, saying the delegation was not authorized by Palestinians to make any land exchanges.

“The Arab League delegation is acting like this is their land to forfeit,” he wrote on his Facebook page. “This land is not for sale or swapping.”

Dalia Hatuqa is a contributing writer for Al-Monitor's Palestine Pulse. A print and broadcast journalist specializing in the Middle East, she is based in the West Bank city of Ramallah and writes for several publications about politics, the economy, culture, art and design. She regularly contributes to Al Jazeera's English website, The National (UAE) and Brownbook and Masquerade magazines. On Twitter: @daliahatuqa