Despite the fiery reaction from some Palestinian circles, the concept of land swaps with Israel has long been accepted by the Palestinian Authority. 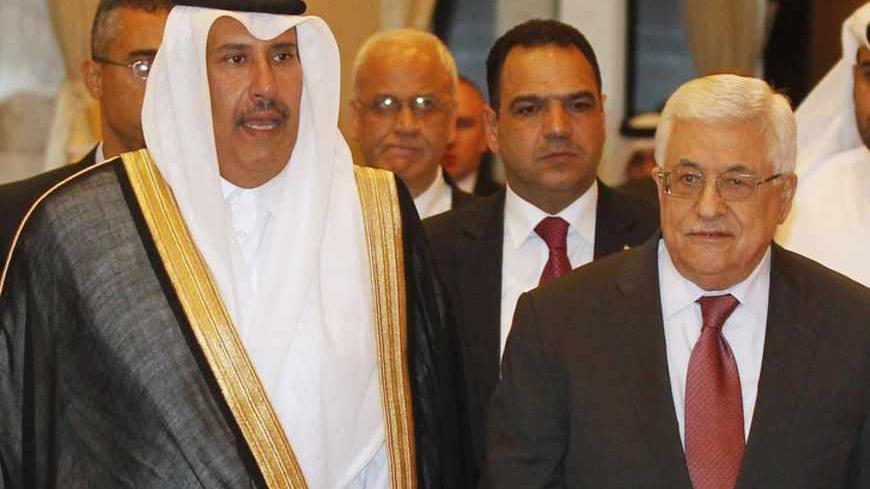 The statement made by the Qatari prime and foreign minister in Washington in favor of adding a clause to the Arab Peace Initiative allowing for "land swaps"  caught many off guard and drew a largely negative reaction in Palestinian and Arab circles.

On the surface, the statement by Hamad bin Jassim bin Jabr Al Thani of Qatar in the presence of US Secretary of State John Kerry, the Arab League delegation (including the Palestinian Foreign Minister Riyad al-Malki) didn’t seem like a problem. Hamad said: “The Arab League delegation affirmed that agreement should be based on the two-state solution on the basis of the 4th of June 1967 line, with the possible of comparable and mutual agreed minor swap of the land.”

Since the 2000 Camp David talks, the Palestinian leadership has accepted that while the two-state solution should be based on the pre-June 5, 1967, borders, the concept of land swaps was possible.

The idea behind the land swap suggestion was meant to incorporate for Israel the many Jewish settlements that straddle or are close (on the Palestinian side) of the Green Line into the state of Israel. In return, the thinking has been that Israel could possibly free lands to allow for a West Bank-Gaza corridor as well as to allow for expansion of the Gaza Strip.

For Palestinians the idea of land swaps is not a pre-requisite to peace talks, but an integral part of the negotiations. Since the former borders have been obliterated for more than four decades and, as a gesture towards the Israelis, the concept was accepted in the heat of peace talks so long as three conditions were respected: land swaps are minor, equal in size and comparable in importance.

But the issue of the land swaps discussed in the private settings of Camp David or other negotiations was never meant to be part of the give and take process, especially for an Arab League (and later an Organization of Islamic Cooperation) peace initiative that was focused on the major principle of exchanging withdrawal for normalization with 56 Arab and Islamic countries.

Palestinians and Arabs had already been upset that the Arab League initiative had in fact included a major concession to the Israelis by allowing a sort of veto power on the right of return. In a paragraph dealing with the issue, the Arab initiative calls for “an agreed-upon” solution to the Palestinian refugee issue based on UN resolution 191. By adding the term “agreed-upon,” Israel would no longer be obliged to conform to the original resolution, which required the right of Palestinians to return and compensation. Instead, Israel will be able to keep rejecting any Palestinian offer until they reach the deal they want. Obviously this negative power is mutual, but removing it from an obligation to an agreement has extremely weakened this clause.

The statement in Washington was quickly picked up by Hamas and other radical Palestinian forces as a sign of retreat and as a gift to the intransigent Israelis who have yet to agree to the minor obligation of freezing settlement activity. The argument also went that Israel has yet to even respond to the 2002 initiative passed at the Beirut Arab League Summit, so why give them an additional bonus?

For the average follower of Arab-Israeli negotiations, this does seem like a free bonus to Israelis. But it seems that there are some serious behind-the-scenes discussions by the Americans which seem to have required this minor adjustment to the Arab initiative. This adjustment doesn’t contradict the official Palestinian position, which doesn’t oppose land swaps so long as they are minor, equal in size and comparable in importance.

To reiterate that, Palestinian President Mahmoud Abbas made sure that his own party, Fatah, was still on board on the land swap idea. In a meeting held in Ramallah this week, the Fatah central committee publicly approved that land swaps are indeed acceptable to them. Now it remains to be seen whether Kerry and US diplomats will be able to kick-start the long delayed negotiations for a two-state solution on the basis on the 1967 borders.