Who will control Gaza forces?

An Egyptian proposal for a Fatah-Hamas joint security council in the Gaza Strip could pave the way for Palestinian reconciliation. 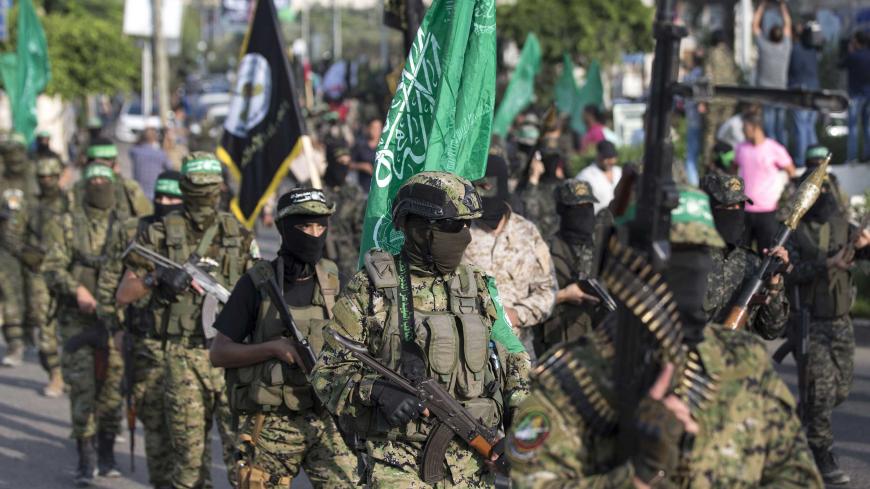 Meeting in the Gaza Strip, Fatah and Hamas engaged in reconciliation talks this week, announcing that the movements have agreed on national unity. But from there to a detailed and feasible agreement for a unity government, there is still a long way to go. At the heart of the dispute preventing the reconciliation is the question of who will control the security forces in Gaza. According to Israeli assessments, the Hamas military consists of some 20,000 armed members who joined Izz ad-Din al-Qassam Brigades since Hamas staged its coup in Gaza in 2007.

In an interview that Palestinian President Mahmoud Abbas granted to Egyptian television on Oct. 3, the day of the celebratory meeting in Gaza, he said that he would not agree to accept the "Hezbollah model" in the Gaza Strip. In other words, he rejects the notion of having a civilian government headed by the Palestinian Authority (PA) and at the same time for a political movement to keep its own armed force. "We, in the West Bank, operate according to a single law and a single authority. I order to arrest anyone who holds weapons that is not under the auspices of the law, even if they are Fatah members, and that is what is meant to be," he explained.

Abbas speaks from experience. During the Hamas coup, PA forces were forced out of Gaza at gunpoint. He is, therefore, unwilling to compromise on this. But Hamas is not willing to compromise either. The group considers the armed forces it established to be a "weapon of resistance," with senior Hamas official Mousa Abu Marzouk saying, "We are talking about weapons intended to defend the Palestinian people. As long as the Palestinian people continue to live under occupation, these weapons will continue to be prepared and ready for any scenario."

As Al-Monitor previously reported, the dispute between Fatah and Hamas is not limited to security control over the Gaza Strip or whether all Palestinian military forces should be forced to submit to Abbas as commander of the security forces in the PA. It also involves how the objectives of the security forces are determined. The PA regards its security forces as an enforcement agency, charged with maintaining order and security in the Palestinian territories and protecting its officials and institutions. In contrast, Hamas considers the military force it created to be a weapon of deterrence in its struggle with Israel.

Given that the differences between Hamas and Fatah were made very clear just before the government meeting in Gaza convened and the reconciliation talks commenced, it seems as if there is nothing more to talk about. The differences are too vast to overcome. Nevertheless, the meeting took place. Everybody smiled at everyone else. Photos described as "historic," disseminated by the Palestinian media, showed the head of Palestinian Intelligence Services Majid Faraj smiling as he hugged the head of Hamas in Gaza, Yahya Sinwar. Next week, Cairo will host working meetings by committees responsible for a number of different issues.

Abbas has clearly declared that he is not willing to forgo the principle of "a single law and a single authority." Nevertheless, neither he, nor anyone else on either side, has given up on the chances of reaching internal Palestinian reconciliation.

Al-Monitor has learned from sources in Gaza close to former Fatah senior Mohammed Dahlan's people that the reason for the cautious optimism exhibited by both sides is the fact that Egypt has proposed a compromise. If accepted, it should resolve the dispute, at least in the short term, until Hamas joins the PLO's official institutions and commits itself to accepting the overriding principles shared by all the other Palestinian factions.

The Egyptian proposal, which was apparently initiated by Khaled Fawzy, the director of the Egyptian General Intelligence Directorate, revolves around the creation of a joint security council for the Gaza Strip. Its members would consist of the heads of security in the PA and their counterparts in Hamas, with all security decisions made jointly by them. Fatah and Hamas would have an equal number of members on the council, and Egypt would also be represented on it. According to one Palestinian source in Gaza, senior Hamas officials have accepted the Egyptian proposal. It has also been presented to Abbas, but he has yet to respond.

Discussions about the Egyptian proposal and an examination of whom it benefits lead to the conclusion that Hamas considers the proposal reasonable. They assess that even if the joint security council is created, recruits who joined the Hamas army before reconciliation will show greater loyalty to Hamas.

It is in Egypt's best interests that its representatives will be members of the proposed security council and oversee it — if it is, in fact, created. True, the Egyptian representatives will only have the status of observers, mediators and intermediaries, without any decision-making authority, but that is enough for Egyptian intelligence to ensure that their country's security interests are not marginalized. This will allow Egypt a toehold in Palestinian territory, when it is clear to anyone in the know that Egypt will be the deciding voice on major issues in which the dispute between Hamas and Fatah seems irresoluble.

Egypt has considerable interest in reconciliation between Fatah and Hamas, since this ensures further security coordination with Gaza and the prevention of smuggling — of weapons, mainly — into Sinai Peninsula. Then there is the fact that Egypt is concerned that the humanitarian situation in Gaza might deteriorate further, placing Egypt at risk. What remains to be seen now is whether the Egyptian proposal will be accepted by all the parties.

One big question is what will happen to Izz ad-Din al-Qassam Brigades, which currently maintain their independence as a military force. Will the head of the movement's military wing, Mohammed al-Deif, be willing to relinquish his status and role and dismantle al-Qassam Brigades? These issues have not yet been discussed, but they will certainly raise many questions when the Joint Military Committee convenes in Cairo to discuss the Egyptian compromise proposal.

Another open question is whether Abbas is willing to relinquish his role as supreme commander of the Palestinian Security Forces, a position reserved for the head of the PA. The very existence of a joint security council with representatives of a foreign state, no matter how friendly, calls his ability to make decisions into question.

Al-Monitor has learned that Egypt has already informed Abbas that Hamas — more specifically, its al-Qassam Brigades — will not give up its arms as long as the occupation continues.

Even if a compromise is eventually found to enable the creation of the joint security council, such as Egyptian guarantees to Abbas that Hamas weapons will not be turned against him, the question of the armed forces' ultimate purpose remains. Will it focus on becoming a national security force, or will it be destined to serve as the "weapon of the resistance"? The response to this question will determine the future of Palestinian reconciliation.