Fate of Gazans is in Hamas' hands

The Hamas movement is at a decisive crossroads: either it relinquishes its military control and concentrates on rehabilitating the Gaza Strip or it risks destroying all of Gaza's residents. 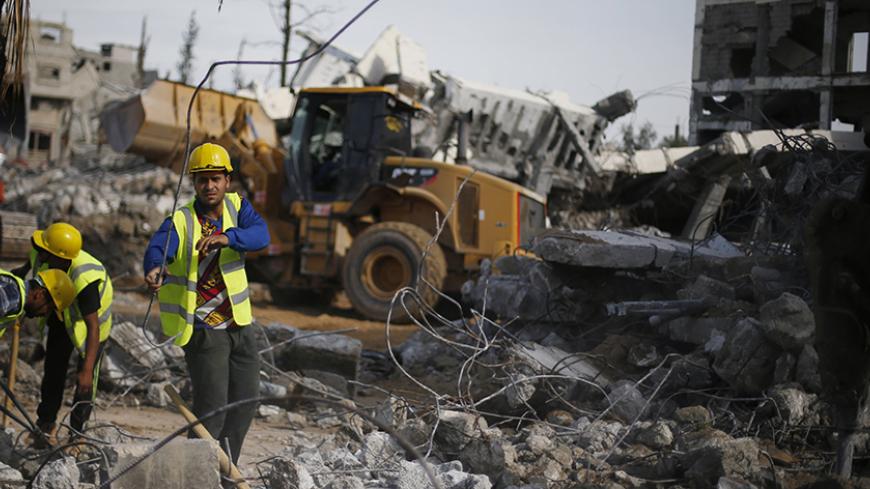 Palestinian laborers work to clear the rubble of a school that witnesses said was destroyed by Israeli shelling during the latest conflict between Israel and Hamas, in Gaza City, Dec. 3, 2014. - REUTERS/Suhaib Salem

Over the last weekend, Egypt's Emergency State Security Court blacklisted Hamas' armed wing, the Izz ad-Din al-Qassam Brigades, declaring it a terrorist organization. The court's ruling was made a day after the terrorist onslaught in the Sinai Peninsula that claimed the lives of 27 Egyptian soldiers and left dozens wounded. There is no clear-cut evidence of collaboration between the Islamic State (IS), which assumed responsibility for the attacks, and cells of Izz ad-Din al-Qassam Brigades in the recent terrorist assault. But as far as Egypt is concerned, there is no need, or any reason, to ascertain such coordination between the two groups to declare Hamas' armed wing an organization that supports and carries out terrorist attacks.

Izz ad-Din al-Qassam Brigades have been active in Sinai for years, smuggling weapons and conspiring with each and every jihadist faction around, mostly under cover, but openly at times, during the era of former President Hosni Mubarak, while his regime occasionally turned a blind eye.

They kept at it both before and after the Muslim Brotherhood's ouster and Abdel Fattah al-Sisi's rise to power as president of Egypt. But rather than acknowledging the new situation created and realizing that they are leading the 1.8 million Palestinians in Gaza along a hopeless blind alley, Hamas leaders continue to act as if it were a crisis likely to be resolved shortly. This time around, however, the challenge facing Hamas has to do not only with Israel, and Hamas cannot hope to tackle or overcome it in another round of armed conflict and a subsequent cease-fire agreement. Israel will not go away, while Sisi and the new Egyptian regime are there to stay for quite some time.

The reaction by senior Hamas member Ismail Haniyeh aptly illustrates the ostrich policy Hamas is following, as it buries its head in the sand and fails to understand the Egyptian court’s ruling and its immediate and future implications for the movement in general, and for the Gaza Strip residents in particular. “Izz ad-Din al-Qassam Brigades are a source of pride, honor and bravery. You Egyptians have lost much of what’s left of your integrity and sense of justice, which has done away with itself,” Haniyeh lashed out in anger against Egypt — formerly embraced by him as “our great friend.”

One may wonder what Haniyeh meant when talking of integrity and sense of justice, and precisely what audience he was addressing. Was he talking to the Egyptians, who are going through a fierce extremist Islamic war that dealt a massive and painful blow to the country’s security forces? Or was he appealing to the people of Gaza, who are still licking their wounds from the last war with Israel?

When Hamas ascended to power following the 2006 parliamentary elections, its leaders pledged the residents of Gaza “change and reform.” They may have truly believed then that they could bring about a change in Gaza — not merely throw promises around on the liberation of lands. On Jan. 25, the day Hamas won the parliamentary elections of 2006, I saw the people of Gaza, genuinely confident that a change for the better in their lives and in their situation was around the corner, and hoping that Hamas would take a softer line and find a middle ground between its built-in anti-Israeli jihadist ideology and a sensible recognition of reality.

Most of the Gazans, I was told by them over and over again, did not believe in the slogans of violence waved aloft over the years by the spokesmen of Izz ad-Din al-Qassam Brigades, threatening that "the earth will tremble under the feet of the Zionists,” that “Zionism will soon vanish” and other baseless slogans in that vein.

The Gaza residents, many of whom were working in Israel, were well aware of its military and economic might. They thus did not believe the empty promises of the Hamas leaders to the Palestinians. They hoped that one day they would be able to live in dignity and freedom. Alas, as Hamas consolidated its hold and absolute control over Gaza, their hopes have proven false. The armed wing of Hamas led the wars against Israel without taking into account the heavy price the Gaza residents were liable to pay, in terms of their lives, property and actual existence — and this, just to assure its own people that they were capable of hurting the “Zionist enemy” and causing it heavy losses.

Immediately after the cease-fire came into effect at the end of Operation Protective Edge, it transpired that more than 2,000 Gazans had been killed. Nevertheless, Hamas leaders were walking around intoxicated with their apparent victory, bragging, both in and out of the Gaza Strip, that they managed to hold out, more so than any other Arab army that had ever launched military campaigns against Israel. But what has Gaza earned from the “steadfast resistance of Izz al-Din al-Qassam Brigades”? As of today, the situation of the Gaza residents is far worse than it was before the operation. In fact, their situation has never been so hopeless. Gaza is surrounded and blocked on all sides, and for two months now the Palestinian Authority (PA) and Hamas employees there have not received their wages. Yet, so far, there is no solution in the offing.

After Israel assassinated the Hamas leaders, in spring 2004, the movement made a dramatic decision to become a political movement, to cease terrorist attacks against Israel and to find its way into the Palestinian political-governmental institutions established in the PA on the basis of the Oslo Accord (although they stopped short of explicitly referring to the Oslo Accord). It was not an easy decision. The movement had to choose to cease the attacks against Israel and take a new path, or risk the extinction of the movement. These days, Hamas is at a far more critical crossroads: It is no longer just the course the movement will follow and its future that are under discussion, but rather the very lives of all residents of the Gaza Strip.

If Hamas leaders fail to make some dramatic decisions, if they don’t take control over the movement's armed wing and acknowledge the limits of its power, and if they hold on to the destructive regime they have set up in the Gaza Strip, Hamas will probably collapse. Not many would mourn the collapse of the movement that brought disaster on the Gaza residents. But one also needs to take into account that Hamas will probably not just fall apart and vanish into thin air, without bringing an even greater disaster to the people of Gaza.

Thus, instead of organizing demonstrations in the Gaza Strip against Egypt, or preparing for another round of hostilities against Israel, the leaders of Gaza must take stock and make a crucial decision, the way they were once smart enough to make. They should now accept the Quartet's conditions (the United States, European Union , United Nations and Russia) — put forward as a prerequisite for international recognition of the movement, upon the election of Hamas as the ruling power in Gaza — or else relinquish control of the Gaza Strip and allow Palestinian President Mahmoud Abbas’ associates to enter Gaza and begin to restore and manage it.

There is no middle way and no magic solution. The path followed by Hamas has failed — and this, since the armed wing of the movement has forced its will on its leaders and led them by their noses. Nowadays, they and the people of Gaza are both paying the price of hubris. The sooner Haniyeh, Hamas' political bureau chief Khaled Meshaal and Hamas senior Mousa Abu Marzouk realize the serious situation their movement is in, the better it would be for the Gaza Strip residents.