The group's leaders, however, anticipate a severe confrontation with Israel. 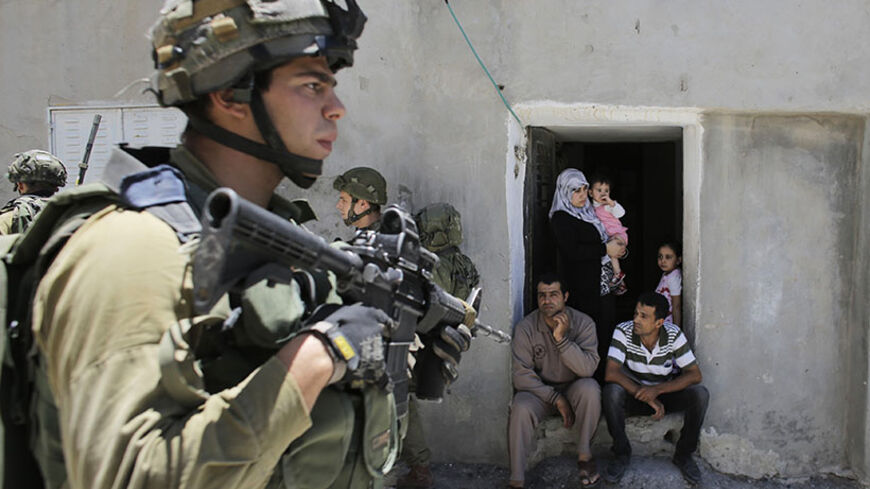 Israelis and Palestinians remain in a state of shock following the kidnapping of three Israeli teenagers near Hebron in the south of the West Bank on the evening of June 12. Three organizations claimed responsibility for the operation: Ahrar al-Khalil, the Islamic State of Iraq and al-Sham (ISIS) and Al-Aqsa Martyrs Brigades. But Palestinians do not take these claims seriously, according to two security sources in the West Bank and Gaza Strip who spoke to Al-Monitor, as these organizations lack the infrastructure needed to carry out such a complex operation.

Al-Monitor previously reported on Palestinian plans to kidnap Israelis, so Hamas could pull off a prisoner swap with Israel. Such was the case with the Gilad Shalit deal in 2011, which whet the movement’s appetite for a similar new deal to secure the release of the remaining prisoners from Israeli jails. This also comes in light of the hunger strike announced by those prisoners more than 50 days ago, and the Israeli intelligence services’ warning of a kidnapping operation to free those prisoners, merely one month before that prediction became reality.

The novelty with this kidnapping is that three Israelis were kidnapped at once, under the glare of the Israeli army, prompting Defense Minister Moshe Ya’alon to say that “the operation was not picked up by military intelligence,” in an indication of the failure of security measures.

On the morning of June 15, Israeli Prime Minister Benjamin Netanyahu was quick to blame Hamas, and vowed to take harsh retaliatory measures, which began with the arrest of hundreds of Hamas figures in the West Bank.

Meanwhile, the spokesman for Palestinian security agencies in the West Bank, Adnan Damiry, accused Hamas of “seeking to inflame the situation and drag everyone toward violence and chaos, to rebuild its military wings.”

But Abu Obeida, the military spokesman for the Izz ad-Din al-Qassam Brigades, contented himself with stating, “The operation proved to the Israeli occupiers that none of them shall live in peace as long as there remained resistance fighters in the West Bank.”

For his part, Hamas spokesman Sami Abu Zuhri denied the accusations and described them as “irresponsible and the fabrications of intelligence agencies. The Israeli arrests in the West Bank are aimed at breaking the movement’s resolve,” adding that the escalation reflected Israeli confusion.

A high-ranking Hamas source in the Gaza Strip repeated that denial to Al-Monitor, but left open the possibility of Hamas’ military wing operating without the full knowledge of its political wing. “Hamas truly does not know who stands behind the operation, because there is a separation of duties between the military and political branches of the movement. The politicians instruct the military to find a solution to the prisoner dossier, and the men on the ground have the freedom to choose the time, place and operational details.”

The source recalled what occurred when Shalit was kidnapped in 2006, and how Hamas’ political leadership learned of the operation through the media. “At the same time, if the coming days confirm that Hamas was responsible for the operation, then that would be a godsend the movement desperately needed. This follows the many claims that its popularity had waned among Palestinians of the Gaza Strip, as a result of its years at the reins of power, and the purported success of the Israeli army in dismantling Hamas’ cells in the West Bank.”

Hamas has previously cited military operations as a means to restore its popularity on the Palestinian street, as denoted in many of its leaders’ statements.

Al-Monitor also learned that an internal Hamas decision was taken not to publicly talk about the operation, for fear that Israel would construe that as an admittance of responsibility on its part. In the meantime, some of the movement’s leaders have decided to keep out of sight after Israel directly accused Hamas of being responsible for the operation.

However, Al-Monitor interviewed a former Hamas military activist who participated in an earlier kidnapping of an Israeli soldier in the 1990s in the Gaza Strip. He analyzed the Hebron operation from a military standpoint, saying: “An operation of this kind is complicated both from a security and military standpoint. It is undoubtedly the handiwork of a large organization that has a network in place to help move the kidnappees and provide them with safe shelter, food, sleeping arrangements as well as security.

“It is not difficult to imagine which Palestinian organization possesses such an infrastructure. In its various aspects, the operation is both easy and difficult. The West Bank’s military geography aides in hiding soldiers or settlers for relatively long periods of time, as a result of the rugged mountainous terrain. In addition, Hamas possesses a great deal of popular support in Hebron specifically, as evidenced by the presence there of the Qawasmi, Jaabari and Rajoub families, which include hundreds of Hamas members and supporters. On the other hand, the West Bank’s weakness lies in the extensive Israeli military presence there, and the security coordination in place with the Palestinian Authority [PA], which constitutes a challenge that must be overcome by the kidnappers.”

Concerning Israeli fears about the kidnap victims being moved to the Gaza Strip, the military field activist said: “That would require a miracle to accomplish. The distance between Hebron and Gaza is 50 kilometers [31 miles] on average, and is full of military checkpoints. Embarking on such a mission is replete with dangers and the possibility of detection is great.”

Although the operation occurred in the West Bank, its reverberations were felt in Gaza, where Israel bombed targets belonging to the Izz ad-Din al-Qassam Brigades in various cities of the Gaza Strip on June 14-15. Israel also deployed Iron Dome batteries in southern Israeli cities, particularly Ashdod and Ashkelon, out of fear of Palestinian rockets.

Despite the atmosphere engendered by the operation within Hamas' ranks, concerns are mounting that “Israel would embark on a campaign to restore its power of deterrence by inflicting painful blows to Hamas, to the point of assassinating some of its political and military leaders, and make the operation highly costly, under the pretext that operational orders were issued in Gaza,” the Hamas official told Al-Monitor.

But Osama Hamdan, Hamas’ head of foreign affairs, excluded "the launching of a military operation against Gaza,” noting, however, that “escalation is possible to divert attention from Israel’s security failure in the West Bank.”

In this regard, Hamas parliamentary bloc spokesman Mushir al-Masry said: “Any military escalation against Gaza would be a futile adventure that will not lead to any information about the kidnappees. The quickest way to put this incident behind us is to release the [Palestinian] prisoners.”

Absent from these proceedings is the PA, which Netanyahu held responsible for the operation because of its reconciliation with Hamas.

In turn, the PA rejected those accusations, and announced that it was cooperating with Israeli security agencies in the search for the kidnappees.

But in an exclusive interview with Al-Monitor, a PA political official warned: “Israel could exploit this operation to execute a right-wing agenda to get rid of whatever remained of the PA’s presence in the West Bank, as occurred during the 2002 Operation Defensive Shield. Israel could launch a full-scale military invasion under the pretext of searching for the kidnappees, while doing away with the PA’s capabilities.”

It's premature to talk about espoused scenarios by Israel or Hamas as a result of developments from the Hebron operation. But the atmosphere inside Hamas indicates that the movement is on the verge of a new confrontation with Israel, which will be more severe than preceding ones. This is regardless of the results of the kidnapping operation, and whether it will lead to a prisoner swap deal, as Hamas hopes, or the kidnappees are found and released, as Israel desires.

It would seem that, whatever occurs next, confrontation is inevitably at hand.