Hamas leaders are also concerned that Israel will launch a military campaign if the kidnapped boys are not found. 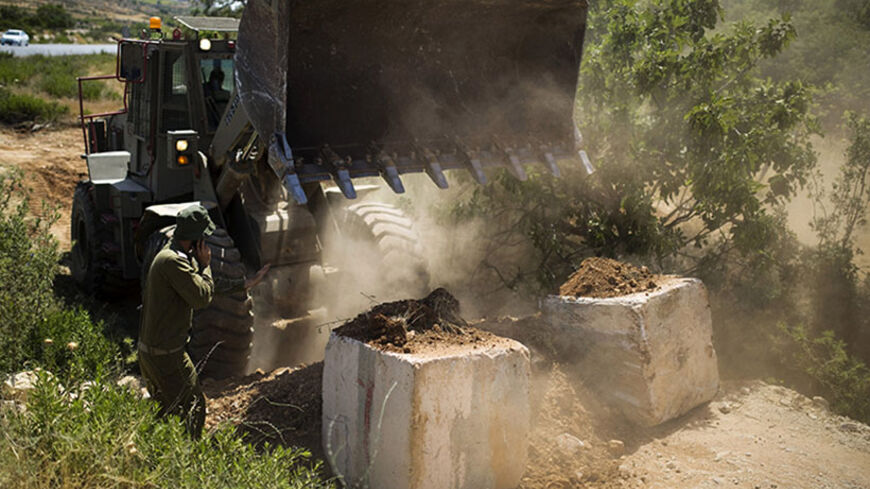 Israeli soldiers block a side entrance into the West Bank city Hebron during an operation to locate three Israeli teenagers, June 17, 2014. - REUTERS/Amir Cohen

It was clear that Israel accusing Hamas of kidnapping the three teenagers in Hebron on June 12 would open a new page in the conflict between the two, even without Hamas claiming responsibility for the act.

Israelis made threats against Hamas and started a widespread arrest campaign netting more than 200 Hamas members, of different levels, in the West Bank. Those arrested include members of the Palestinian Legislative Council, former ministers, university professors, along with field operatives and more than 50 former Palestinian prisoners who were recently released in the prisoner exchange deal with Israeli soldier Gilad Shalit.

For its part, Hamas “warned against this campaign because it crossed all red lines. It cannot be tolerated and will have serious and unlimited implications.”

A Hamas field official from the West Bank, who hasn’t been arrested yet, told Al-Monitor in a phone interview, “Israel’s arrest of Hamas leaders is useless at the security level and will not provide Israel clues leading to the perpetrators of the Hebron operation. The main purpose [of Israel’s action] is to punish Hamas and send it a deterrent message by destabilizing the organizational structure of the movement and cutting communication among Hamas elements in West Bank cities.”

The official added that Israel was targeting Hamas for domestic reasons. “What is important in the campaign against Hamas is that Israel wants to please its people who are angry with [the Israeli government] for not being able to protect the three teenagers. So the army is trying to turn the tables by sending a message to Hamas that holding the abductees is a burden on [Hamas] and not an achievement for it, despite the fact that the movement didn’t formally claim responsibility for the operation,” the official said.

But Israel went a step further in punishing Hamas and raised the possibility of deporting a number of Hamas figures from the West Bank to the Gaza Strip.

This prompted Hamas “to warn Israel from deporting any [Hamas] figures to Gaza, threatening to confront any decision of this kind through escalatory steps on the ground to prevent it.”

In an interview with Al-Monitor, a Hamas political official from Gaza expressed his concern about an Israeli scenario that might take place in the coming days whereby “the Israeli army would forcefully deport dozens of Hamas leaders from the West Bank to the Gaza Strip via the Erez crossing on the border with Israel, and then leave them in the Gaza Strip and close the crossing.”

This isn’t the first time Israel has tried deportation against Hamas as a means to punish it, the Hamas official said.

“It is true that Hamas has foiled the deportation process to southern Lebanon in 1992, when Israel exiled more than 400 [Hamas] leaders there. Most were able to return to the occupied territories. But the conditions are different today because Gaza and the West Bank are a single political entity. It would be difficult to force Israel to return the West Bank leaders to their homes, which means turning Gaza, in the world’s eyes, into a hostile area because it hosts figures who are accused of fighting Israel,” the official said.

The official said the deportation of Hamas figures from the West Bank might leave a political vacuum in the movement in the territory. “The most negative effect would be that the deportations would empty the West Bank of field and political leaders. There’s a fear that the movement would have a leadership vacuum for a period of time. Israel is trying to use the Hebron operation to implement a plan to liquidate the movement in the West Bank. It would be a very harsh decision against Hamas, because it would leave tens of thousands of [Hamas] members without political leadership and organizational references.”

Hamas is also concerned that Israel may respond by conducting a major military campaign against Hamas that may go as far as assassinating some Hamas leaders.

Al-Monitor obtained a Hamas position assessment report that was prepared in recent days. It said: “The movement is convinced that there’s an Israeli consensus that punitive measures against [Hamas] in the West Bank go beyond the Hebron kidnapping because the army is conducting a rolling large-scale military operation to hit [Hamas] bases and political presence under the guise of trying to find the perpetrators of the attack. Israel intends to exploit the military opportunity till the end and exploit the international atmosphere to carry out detailed combing operations for a long time and to suppress Hamas bases.”

Hamas’ response to the Israeli campaign against it was not limited to statements and declarations. Hamas also held a press conference in Gaza on June 17, which was attended by Al-Monitor. A number of armed wings were present at the conference, including the Izz ad-Din al-Qassam Brigades, which threatened Israel that “it will not stand idle in the face of Israeli violations in the West Bank.”

According to the position assessment report that Al-Monitor obtained, the prevailing debate within Hamas “doesn’t support starting a hot military confrontation with Israel at this stage, at least not in Gaza, so as not to give [Israel] an opportunity to export to Gaza its security failure and its military fiasco in the Hebron operation, unless a confrontation was imposed by the assassination of a senior figure.”

The Islamic Jihad movement also said that “it will respond in full force to any Israeli targeting of Palestinians in the West Bank and will not be far away from the circle of retaliation and confrontation because Israel found in the Hebron operation a justification to escalate its attacks against the Palestinian people.”

Interestingly, the situation on the ground in the Gaza Strip is witnessing mutual rocket launches between Israel and armed groups, whereby a number of rockets are falling on southern Israeli towns while Israeli aircraft respond by bombing a number of targets in Gaza.

The atmosphere prevailing over Hamas in Gaza, according to what a Hamas official told Al-Monitor, is to “not respond strongly to Israel’s campaign against [Hamas] in the West Bank and absorb [Israeli] anger after it lost three teenagers. Any response from Gaza that exceeds a few ineffective rockets may force Hamas into a major confrontation with Israel. Hamas is trying to rally public opinion behind it and behind the Palestinian armed forces, which have expressed their desire to join [Hamas] in any future battle with Israel, noting that Gaza is like quicksand. Every hour, there’s something new.”