A senior Palestinian officer working on the case of the murdered Israeli settlers said it was likely that they were killed shortly after being kidnapped. 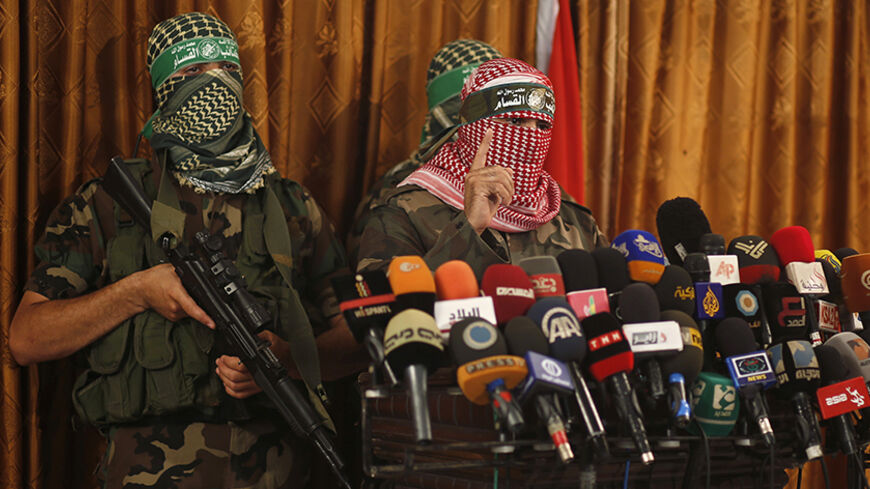 Palestinians and Israelis have been living in uncertainty in the past three weeks following the murders of three Israeli settlers and Palestinian teenager Mohammed Abu Khdeir. The discovery of the bodies of the three Israeli boys has opened the door to further speculation as to what actually happened, for Israel insists Hamas was responsible, while Hamas continues to deny involvement.

Al-Monitor spoke with a senior Palestinian officer involved in coordination with his Israeli counterparts in the West Bank to answer lingering questions after the boys’ bodies were found and Hamas was accused of kidnapping and killing them. Some of these questions include: How did Israel find the teenagers? Why were they killed? When were they killed? Were they kidnapped to be used in an exchange deal, or were they kidnapped to be killed? Was Hamas’ leadership involved in the details of the operation, or did Hamas just issue general directives?

“From the outset, we were convinced that the settlers were killed immediately after being kidnapped. That’s because of several considerations, most importantly is that holding them for a swap deal was impossible due to the lack of a logistical infrastructure. The security estimate was that the plan was to kidnap just one soldier or settler, not three, because of the difficulty of holding them for a long period of time. Hamas had done similar operations, such as the kidnapping and killing of the two soldiers Avi Sasportas and Ilan Saadoun in the Gaza Strip in late 1989, and the officer Nassim Toledano in the West Bank in late 1992. The soldiers were held for several days and then killed and their bodies kept,” the officer said.

Al-Hayat Al-Jadida newspaper, a Palestinian Authority outlet, said that the Hebron operation was a “local operation and Hamas’ leadership in Gaza is not linked to it.”

However, the officer Al-Monitor interviewed said, “The investigation by the security forces with members of Hamas has given us a picture that there was no direct operational control of the Hamas leadership with its members on the ground, whether because of the direct hits to its armed cells or because of an unwillingness to get the Hamas political leadership involved in details whose complexity it doesn’t know.”

This goes along with what Hamas leader Khaled Meshaal said on Al Jazeera on June 23. “[Hamas] doesn’t give instructions 'to do' or 'to not do' to the military wing, because it has fixed lines and the [Izz ad-Din al-] Qassam Brigades knows its duty,” he said.

About those suspected of doing the operation, Al-Monitor’s Shlomi Eldar discussed the Qawasmeh family, to which one of the perpetrators belongs.

The Israeli Al-Masdar website published a report that the Qawasmeh family was responsible for the settlers’ disappearance and killing.

But Al-Monitor’s Daoud Kuttab said Israel was practicing collective punishment against the family because of one individual, although the family included doctors, engineers, lawyers, playwrights and poets.

Al-Monitor has learned from local sources in Hebron that the Qawasmeh family is “one of the largest families in the city. Its members number approximately 10,000. It gave 17 martyrs during the intifada, and Israel arrested 150 of its members after the disappearance of the teenagers, because most of the leaders of the Hamas military wing are from [this family].”

A Hamas field official from the West Bank, whom the Israelis didn’t arrest, spoke with Al-Monitor in a telephone interview on condition of anonymity for security reasons. He said members of the Qawasmeh family who might be affiliated with Hamas "wouldn’t carry out an operation or do individual acts that would cost [Hamas] dearly.”

When asked if this meant that the perpetrators of the operation were directly ordered by the Hamas leadership, he replied, “Only the perpetrators can answer this question. They are still wanted by Israel up to now. But one cannot talk of uncontrolled cells that conduct such strategic operations of far-reaching consequences [out of their own desire]. The only story we have is what Israel has been repeating.”

This was confirmed by Hamas spokesman Salah al-Bardawil. “Hamas has no idea about the kidnapping because it is an Israeli story. And as long as this story is present and exists, we will not comment, although we bless the operation,” said Bardawil.

Yet, regardless of how much the Hamas leadership supervised the Hebron operation, it is clear that Hamas is heading toward a confrontation with Israel because of that operation.

A Hamas political official abroad told Al-Monitor that “Hamas is certain that the countdown to the attack by Israel is imminent. The question remains about the timing of the attack, what it will include, and whether it will be narrow or wide in scope. Thus, we have taken the necessary security precautions and have mobilized all the movement’s arms — military, security and media — in preparation for what’s coming.”

He added, “Instructions were issued from the movement’s top leadership to all organizational levels to take the Israeli threats seriously and to be careful while using telephone and electronic networks, because the prevailing view within the security forums indicates that Israel is in the process of targeting major figures in the movement.”

This was confirmed by Ghazi Hamad, the undersecretary of the Foreign Ministry in Gaza. He told AFP, “Hamas is not interested in escalating things, but Israel wants to avenge the killing of the settlers and make Hamas pay the price. [Hamas] is in contact with many parties to ensure there’s no escalation against Gaza.”

Al-Monitor spoke by telephone with Izzat al-Rishq, a Hamas political bureau member, about this issue. “The threats against Gaza could inflame the region because [Israeli Prime Minister Benjamin] Netanyahu is 'escaping forward' and 'jumping in the air' and he should know that just because he can decide to start the escalation, he’s not the one who decides when it stops. The Gaza wars were a good example of that,” said Rishq.

This came in conjunction with the announcement by Hamas spokesman Sami Abu Zuhri that “Netanyahu’s threats do not scare Hamas. He is responsible for the escalation. And if he starts a war on Gaza, the gates of hell will open on him.”

A number of armed wings in Gaza issued a joint statement in which they confirmed their “readiness to confront any Israeli attack and Hamas will not be left alone in the arena of confrontation.”

On the ground in Gaza, there’s a state of anticipation and extreme caution, after the Israeli government’s marathon meetings, which discussed ways to respond to Hamas after the Hebron operation.

In the last few days and until this writing at dawn on July 3, Israel has bombed dozens of targets in the Gaza Strip in response to what it said was the launching of Palestinian rockets from Gaza against southern settlements, and continued to amass troops on the Gaza border.

Moreover, Al-Monitor has learned from influential circles in international institutions operating in Gaza that they have asked their employees to store additional quantities of food and supplies in their homes and offices, and to inform foreign nationals to raise the flags of their international organizations over their homes to avoid any harm if a confrontation erupts in Gaza.

But a senior Hamas political official in Gaza told Al-Monitor that the state of secrecy imposed on the Israeli government’s decisions against Gaza, in its meetings between June 30 and July 2, “leads us to believe that a harsh military campaign is coming to Gaza and that it will be more than the current pace of intermittent shelling that prevailed in the past weeks, but less than total war as in 2008 and 2012. In any case, we are on the verge of escalation, for which we are preparing well.”