Hamas leaders are reaching out to regional allies to try restrain Israel from taking military action in response to the kidnappings. 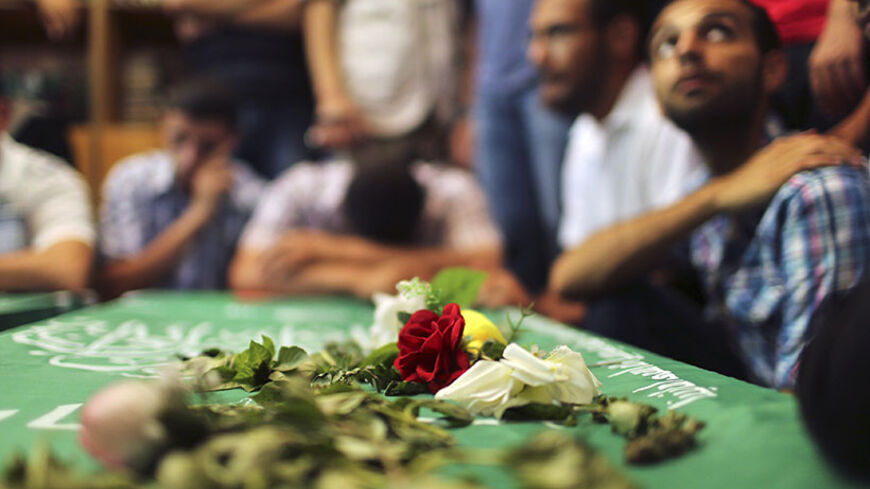 Mourners surround the bodies of Palestinian members of Hamas' armed wing during their funeral at a mosque in Gaza City, June 21, 2014. - REUTERS/Mohammed Salem

Going into the third week since the disappearance of the three Israeli settlers from the West Bank, Hamas, which Israel accused of the kidnapping, feels that an attack against it in the Gaza Strip is imminent. The concern has become even more pressing with reports that three bodies were found near Hebron, the home city of the two Hamas-linked suspects identified by Israel last week as Marwan Qawasmeh and Amer Abu Aisha.

Al-Monitor has learned that Hamas leaders in Gaza have virtually disappeared from sight, with journalists facing great challenges in reaching them. Hamas has implemented strict security measures to thwart any Israeli attack against its leaders, who resurfaced only to attend the funeral of five Izz ad-Din al-Qassam Brigades militants who died on the evening of June 20, when a tunnel collapsed on them in eastern Gaza.

The public daytime appearance of Hamas’ political leadership in this way caused concern for security officials in the Gaza Strip, who told Al-Monitor about their fear of Israel’s ability to track the leaders' movements and possibly assassinate them.

In addition to preventive security measures, Hamas has raised the level of its threats against Israel should it attack Gaza. On June 24, Zahar said, “The Qassam Brigades have upgraded their rocket capabilities and are now able to target any Israeli city in any upcoming battle,” while warning against waging an attack on the Gaza Strip.

Hamas’ concern of an imminent Israeli attack was evidenced by the evacuation of its security headquarters, for fear that it might be targeted by the Israeli air force.

The security measures carried out by Hamas in Gaza were bolstered by diplomatic and political efforts on the part of the movement abroad, whereby intensive contacts were conducted with Arab and international capitals to restrain Israel from dealing a severe blow to Gaza.

In this regard, Izzat al-Rishq, a Hamas official, affirmed in a telephone interview with Al-Monitor that between June 21 and June 25. Hamas leader Khaled Meshaal contacted the chairman of the Arab Summit, Kuwait’s Emir Sheikh Sabah al-Ahmad, as well as the Yemeni and Sudanese presidents and Malaysian Prime Minister Najib Abdul Razak. According to Rishq, this was to “inform them of the latest Palestinian developments, and discuss with them the Israeli threats against the West Bank and Gaza, in addition to the responsibility borne by Arab countries to back the Palestinian people.”

Rishq, who lives in Qatar, said, “Meshaal conducted other telephone conversations with the Qatari and Omani foreign ministers, Khalid al-Attiyah and Youssef bin Alawi; and Secretary-General of the Arab League Nabil Elaraby to discuss the position vis-a-vis the Israeli threat against the Palestinian people. He invited them to act, on an Arab and international level, to pressure Israel into halting its military operations.”

“Meshaal also telephoned Qatari Emir Sheikh Tamim bin Hamad al-Thani on June 26 to brief him on the developments of the situation in the occupied territories. Meshaal also sent a letter on the morning of June 27 to Iranian President Hassan Rouhani, asking him to support the steadfastness and resistance of the Palestinian people in confronting Israel. Furthermore, he contacted Gulf Cooperation Council Secretary-General Abdul Latif al-Zayani and the secretary-general of the Organization of Islamic Cooperation, Iyad Madani," Rishq said.

Meshaal has also held talks with the Russian president's envoy to the Middle East and Deputy Foreign Minister Mikhail Bogdanov, which indicated Hamas’ desire to bolster its relations with Moscow.

Meshaal’s diplomatic outreach was accompanied by his Al Jazeera announcement on June 23 that he had “met with a number of foreign delegations from foreign countries, some of which classify Hamas as a terrorist organization, and which, behind closed doors, curse Israel and demand that it is internationally sanctioned for the violations it perpetrates against the Palestinian people.”

On the other hand, Osama Hamdan, the head of Hamas’ international relations department, said it was likely that “Hamas would conduct a series of visits to a number of Arab countries soon.” He also revealed that the “substance of Meshaal’s contacts with those countries’ leaders revolved around Israel’s escalating military operations against the West Bank and Gaza, as well as the need to intervene and put an end to them.”

Al-Monitor asked an official within Hamas’ foreign affairs department about the benefit of the diplomatic efforts that have been recently made by Meshaal, after Israel identified the two suspects. “Undoubtedly [these efforts will be beneficial], Israel wanted through this accusation to cut the way to any international and regional condemnation of its expected offensive on Gaza, and this is what Meshaal has sought to achieve through his current political contacts. … It is not unprompted, but rather it is intentional that the Israeli accusation of kidnapping the settlers coincides with the movements in terms of diplomatic efforts,” the official said.

Al-Monitor has learned from a Hamas official that the movement was in the process of “preparing a political memorandum addressed to influential capitals of the region and the world as well as a number of international organizations, warning against an Israeli operation in the Gaza Strip. In the memorandum, Hamas disputed justifying the attack by accusing it of kidnapping the settlers and explained how Gaza was suffering from difficult living and economic conditions, rendering it unable to endure a new war.”

The official said, “The movement is in a race against time to disseminate the memorandum before any Israeli attack on Gaza. Yet, despite the fact that such a memo cannot prevent an attack, the two previous wars of 2008 and 2012 have confirmed that Israel came out a loser in the international war for public opinion, which the Palestinians began to win. And this is what we continue to work toward.”