Hamas leader shocks base, admits to 'mistake' in Gaza

Hamas leaders are divided over political bureau head Khaled Meshaal's statement that Hamas erred by attempting to rule Gaza alone for the past 10 years. 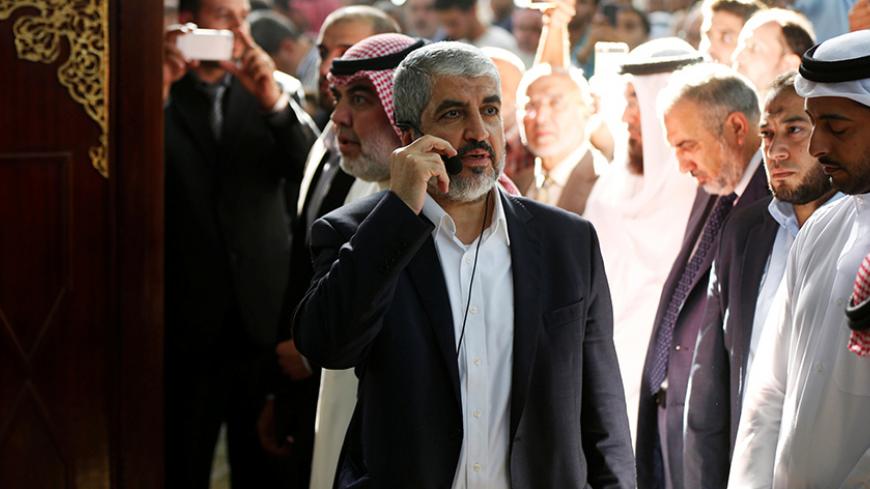 GAZA CITY, Gaza Strip — Head of Hamas’ political bureau Khaled Meshaal recently said that Hamas made a mistake when it decided to rule the Gaza Strip alone for the past 10 years. His statement led to many questions among the Palestinian people: Why did Hamas finally reach this conclusion? Is this a turning point in Hamas’ path toward Palestinian reconciliation? What are the future repercussions of this statement on the Gaza Strip?

Meshaal said during a dialogue session in Doha on Sept. 24 in the presence of his deputy Ismail Haniyeh, “Hamas made a mistake when it thought it was easy for it to rule the Gaza Strip alone following the Palestinian division with Fatah in the wake of its victory in the 2006 parliamentary elections. It thought that ruling Gaza would be easy, but discovered that it was hard.”

He added, “We made a mistake when we thought that Fatah’s days were long gone and that it was Hamas’ time now.”

Meshaal’s words shocked the movement’s public base and members who believe that its leaders are infallible. Hamas leader Ahmed Youssef wrote in an article headlined “Khaled Meshaal sings off key” published by a local media outlet on Oct. 1, “Meshaal’s statement was a slap in the face for many of Hamas’ youths. The word ‘mistake’ does not normally figure in their vocabulary or political discourse. Their religious and factional upbringing has given them the confidence to believe they are infallible.”

He added, “The statement that ‘we made a mistake’ has huge repercussions. Most Hamas leaders believe their ideologies are flawless and incontestable. They are convinced that they do not make mistakes and that the others are wrong and have gone astray.” Youssef added, “When I heard Abu Walid, aka Meshaal, saying ‘We made a mistake,’ I realized that [acknowledging the error was the right thing to do], even though the step is 10 years late. Admitting to one’s errors is the beginning of awareness and the first step toward change and reform.”

Political science professor at the Islamic University of Gaza Walid al-Mudallal told Al-Monitor, “I think that Hamas made a mistake when it decided to rule Gaza single-handedly without any political partnership with Fatah and other factions, in a complex political situation marked by Israel’s ongoing occupation of the Palestinian territories and the continuing internal division that has seriously affected all aspects of life.”

He added, “Hamas now realizes that it cannot rule alone because the world does not recognize it as a legitimate authority. Abbas dismissed the Hamas government in June 2007 and accused it of revolting against the legitimate government. For that reason, Hamas is seeking to be a political partner rather than an independent authority.”

Political analyst Talal Okal believes that Meshaal’s admission was wise, reflecting a spirit of reassessment that should be applied to all of Hamas’ policies.

Okal told Al-Monitor, “Meshaal reached this conclusion following the multiple crises that Hamas has faced. The movement failed to pay the salaries of 42,000 employees that it had appointed when it took over Gaza in 2007, following the decline of Iranian support and Egypt’s closure of Gaza’s border tunnels since July 2013.”

Okal noted that Hamas could not provide the basic needs for the Gaza Strip due to the Israeli blockade. It has been hard to supply electricity, for instance, and with the closure of the Rafah crossing in July 2013, the movement could not provide raw materials for many industries. As a result, economic development in Gaza came to a halt.

He continued, “People are dissatisfied with Hamas’ ongoing rule, and they are linking it to the persisting crises. To fix this mistake, Hamas must show more leniency to help the Palestinian reconciliation succeed, to foster political partnership in the leadership and to allow the consensus government — which was formed based on an agreement between Hamas, Fatah and the other Palestinian factions in June 2014 — to rule the Gaza Strip by handing over the crossings and ministries.”

Moussa did say he believes that all the crises facing Gaza’s citizens during Hamas’ rule “are a result of the alliance between Palestinian Authority President Mahmoud Abbas and Israel. Gaza is being punished by Israel on one side and Fatah on the other.”

He added that Israel has sought since day one following Hamas’ victory in the 2006 legislative elections to “ruin Hamas’ rule because the movement is holding onto its [focus on] resistance and Gaza remains the only fortress in the world that has not succumbed to Israel.”

Nevertheless, Moussa sees a possibility for partnership with Fatah, provided that negotiations with Israel are renounced and the choice of armed resistance is maintained.

In March 2007, Hamas and Fatah engaged in a partnership, forming the national unity government. However, it barely lasted three months, and Hamas took over Gaza in June 2007 and ruled single-handedly. That upset created the Palestinian political rift that is still going on.

Mudallal said, “The 11th government failed because Fatah did not commit to the series of understandings that both parties reached in the Mecca Agreement in February 2007, which led to the formation of said government. Fatah broke all other understandings, like reforming the Palestine Liberation Organization.”

Meshaal’s talk about the importance of unity and partnership with Fatah contradicts the statements of other Hamas leaders who sharply attack Abbas.

Protesting Abbas’ attendance of late Israeli President Shimon Peres’ funeral on Sept. 30, prominent Hamas leader Mahmoud al-Zahar said Oct. 1, “That man who claims to represent the Palestinians is a Jew, as per Sharia, and he was made by Israel. He does not represent us. We ask God that he burn alongside Peres in hell.”

Political analyst Hassan Abdo told Al-Monitor, “Meshaal is affiliated with a current within Hamas that is marked by moderation and openness.” He noted that another current within Hamas is more radical and believes Fatah is an enemy that must be subdued by all means. Abdo added, “Meshaal knows that subduing Fatah is impossible and that he cannot eliminate it because Fatah enjoys wide popularity. This explains Meshaal’s latest statements about the importance of national unity.”

Many Palestinians hope that Meshaal’s recent statements will put an end to the internal division and achieve political partnership between Fatah and Hamas. But actual change on the ground will be even more difficult to achieve.