Israel is no longer buying the distinction between Hamas' political and military divisions. 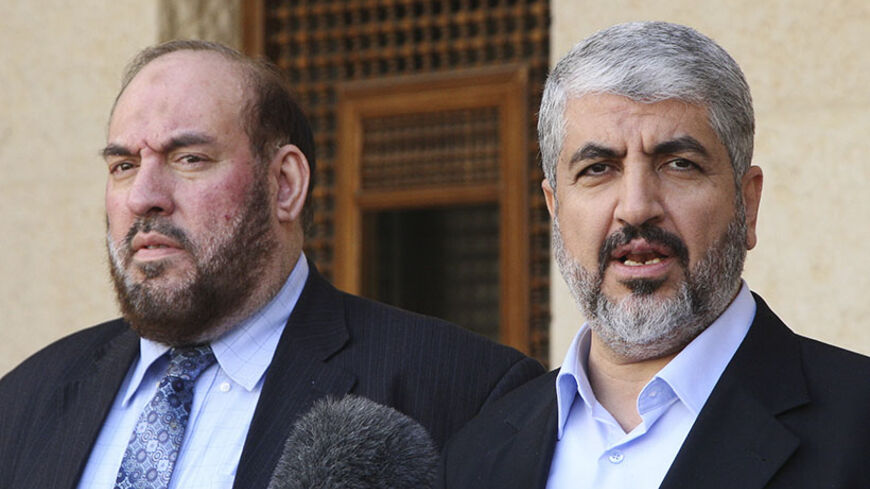 The interview given by Hamas' political bureau chief Khaled Meshaal to the Al Jazeera network on June 23 lent itself to three conclusions. First, that Hamas did, indeed, abduct the three (high-school) rabbinical students; second, that the kidnapping took the movement’s leadership by surprise; and, third, that he and the other movement’s leaders have no control over Hamas’ military wing — an embarrassing admission on Meshaal’s part.

“Hamas is comprised of a political wing and a military wing,” he said, and therefore he cannot give orders to the military echelons. “They are well-aware of Hamas’ policies and are committed to the movement’s political approach,” he said.

Any other leader of a political movement, party or entity would be embarrassed to admit that his military commanders do not accept his authority, but Meshaal is trying yet again to draw a dividing line between the various Hamas arms, as if this was not an organization that he heads. For years, Hamas’ political leaders attempted to present themselves outwardly as having no contact with, or responsibility for, the planning of terror attacks against Israel, so they wouldn't be targets for elimination.

Surprisingly, this distinction between the organization’s military and political arms was accepted, even in Israel, until the middle of the second intifada. Israel fought the people of the military wing — the heads of the Izz ad-Din al-Qassam Brigades were on the wanted list and targets for elimination, while the people of the political wing remained beyond the fighting and out of firing range.

This compartmentalization held only until the second intifada, as aforesaid. Ibrahim al-Makadmeh, Hamas’ so-called “strategist,” was the first of the movement’s political leaders to be eliminated by the Israel Defense Forces (IDF) in March 2003. His elimination erased the artificial line in the sand that the movement’s leaders tried to create between them and the planners and executors of terror attacks in Israel. Afterward, other high-ranking movement leaders were eliminated, like Ismail Abu Shanab, Hamas founder Sheikh Ahmed Yassin, Abdel Aziz al-Rantisi and so on.

Ever since the Hamas government was formed and the political arm of the organization became predominant, the same dividing line reappeared. Hamas bore responsibility for the million and a half residents of the Gaza Strip, and any attack on its political leaders would have caused a terrible brouhaha. The fear of chaos in Gaza served to shield the movement’s leaders from Israel’s wrath. The IDF hit armed activists of the military wing, and even the head of the military wing, Ahmed al-Jabari, but the movement’s political leaders still remained beyond firing range.

After the abduction of the three students, Israel faces the same dilemma and must make a strategic decision quickly: Where should the line of responsibility be drawn between the military wing of Hamas and its political wing? This time, the movement’s leaders — Meshaal, Ismail Haniyeh and Mahmoud al-Zahar — have made the decision-making process easier, simpler and even more focused.

Haniyeh, Hamas’ soon-to-be former prime minister, declared on June 23 in Gaza that the third intifada had already begun in the West Bank, and that Hamas has “earthshaking surprises” in store. His words were not only factual statements, they also encouraged and even gave the green light to break the rules between Israel and the Palestinian Authority — the same authority that the Hamas movement joined only a month ago.

In the course of the funerals in Gaza of the Hamas activists who were killed while digging a tunnel in Rafah (on the Gaza-Egypt border), Zahar warned that the military wing has rockets and missiles that can reach every city in Israel. While we can interpret this statement as a rejoinder to the fear of an Israeli military reprisal, there is no doubt that such a statement shows how the movement’s leaders are themselves blurring, with their own voices, the imaginary line between the military and political wings.

The movement’s leaders escalated their statements after the abduction and were boasting of the capabilities of the military wing — whom they claim not to have control over. Therefore, Hamas’ political wing cannot continue to repudiate responsibility. This is their big mistake. The change that they led — entering a national unity government with Fatah — no longer provides them with an ''insurance policy'' against Israeli reprisals. Instead, it imbued them with ''warranty'' — responsibility over the military wing.

Israel avoided striking the movement’s leaders in the last two large rounds of conflict in Gaza, the IDF operations Cast Lead and Pillar of Defense. Haniyeh was not a target due to the strategic decision taken by Israel’s diplomatic echelons, which decided not to demolish the Hamas regime out of fear of chaos in Gaza. As a result, Zahar was also shielded from harm. He was one of the negotiators for the release of abducted soldier Gilad Shalit, and a close associate of German mediator Gerhard Conrad.

But ever since the Palestinian national unity government was established, and Hamas transferred the reins of power (or at least some of them) back to Abbas and the Fatah movement, the responsibility for Gaza rested on other people’s shoulders. Israeli concern about possible chaos in Gaza will no longer serve as a shield to the Hamas leadership. On the contrary, the weapons used by Israel to halt the second intifada would be the same weapons it adopted again to stop a third intifada, should it erupt with Hamas’ encouragement.

Thus, it emerges that Hamas’ political arm is caught between the hammer and the anvil: between its military arm which does not obey it, and Israel, which views it as responsible for the abductions of Eyal Yifrach, Gilad Shaar and Naftali Frenkel.