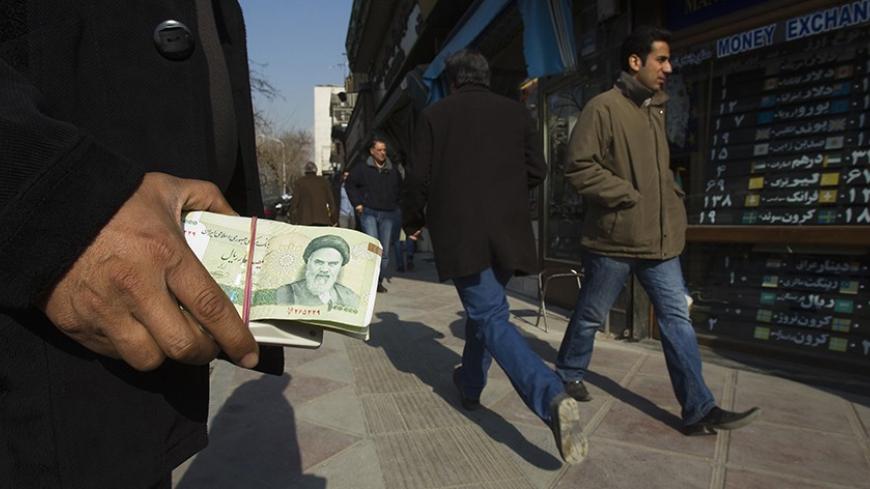 Al-Monitor has learned from Gaza sources that Iranian financial support has resumed to Hamas, but at a level lower than that which preceded the rupture between the two at the end of 2012.

Gaza political circles have been wondering whether Hamas would return to the Iran axis after a break that lasted more than two years. On March 10, leading Hamas figure Mahmoud al-Zahar, the last link between Hamas and Iran, announced steps to restore the bilateral relationship.

Al-Monitor has learned from a source close to Hamas’ political leadership that Iran is also planning to receive Hamas leader Khaled Meshaal soon, after a long tug of war marked by undisclosed shuttle discussions. The source said that Qatar was mediating with Iran to restore ties with Hamas. In late February, Qatari Foreign Minister Khalid al-Attiyah visited Tehran for that purpose.

In his meeting with Meshaal and in his recent and first visit to Qatar, Islamic Jihad Secretary-General Ramadan Shalah discussed the details of the upcoming visit to Tehran.

The resumption of relations between the two sides was announced March 10 by head of the Iranian Shura Council Ali Larijani, who said, “Iran is supporting Hamas on the grounds that it is a resistance movement. ... Our relationship with [Hamas] is good and has returned to what it was. We have no problems with [Hamas].”

Al-Monitor surveyed a number of Hamas leaders of first and second rank at home and abroad about how they feel about a renewed relationship with Iran. In a meeting at his Gaza office, one Hamas leader told Al-Monitor, “The movement is not jumping from one lap to another, from Iran, then Egypt, then Qatar and finally back to Iran. [Hamas] has not necessarily erred. Rather, [Hamas] is in harmony with itself and with its Islamic and national liberation line. [Hamas] has sided with the will of the people, their right to freedom and [their right] to form their political system.”

The source conceded that the turn in regional events following former President Mohammed Morsi’s ouster in Egypt has hastened the progress of Iran-Hamas ties. Improvement in ties between Qatar, which is home to Meshaal, and Iran is also a key factor in Hamas’ own warming of ties with Tehran.

“Of course, the developments in the region have accelerated the return of relations between Hamas and Iran,” the source added. "Perhaps the most important [of those developments] is Hamas’ harsh break with Egypt after the coup and the tension between Qatar and Saudi Arabia. The [tension] has helped warm the relationship between Doha and Tehran, and that has cast a shadow over Hamas in a positive way."

Youssef Rizqa, the former information minister in the Hamas government, described the relationship with Iran as stable and said that the two sides agree on many issues, most notably the conflict with Israel.

Hamas was pleased with the resumption of financial support, as it signaled that there is no veto on the movement by decision-making circles in Tehran. Furthermore, Hamas is optimistic that Meshaal’s visit will result in increasing Iran’s financial support.

The latter was confirmed by Ahmed Youssef, a former political adviser to Palestinian leader Ismail Haniyeh, who said that Hamas is keen to develop its relationship with Iran because the two are strategic partners and have agreed to show understanding for their respective positions on contentious issues, especially the situation in Syria.

However, the return of Hamas-Iran relations will not necessarily be lauded all of Tehran’s allies, notably Syria and Hezbollah, who do not agree about accepting Hamas back into their axis.

A senior Palestinian figure in Lebanon sought to mediate reconciliation between Hamas and Hezbollah in conjunction with that between Hamas and Iran. In a telephone interview with Al-Monitor, he confirmed that Hezbollah claims that Hamas elements are turning a blind eye to the smuggling of weapons to Syria through Lebanon and that some Hamas elements have been discovered fighting in Syria. He also noted that some Palestinians have been involved in the bombings in the southern suburbs of Beirut, although this is denied by Hamas.

“The closed-door mediation efforts between Hamas and Hezbollah in Beirut has culminated in them ‘agreeing to disagree’ regarding Syria and in continuing the ‘strategic partnership,’” he noted.

This same idea was expressed by Hamas figure Salah Bardawil, who said that Hamas’ relationship with Hezbollah is good despite the differences over Syria. He also noted that efforts are being made to restore relations as beneficial to both parties.

Hamas is not limiting itself to talk of improving its relationship with Hezbollah, but has begun to send delegations to Lebanese parties to absolve Hamas of accusations that it is the main incubator of jihadist and Salafist groups in Palestinian refugee camps in Lebanon; this has prompted Hamas representatives to act to prove their innocence to Hezbollah. The links between the two sides are still there and neither side is thinking of cutting them, despite the complexities and differences, especially since their common ground is substantial.

Jihad Taha, a Hamas figure in Lebanon, said in a March 16 interview with Sadaaden.com that his movement is considering launching an initiative to strengthen Lebanese-Palestinian relations and prevent sectarian strife, indicating that Hamas wishes to improve its relationship with Hezbollah through a series of intensive meetings and visits with Lebanese security authorities to ensure its success.

A source close to Hamas told Al-Monitor that the return of Hamas’ relations with Tehran can be seen as part of the “card reshuffling” in the region in the last few months as a result of the changes in Egypt and Syria.

“The return of the relationship between them is now at hand, because the decision-makers in Shiite Tehran, in light of the sectarian and political polarization dominating the region, want to restore the relationship with Sunni Hamas and strengthen ties with it. Hamas, in turn, needs such a relationship at this critical stage and hopes that Meshaal’s visit will accomplish that. This will pump new support in Hamas’ arteries and help it withstand the siege, which is worsening in an unprecedented way.”