Following a split between Iran and Hamas over a number of regional issues, most prominently the Syrian conflict, the two sides have once again restored relations, according to sources in Hamas. 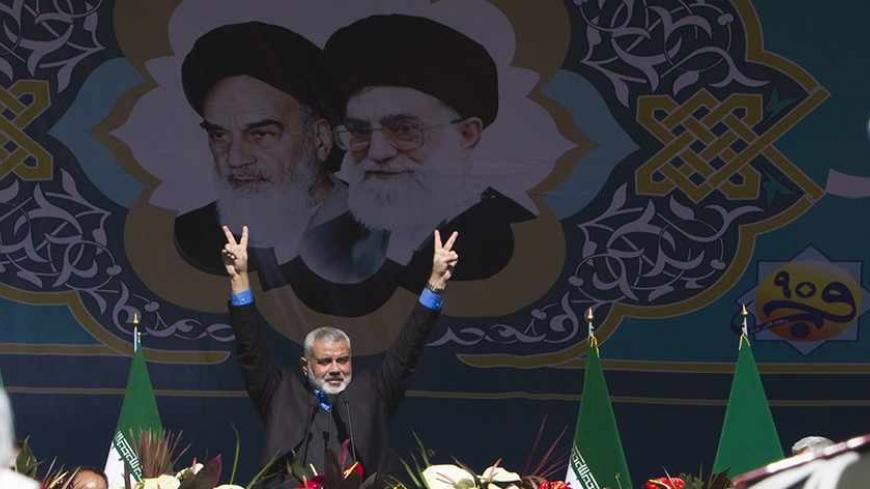 GAZA CITY, Gaza Strip — High level sources within Hamas have confirmed that warm relations with the Islamic Republic of Iran have been restored, following a number of meetings between the two sides held in various Arab and Islamic capitals. These meetings were convened to restore what has been tarnished over the last two years, following the Hamas leadership’s withdrawal from Syria and its decision to support the “revolution.”

Multiple sources from within Hamas, speaking in a number of separate interviews, have told Al-Monitor that prominent figures in the Iranian government have contacted leaders in Hamas to hold meetings with the goal of healing the rift between the two sides. This has led to a series of preliminary understandings that has [tentatively] revived ties between the two parties once again.

The same sources pointed out that the two highest-level meetings to have been held between the two sides involved the head of Hamas’ political bureau, Khaled Meshaal, and another unnamed high-level representative. They met in the Turkish capital of Ankara during Meshaal’s visit to Turkey in October. The other top-level meeting was held in the Qatari capital of Doha.

Both sides held a number of meetings bringing together leaders of varying degrees of seniority in four Arab and Islamic capitals: Doha, Beirut, Ankara and Tehran. Over the course of these meetings, both sides have discussed the details of cultivating relations and the need for moving past earlier crises. And, according to sources in Hamas, this has in fact taken place.

The relationship between Hamas and Iran had deteriorated to its lowest levels since the outbreak of the Syrian crisis. This had been accompanied by the Hamas leadership’s public departure from Damascus, as well as Hamas withdrawing its representative from the Iranian capital of Tehran. In the meantime, communication remained confined to the level of personal ties between members of the two sides. This led to a halt in the funding that Hamas received from Iran, estimated by Al-Monitor’s sources at around $23 million per month.

However, the sources confirmed that Iran had resumed its financial aid to Hamas after ties were restored between the two, and part of the funding had reached the Gaza Strip during the past three months. However, according to the sources, the amounts of aid are limited due to the logistical difficulty of getting funds to the Gaza Strip because of the prevailing security conditions in the Sinai Peninsula and Syria as well as in Lebanon.

Bassem Naim, a Hamas leader, confirmed that ties between the group and Iran had resumed, stating, “Ties had never been conclusively severed, but recently there have been a number of meetings that brought new blood back into our relationship with Iran.”

Speaking to Al-Monitor, he said, “There were several visits and meetings, as there had been previously. But this time the meetings were held at a high level on the part of Hamas and Iran. This led to a marked improvement and progression in the relationship.”

Mahmoud al-Zahar, a member of Hamas’ political bureau in the Gaza Strip who last visited Tehran in June, expressed his view that the renewed relationship is only natural, given the election of a new leadership in Iran. According to him, the stagnation in Hamas-Iran ties prior to that point was the result of the Iranian leadership’s preoccupation with elections and the Syrian crisis.

In an interview with Al-Monitor, Zahar said, “I am in constant contact with the Iranians, and it is clear that the new leadership in Iran follows the same old policy as pertains to the Palestinian crisis and the resistance factions. I don’t believe that this will be affected, even in the event of any sort of reconciliation between Iran and the West.”

In Naim’s view, the new Iranian leadership is eager to gain “powerful new cards in its negotiations with the West by strengthening its relationship with other powers in the region — and Hamas must be considered to be at the forefront of these powers — to gain leverage in the final negotiations yet to come.”

Hamas is now going through a harsh political and financial crisis as a result of the political circumstances that the Arab world is experiencing, particularly the countries affected by the Arab Spring. This has led to Hamas’ political isolation, especially following the ouster of former Egyptian President Mohammed Morsi from power and the Egyptian army’s imposition of harsh restrictions governing the smuggling of goods and money through the tunnels running from and to the Gaza Strip.

The sources noted that the frequency of communications between Hamas and Iran has increased following the fall of the Muslim Brotherhood’s regime in Egypt. At first, however, Hamas was not eager to upgrade those communications and meetings, for fear that it would appear as if the movement was returning to the Iranian embrace from a position of weakness, following the collapse of a friendly and supportive Egyptian regime.

Hamas believes that Iran perceives Hamas to be the largest Sunni movement in the Arab world without which it would not be able to penetrate and influence the Arab street or demonstrate its support for the Palestinian cause, which successive leaders of the Iranian revolution had so long advocated.

Hamas attempted in its latest military confrontation with Israel in November 2012 not to make apparent the Iranian military support it received. For instance, when Hamas bombarded the Israeli city of Tel Aviv, it claimed to have done so with a locally manufactured M-75 rocket, rather than an Iranian-manufactured Fajr rocket, despite possessing the latter. In contrast, the Palestinian Islamic Jihad movement offered public praise and acclaim for Iran’s support following this confrontation.

The same sources in Hamas told Al-Monitor that arrangements “may be made for a visit by the head of the political bureau, Khaled Meshaal, to the Iranian capital, Tehran, in the coming period, subject to regional political circumstances. [If it comes to pass], it would serve as a de facto official announcement that relations between both parties had resumed, and [shortly thereafter] a new representative for Hamas would be stationed in Tehran.”

Rapid changes took place during the latter half of 2012 in the conditions governing political life among Palestinians and Arabs. Events in Egypt, Iran’s tentative agreement to a reconciliation with the international community, [accompanied by] the cessation of threats to wage war against it and the relative stability of the Syrian regime — all these are factors which have pushed Hamas and Iran to pump new blood into the veins of the diplomatic relationship between them.