The war on Gaza offers an opportunity to renegotiate the strategic relationship between Hamas and Hezbollah, whose relationship has been severed over the past three years, providing major obstacles can be overcome. 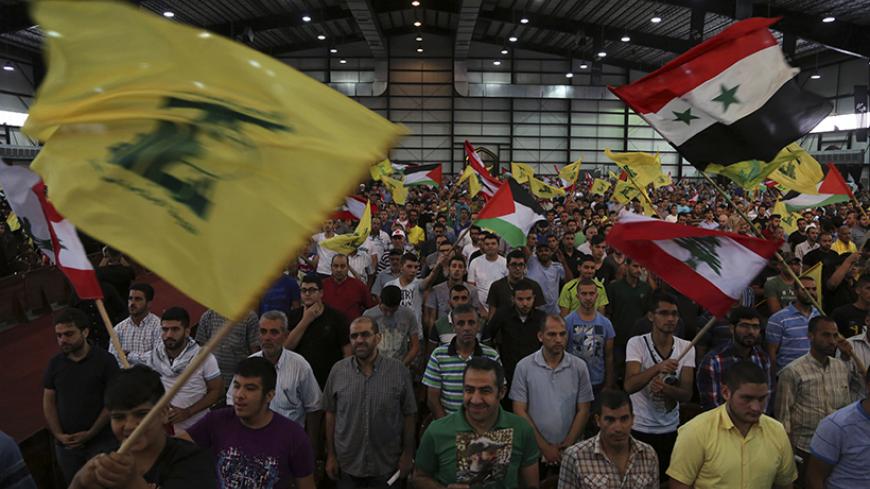 The Gaza war has contributed to breaking the ice between Hezbollah and Hamas after they have been at odds over the Syrian crisis. During the past three years of severed relations, there has been no public interaction between the officials of either parties, but with the Gaza war escalating, the situation has changed. On Aug. 4, Ali Baraka, a Hamas political official in Lebanon, appeared along with the vice president of Hezbollah’s political office, Mahmoud Qamati, in the southern suburbs of Beirut on a joint occasion to support the Gaza Strip. The Hezbollah-affiliated Al-Manar channel hosted Baraka to speak about Hamas’ take on the war on Gaza. Baraka probably expected that the outcome would lead to mending ties between Hamas and the axis of resistance — Iran, Syria and Hezbollah.

The party’s sudden interest in Baraka in particular serves as an indication of potential political calls with Hamas. He is considered a liaison between the two political parties, and during the rupture between them, he tried to play the role of mediator to settle their differences. However, Hezbollah ignored Baraka’s attempts at the time because it knew that Khaled Meshaal, head of Hamas’ political bureau, finally settled with the other axis, Qatar/Turkey. Despite the rupture with Meshaal’s command, Hezbollah still maintained minimum levels of political relations with Hamas.

A leading Palestinian figure who has previously served as mediator between both parties told Al-Monitor that despite the apparent indications pointing to the end of the Hamas and Hezbollah rupture, there are still major obstacles impeding full normalization of relations.

This source noted that the main challenges include Hezbollah's need to take into consideration Damascus’ stance on restoring full relations with Hamas. Syrian President Bashar al-Assad insists that he might contemplate the idea of reconciliation with Hamas, but not before Meshaal steps down as leader.

The main obstacle here seems to stem from Meshaal and Assad’s personal and political disputes. They had been close friends for years, with Assad offering Meshaal many strategic advantages during his stay in Damascus. Such measures included putting a Syrian military airport at the disposal of Hamas and facilitating his empowerment in the Palestinian refugee camps in Syria to make him their sole leader. Assad today feels deeply disappointed with Meshaal after he went against him by supporting enemies who demanded Assad be toppled.

In addition to taking Syria into account, Hezbollah cannot overlook Iran in this regard. Tehran and Damascus both agreed on turning their backs on Meshaal, but Iran is leaning toward Hamas due to strategic interests that guarantee cards for Iran in the Arab-Israeli conflict — the core of which is the Palestinian cause. That is why Iran sees its relation with the Palestinian situation from a global perspective. This explains the fact that during its alliance with Meshaal, Iran tried to give Islamic Jihad — a movement that it is close to — legitimacy equivalent to that of Hamas. Iran later discovered that the Islamic Jihad movement could reach, at best, second place in Gaza in terms of power and could not compete with Hamas’ public popularity.

Iran is establishing relations with Hamas’ military arm, apart from its relationship with the movement’s political command. Hamas’ political bureau sees this relation as an attempt to affect the movement and achieve regional balances inside it. The same Palestinian figure revealed to Al-Monitor that in 2011 and late 2012, Meshaal adopted a strategy to replace Iran with Libya as a main source of armament for Hamas. Meshaal, who lives in Doha, appointed Ali al-Salabi — a historical leader of the Muslim Brotherhood in Libya — as mediator to deliberate with his brother, the general supervisor of the Muslim Brotherhood in Libya. The aim was to provide Hamas with weapons from the warehouses of Misrata. He added that most of the long-range rocket propellers (M-160 and M-75) that Hamas launched on Tel Aviv came from Libya. However, while these Libyan weapons constituted additional reinforcement to Iran’s military support for Izz ad-Din al-Qassam Brigades, they could not replace them. The reason is that most of Hamas’ local rocket fabrication techniques and its fighting strategies, starting with the complicated tunnel map, intrinsically relies on Iranian expertise in which Hezbollah participates.

The possible return of Hamas’ political leadership to the Iran-Hezbollah axis poses complicated questions. For one, even if it were possible to overcome the deep disputes between Assad and Meshaal, will Gaza Prime Minister Ismail Haniyeh, who is very close to the international Muslim Brotherhood and Qatar, agree with Hamas’ return to Iran and its axis?

Another subsequent question arises: After the Gaza war, will the new Hamas feel that the axis of resistance needs it more than it needs this axis, and will that prompt it to raise the bar for its conditions to deliberate with this axis?

The same Palestinian figure expects the relation between Hamas, Hezbollah and Iran to move on from this stage of overcoming the rupture to the stage of starting a difficult dialogue. It seems that Iran is planning to use the carrot-and-stick approach with Meshaal. It is warming toward him now due to an awareness that after the Gaza war, it will be important to have leverage in both Hamas’ political and military spheres. However, at the same time, Iran will aim at tightening its ties with al-Qassam arms and will give greater importance to supporting its presence in Hamas’ political bureau, where it has long-standing friends such as Mahmoud al-Zahar and Imad Alami, who was the political representative of Hamas in Iran for a while. Rumor has it that Tehran is betting on him to be Meshaal’s successor.