A series of meetings in Beirut have brought Hamas and Hezbollah closer, after their divided stances on the Syrian issue and in light of a possible conflict between Hezbollah and Israel. 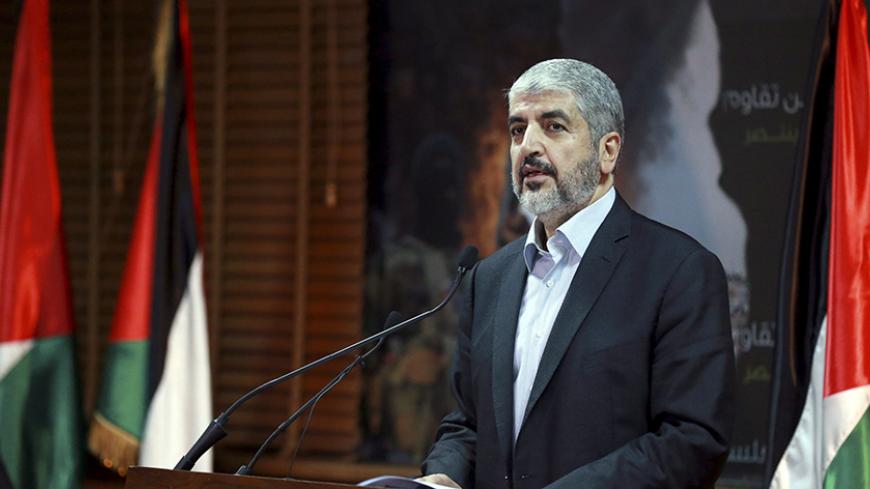 It is no longer a secret that there has been swift rapprochement between Hamas, Hezbollah and Iran. The crowning move would be for Khaled Meshaal, head of Hamas’ political bureau, to visit Tehran for Hamas to completely return to the Axis of Resistance.

What is new in the relationship between Hamas and Hezbollah is what Hezbollah Secretary-General Hassan Nasrallah announced on TV on Jan. 15 regarding Hamas' having serious intentions to redress its relationship with Hezbollah and Iran. Nasrallah said this decision was a central one taken by the Hamas leadership locally and abroad, and that bilateral relations have come a long way.

Nasrallah’s tone in talking about Hamas left a positive impact on the movement, knowing that this reconciliatory discourse did not emerge overnight. It was rather the fruit of a series of meetings between Hamas and Hezbollah in Beirut, during which Hezbollah felt that Hamas was seriously willing to thaw out the frozen relations between the two over the Syrian issue. The coming days might hide other positive steps in favor of the rapprochement.

The increased rapprochement between Hamas and Hezbollah has given Hamas breathing space, allowing it to partly come out of the political isolation imposed on it in the past months, following the boycott with Egypt, the Qatari-Gulf reconciliation and pressure applied on Turkey for hosting Hamas officials.

Hamas quickly confirmed news of the rapprochement in a message attributed to Mohammed al-Deif, leader of Izz ad-Din al-Qassam Brigades, and addressed to Nasrallah. In the letter, Deif offered his condolences for the deaths of the Hezbollah leaders in Quneitra on Jan. 18. Moreover, Deif called on Nasrallah to direct his weapons toward Israel so that both parties could manage their coming battle united.

Al-Monitor noticed that Hamas’ condolences for Hezbollah in the wake of the Quneitra attack sparked contradictory reactions among the Hamas cadres on Facebook pages, as some supported this move, while others refused it.

A member of Hamas’ political bureau, Sami Khater, told Al-Monitor, “There is consensus between Hezbollah, Hamas and Iran, and we haven’t changed anything in our politics toward them. Our relations were never cut off, and Hamas always aims at maintaining good ties with Hezbollah and Iran to support the Palestinian cause.”

One of the effects of the tangible rapprochement between Hamas and Hezbollah was the confusion stirred by Meshaal’s statements about the Syrian opposition. He said he supported the Arab people for revolting to obtain their rights by using “peaceful methods.” Meshaal was making insinuations to the opposition’s militants in Syria.

The head of Hamas’ foreign relations, Bassem Naim, told Al-Monitor, “Hamas has paid a high price due to its ethical stance regarding the Syrian crisis.” He accused the Syrian opposition of failing to achieve anything for its people, other than destruction and homelessness, and he condemned the opposition’s attack against Meshaal by accusing him of being affiliated with the Iranian axis.

Deputy Chief of Hamas’ political bureau, Ismail Haniyeh, announced on Jan. 20 his unity with Hezbollah after the Israeli assassination, and he considered the incident a message reaffirming the need to reunite against Israel and to work on the same page.

A Lebanese official who contributed to the mediation between Hezbollah and Hamas told Al-Monitor, on condition of anonymity, “The party will be happy if Hamas joins it in any confrontation with Israel to respond to the recent assassination. This would bring Hamas back to the Iranian axis. Nevertheless, Hezbollah is well aware that there is no agreement among Hamas members to fight alongside the party in the next war, which might break out any minute.”

A prominent Hamas leader in Gaza, Mahmoud al-Zahar, who strongly espouses Hamas’ return to the Iranian axis, said on Jan. 25, “Hezbollah has enough power to fight Israel, but Gaza is supporting it with the means permitted to it.”

However, Naim told Al-Monitor, “The battle against the Israeli enemy is one and the same, regardless of the front. It does not need to be announced by any particular political party, but the decision to take part in the next battle or not depends on the nature of the field battle, not on a specific supportive or opposing political decision.”

“Gaza took part in the recent war. However, the West Bank did not make any moves, although Hamas wanted to flare up the situation at the time. The same applies to Hezbollah. The decision to join it in the confrontation against Israel is left to purely field considerations, and it does not mean that Gaza will automatically engage in any battle that breaks out in south Lebanon,” he said.

Amid this rapprochement between Hamas and Hezbollah, Hamas sources, on condition of anonymity in an interview with Al-Monitor, refused to confirm or deny the news that Hezbollah had turned down the movement’s request to move the headquarters of the military leader Saleh al-Arouri from Turkey to Beirut. These sources indicated that these were confidential military matters not to be leaked to the media.

Perhaps Hamas is benefiting from Nasrallah’s statements on the rapprochement to pressure some Arab countries, especially Saudi Arabia and Egypt, which do not want Hamas to return to the Iranian axis. This would reduce some of the pressure on the movement.

Naim told Al-Monitor, “Hamas’ relations with Qatar and Turkey will not be negatively affected if the movement keeps drawing closer to Iran and Hezbollah. Turkey and Qatar enjoy clear political leniency and understand well Hamas’ moves with Tehran and Beirut.” Naim refrained from naming other regional parties that do not understand this rapprochement.

Although Hamas is rushing into the Hezbollah-Iran axis, there are sources inside the movement advising its military and political leaders to slow down in mending the relations. These sources do not want Hamas to rush into an axis that does not have much to offer the movement.

Hamas members demanding a slowdown of the renewal of relations with the past allies believe that Iran is drowning in debt and economic crises, and that it does not have any funds to offer Hamas. Meanwhile, Hezbollah is up to its ears in the Syrian mess and might need Hamas to clean its slate in front of the Arab world more than Hamas might need Hezbollah’s military and arms assistance.