The fraught relations between Hezbollah and Hamas could come to an end as Israel continues its ground offensive in the Gaza Strip. 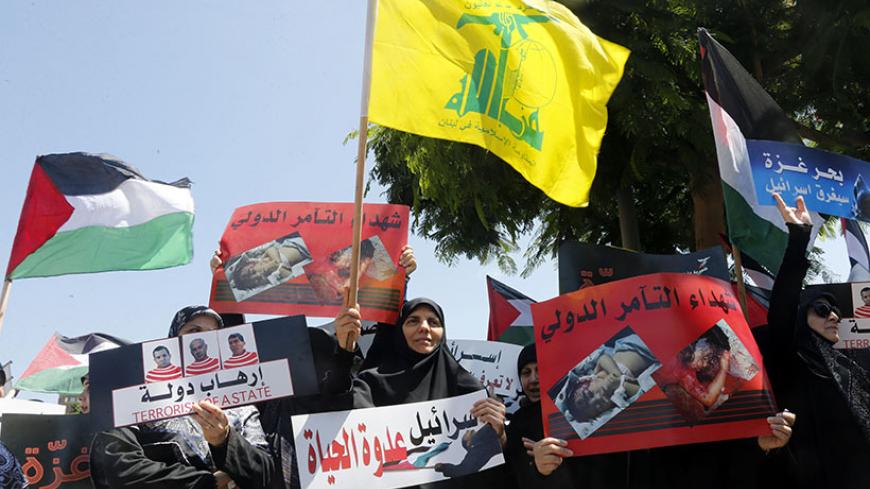 Despite the political differences that have emerged between Hezbollah and Hamas over their positions on the Syrian revolution in the last two years — which led to a break of ties between them and an exchange of political accusations — the military cooperation between the two groups has not ceased, due to it being institutionalized. The credit here goes to former Izz ad-Din al-Qassam Brigades leader Ahmed al-Jabari, who was killed by Israel during the 2012 war in the Gaza Strip. Jabari hailed from the Shajaiya quarter in Gaza, which has seen the most violent fighting in the recent conflict. The coverage of the current war in Gaza by Hezbollah-affiliated satellite channel Al-Manar has prominently displayed Jabari’s picture on the screen — hereby showing that Hezbollah is present in Hamas’ current struggle, which has grabbed the attention of the Arab street. Sources who spoke to Al-Monitor on condition of anonymity emphasize that Hamas and Hezbollah have maintained their military cooperation despite the break in their political relations.

The two groups’ political leaders have never enjoyed the same level of cooperation as their military wings. The president of Hamas’ political bureau, Khaled Meshaal, turned his back on the Assad-Khameini-Nasrallah axis after leaving Damascus. According to Hezbollah’s accusations, he was involved in the Muslim Brotherhood’s international project to overthrow the Syrian regime and put its national arm in power during the Arab Spring. During Hezbollah’s victorious battle in Qusair, the group corroborated its accusations against Hamas with documents demonstrating that Palestinian guerrilla organizations participated with Syrian opposition fighters in clashes with the Syrian military. Hamas fighters and fighters affiliated with Hamas used some of the combat techniques that it had acquired from Hezbollah against Hezbollah fighters participating in the conquest of the town. Likewise, according to Hezbollah’s reading of the battle, the machines that opposition fighters used to dig tunnels in Qusair had previously been given by Hezbollah to Hamas for the fortification of the Gaza Strip.

According to the same sources, within Hezbollah, the expressions "betrayal" and "lack of loyalty" are commonly used to describe Hamas’ position on the Syrian conflict. Nonetheless, the group has been careful not to let its poor relationship with Hamas damage its relations with the al-Qassam Brigades and Jabari’s heirs. Responsiveness within Hamas to Hezbollah has encouraged this approach and Hamas’ political bureau has embraced the al-Qassam Brigades’ maintenance of military cooperation with Hezbollah. The most prominent of those aiming to preserve the alliance are Mahmoud al-Zahar, a major historical figure in the political bureau, and Muhammad al-Fadl, who despite being disabled has retained his prestige as one of the al-Qassam Brigades’ historical leaders.

It should be noted that Hezbollah’s political leadership has attempted, throughout its break with Hamas, to preserve the ability to revive their strategic relationship. Hezbollah did not close the Hamas offices in Hezbollah’s stronghold in Dahiyeh, Beirut, which has been there for nearly two decades. Moreover, Hezbollah has not stopped providing financial support to Hamas’ Al-Quds TV station, which is broadcast into Palestine from one of Dahiyeh’s wealthier neighborhoods.

There has been material evidence that the dispute between the two groups’ political leadership over the Syrian war did not impede their military cooperation. In early 2010, an explosion in a Dahiyeh apartment was the result of a mistake made by members of Hamas who were being trained to assemble a car bomb by Hezbollah advisers.

About a month ago, the political and military wings of Hamas and Hezbollah began working toward the normalization of their political relationship. One instance of this move toward reconciliation was a meeting between the groups' political leaders. In the meeting Hamas was represented by its Lebanese political official Ali Baraka. That meeting represents the first such communication at that level between the political offices of the two groups since the initial breakdown of relations. Conditions seemed to favor the path to reconciliation for a few weeks before the outbreak of the Gaza war, which Hezbollah’s General-Secretary Hassan Nasrallah used as an excuse to make a call to Meshaal — which was subsequently leaked — in which he declared his support for Hamas in its battle. This call indicated political progress at the highest levels toward the normalization of political relations.

Hezbollah and Hamas do not deny the existence of a doctrinal contradiction (Sunni-Shiite) between the two parties, which has existed since the very beginning of their relationship but does not deeply affect their relations. In 1993, Israel expelled the most prominent members of Hamas from Gaza to Lebanon. Hezbollah welcomed them and erected a camp for them in Marj al-Zuhour. But Hezbollah was surprised to hear that Hamas’ exiles named their camp after Ibn Taymiyyah (1263-1328), the Wahhabi imam who declared the Shiite infidels in a famous fatwa that states, “Kill them even if they repent.” Nonetheless, until events began in Syria, the two groups coexisted despite their doctrinal differences. The extent of cooperation between their military wings played a role in creating a culture in both groups in which the benefits of cooperation in the shared fight with Israel trumps their many intellectual and political rivalries. There are also strategic interests that help maintain the groups’ relationship. Through its relationship with Hamas, Iran has gained a card to play in the Israeli-Palestinian conflict. Likewise, Hamas has used its relationship with Iran to break the Western and Arab/Islamic embargo imposed on the group in the 1990s and 2000s.

Some in Hezbollah believe that Hamas’ political bureau — which is part of the Muslim Brotherhood — found an opportunity in their comrades’ rise to power in Egypt in 2011 to gain autonomy from the Tehran axis, especially since Qatar pledged to replace Iranian funding. But the fall of the Egyptian Brotherhood and the floundering of the Syrian revolution put the brakes on this decision and forced Hamas’ political leadership to listen to the military wing’s opinion that the group should not break its alliance of common interest with Hezbollah.

These sources revealed to Al-Monitor that Meshaal recently examined the possibility of visiting Tehran, but the latter replied that the circumstances were not yet ready. Tehran contended that the Syrian regime is extremely sensitive to the hostility of the Brotherhood, Hamas included. But Iran did not conceal that its interest in maintaining influence in the Arab world forces it to leave its door to Hamas half open. Hezbollah engages in tactics that embody this perspective.

The same sources say that Hezbollah has information suggesting that Meshaal currently faces a dire need to relocate from Doha, as the Qataris house him in a remote residence in the capital and place "gentle" restraints on his activities. Meshaal has few options: Amman or Beirut would not withstand the weight of his presence, Egypt does not want him and Iran would be an embarrassing place for him as an Arab. Though Turkey remains the most appropriate location because of current circumstances, Meshaal would prefer to reside close to the Palestinian arena.

The reality is that the two groups are attempting to find options that would permit them to part ways. At various times, Iran and Hezbollah attempted to strengthen the fighting power of Islamic Jihad, the second-most powerful resistance group in Gaza after Hamas. But the intensity of that group’s characterization as an extension of Iran limited its political and popular appeal on the Palestinian street, despite the group’s great military capacity. Now, Iran and Hezbollah play the card of their relationship with Islamic Jihad to retain their influence over the decision to wage war or make peace in Gaza. But a source in Hezbollah told Al-Monitor that the decline of the relationship with Hamas has diminished Iran and Hezbollah’s role in Palestine. He indicates that some influence will still be exercised through the normalization now taking place at the political and military levels in Gaza. On the political level, Iranian influence depends on the pressure put on Hamas’ political leadership by the depth of coordination between its military wing and Hezbollah. Iran’s military influence is based on the intensity of cooperation between Hamas and Islamic Jihad in the field, which allows Islamic Jihad to exercise veto power in Tehran’s interest over Hamas’ political decisions about the war with Israel and the regional negotiations over that crisis.

Hezbollah sources say that the role of Tehran in the current Gaza war is weaker than in all previous conflicts. As the political initiatives for cease-fires move in other capitals — such as Doha, Riyadh, Ankara and Cairo — Tehran must now attempt to eavesdrop from afar and pursue a policy that proves its presence, rather than trying to guide events.