How will the PA face its declining popularity?

It remains to be seen whether the attitudes of Palestinians on managing the conflict with Israel and the increased popular support for the armed struggle push Hamas to encourage military resistance. 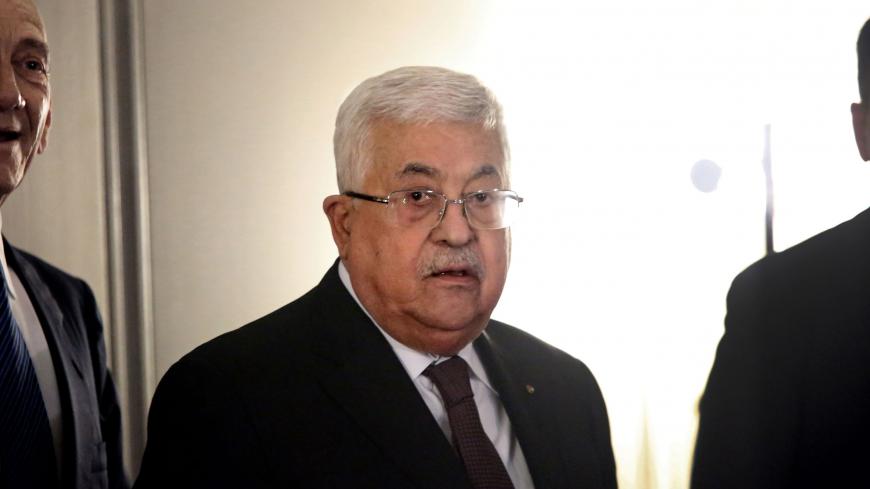 The Ramallah-based Palestinian Center for Policy and Survey Research (PCPSR) published Feb. 11 the results of its public opinion poll No. 75, showing a decline in support for the Palestinian Authority (PA) and President Mahmoud Abbas.

The poll, conducted to measure the response to the US announcement Jan. 28 of the peace plan known as the deal of the century, showed a Palestinian consensus against it.

Out of 1,270 Palestinian respondents — 830 from the West Bank and 440 from the Gaza Strip — two-thirds supported Abbas' position against the deal. Yet the poll also showed that between two-thirds and three-quarters do not trust Abbas’ intentions to execute his promises of severing ties with Israel and halting security coordination.

The results confirmed that support for the two-state solution is at its lowest level — less than 40% — since the signing of the Oslo Accord in 1993. Meanwhile, support for resorting to armed struggle at the expense of negotiations with Israel increased.

Walid Ladadwa, an official in the PCPSR’s survey research unit, told Al-Monitor, “The most surprising finding was the increase in the Palestinians’ lack of confidence in the PA and its ability to implement its threats against Israel in response to the US deal. This is why Abbas’ popularity declined significantly.”

The poll showed that 94% of respondents said they oppose the deal, while 65% confirmed their support for Abbas’ position against it. However, 68% believe that Abbas will not live up to his promises and will not stop security coordination with Israel. Therefore, 58% of the respondents said they were not satisfied with the response of the Palestinian leadership to the US deal.

Of note, Abbas has yet to use security coordination as a trump card against Israel even though he can, which fuels Palestinians' anger against him.

While 78% of respondents expressed their support for peaceful and popular demonstrations to oppose the deal of the century, 77% supported the cessation of security coordination with Israel, and 69% called for stopping the application of the Oslo agreement. Also, 64% called for resorting to armed action and return to an armed intifada, while 73% believed the PA will prevent armed action. This is what Abbas confirmed in his speech to the Arab League Feb. 1 in Cairo.

Ghassan Khatib, a former Palestinian minister of planning and head of the Jerusalem Media and Communication Center, said the poll confirms Palestinians agree with Abbas on rejecting the deal but lack confidence in his ability to implement his threats. He argued to Al-Monitor that Palestinians are aware of Abbas’ modest capabilities to confront Israel and the United States.

“There is a consensus between the public and the leadership on rejecting the deal, but responses varied when it comes to the capacity of this leadership to confront and thwart it,” he added. “I am not sure about the support for armed action. This could be linked to a temporary emotional impulse. This could subside with time, and respondents would return to preferring the peaceful popular resistance over armed struggle.”

The poll showed that “62% of the public want President Abbas to resign. … Demand for Abbas’ resignation stands at 52% in the West Bank and 78% in the Gaza Strip.” It revealed that the “level of satisfaction with the performance of President Abbas stands at 37% and dissatisfaction at 60%.”

What is more concerning is that only "33% think President Abbas is the best Fatah candidate for the presidency, while 43% think Fatah has better candidates.”

The poll showed that “if new presidential elections were held today and only two were nominated, Mahmoud Abbas and Ismail Haniyeh, the former would receive 44% and the latter 49% of the vote (compared to 49% for Abbas and 44% for Haniyeh two months ago).”

Wissam Afifa, director of Hamas' Al-Aqsa TV, commented to Al-Monitor on the results of the poll: “These findings encourage Hamas to step up and lead the Palestinian political scene to fill the void resulting from the declining role of the PA. Therefore, in light of the results of the poll, Hamas appears more willing to expand its internal and external alliances.”

He continued, “The results of the poll confirm the credibility of Hamas’ political and military orientations of igniting an armed uprising in the West Bank and opening a confrontation front with Israel in it. But Hamas is convinced that this front will only blow up in Israel’s face if Fatah gets involved. This confirms Hamas’ keen desire to run in the legislative and presidential elections. The movement is sure it will score a win in the upcoming elections.”

Moreover, the results of the poll confirmed that the Palestinians are on the verge of major political change. The poll highlighted a discontent toward the PA's performance, demands for Abbas’ resignation, lack of confidence in his policies and increased support for armed resistance, which could open up the Palestinian arena to unexpected developments.

For Jehad Harb, a politics and governance affairs researcher, the recent poll results indicate the rise of Palestinian support for armed struggle against Israel, although not by a broad majority.

He explained to Al-Monitor that the results open Hamas’ appetite for more armed attacks, despite the ensuing large cost. “Hamas needs to prepare the Palestinian public opinion on the use of arms, which are not available in the West Bank. Popular resistance is gaining more popularity among the Palestinians, even if such resistance is not yet manifested on the ground,” Harb said, asserting that the PA leadership does not encourage popular "[armed] resistance.”

It is clear that the results of the poll show a general Palestinian public understanding that the PA is battling serious confusion and is unable to make the right decision.

Of note, the PA does not seem to take such polls into account when making its decisions and setting its policies, as such polls may be deemed fabricated and politically oriented. At best, it does not see them as necessary, because it manages its policies according to the individual orientations of its president and his entourage, without taking into account Palestinian public opinion trends. This further widens the gap between the PA and the Palestinian public.