It seems that the Hamas leadership did not order rocket fire on Tel Aviv, but this does not diminish the embarrassment and stress caused to Prime Minister Benjamin Netanyahu, right before the elections. 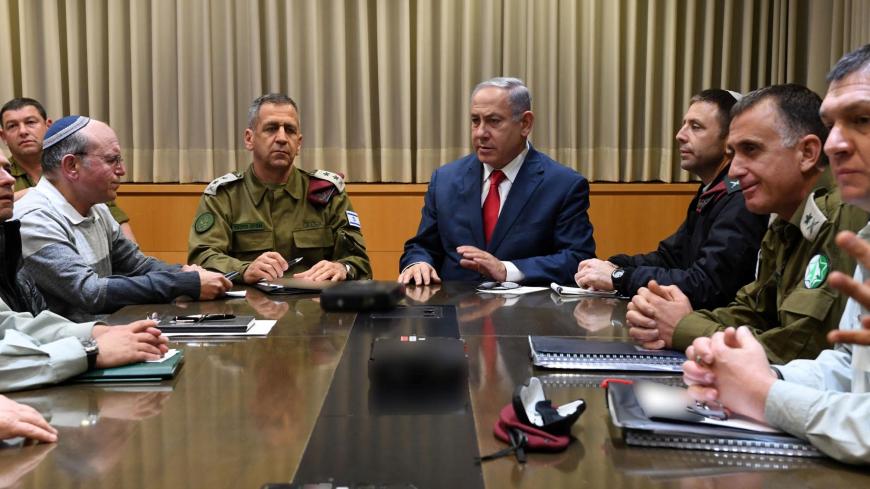 On the evening of March 14, sirens went off throughout the Tel Aviv metro area, shattering the calm indifference of Israel’s secular hub. At first, residents were convinced it was a mistake. Sirens? In Tel Aviv? Most people out on the street did not follow standing instructions to run for cover into a nearby building, a shelter or concrete-enforced safe room that all newer Israeli homes are supposed to have. Tel Avivians have not heard such sirens since the war with the Gaza Strip in the summer of 2014, unlike residents of the southern town of Sderot and neighboring kibbutzim on the Gaza border where alarms go off periodically alerting them to incoming rockets.

Several loud explosions reverberated throughout the area soon after the clamoring alarm, and hundreds of thousands of Israelis suddenly realized this was no mistake. It took the chief military spokesman, Lt. Gen. Ronen Manelis, an embarrassingly long time to announce that rockets had indeed been fired at Tel Aviv, to concede they had taken the army by surprise and to say that the authorities were “trying to understand” who was behind the attack. They were busy all night doing just that.

A recent military assessment expressed concern about an escalation with Gaza, especially ahead of Israel’s April 9 elections, but no one believed Hamas would dare fire rockets or allow some local militia to do so. Such attacks are a “doomsday weapon” Hamas reserves for critical times of an all-out war with Israel. Thursday was not such a critical moment; it was more like a mishap-default reaction. Qatar’s latest cash installment had reached the Gaza Strip March 11 after a lengthy delay. A senior Egyptian delegation was in Gaza on an ongoing mission to mediate a long-term truce between Hamas and Israel. And then two long-range M-75 rockets rose into the sky and headed north toward Israel’s biggest metropolis.

The rockets did not explode near any civilians and did not result in casualties. The explosions, however, were heard loud and clear shocking Israelis less than a month before they go to the ballot box. Most shocked was Prime Minister and Defense Minister Benjamin Netanyahu. A rocket attack on Tel Aviv was the last thing he needed as he is waging a bitter campaign to restore to his Likud Party the votes it lost to smaller right-wing parties in order to ensure its election victory. Gaza is a major sore on Netanyahu’s soft underbelly, with right-wing voters viewing his government’s policy as capitulation to Hamas. Rockets directed at Tel Aviv, Netanyahu knows, forces him to retaliate forcefully, which could in turn result in a forceful Hamas reaction. This would invariably result in a powerful Islamic Jihad attack, because the group is also vying for the hearts and minds of Gaza’s 2 million Palestinians, and this in turn would require Israel to raise the bar further. Netanyahu would be faced with an escalation, which could veer out of control on the eve of the elections. In other words, a potential catastrophe. Netanyahu has built up an image as the ultimate “Mr. Security” in recent years, and the rockets could shatter it at a critical point in time.

Israel was quick to announce that it views Hamas as directly responsible. Hamas and Islamic Jihad are the only groups in the Gaza Strip with long-range rockets in their arsenals. At the same time, Hamas was quick to deny any role in the attack, and Islamic Jihad followed suit. Both organizations understand the implications of an attack on Tel Aviv. Hamas rushed to evacuate its positions and outposts. Israel asked the Egyptian delegation to leave Gaza immediately, all the while trying to understand whether Hamas had authorized the attack, and if so, what made it up the ante and go for broke at such a crucial time.

Following the attack, the Israeli air force bombed overnight some 100 Gaza targets. Fighter jets, choppers and drones pounded the Gaza Strip, striking the central Hamas headquarters in Gaza City’s upscale Rimal neighborhood, among other targets. Rimal is home to senior Hamas leaders and Israel targets it whenever it wants to wind up a round of violence with Gaza. Hamas gets the hint and things generally calm down. On Friday morning, the question was whether all sides had had enough.

The Israeli strikes were widespread and included “quality” targets: The Hamas headquarters from where, according to Israel, the group directed anti-Israel terror attacks in the West Bank. Also bombed and destroyed were an underground rocket-manufacturing plant and additional outposts including one used by Hamas' naval force, which Israel had been eyeing for quite some time.

Netanyahu faces two problems. First, Israel’s response proved once again that the lives of Israelis living on the Gaza border were of less account than the well-being of Tel Aviv area residents some 50 miles to the north. While Israel retaliates after most rocket attacks in the south, the minister of defense only bothered to order a full-scale bombing of Gaza when sirens blared in Tel Aviv. At the same time, Netanyahu knows that the nighttime raids would hardly satisfy public anger at the ongoing violence from Gaza or moderate right-wing criticism. If he were head of the Knesset opposition, Netanyahu would have been making mincemeat out of the prime minister and defense minister. He would have accused them of weakening Israel’s powers of deterrence, lamented the gall of those cheeky Hamas people and Israel’s approval of the Qatari funding propping them up and being used for terror activity. Netanyahu’s problem, of course, is that he himself holds both top jobs.

Yet another event went largely unnoticed several hours before the rocket launches: Gaza residents took to the streets in two large demonstrations against the “cost of living,” with protesters chanting slogans against Hamas and the disastrous economic situation in the Gaza Strip. Hamas was caught unprepared for this rare popular protest, and it reacted with force, with a large-scale deployment shooting in the air to disperse the demonstrators. The protests indicate that the ground is shaking under the feet of the movement that has been running Gaza with an iron fist for over a decade, with popular support eroding in light of the ongoing humanitarian crisis there. A senior Israeli military source told Al-Monitor following the attack on Tel Aviv that this could be why Hamas decided to gamble on Thursday night. As always, whenever leaders of the organization or Arab leaders find themselves in trouble at home, they try to shift the blame to Israel.

Early Friday morning, the picture became clearer. The Israel Defense Forces assessed that the rocket fire was a mistake. The two rockets were fired at 9:17 p.m. These were M-75 rockets, launched from Hamas launching batteries. Exactly at the same time on Thursday evening, representatives of the Egyptian intelligence convened with heads of Hamas and Islamic Jihad discussing the arrangement with Israel. An Israeli security source told Al-Monitor that according to Israel’s intelligence, the rocket launch was not decided or approved by Hamas seniors.

All that is left now is to count on Netanyahu to handle the embarrassment, and to make every possible effort to avoid an escalation that could lead to war.