Prime Minister Benjamin Netanyahu has quietly made a number of significant concessions to Hamas to buy some quiet until the March 2 elections in Israel. 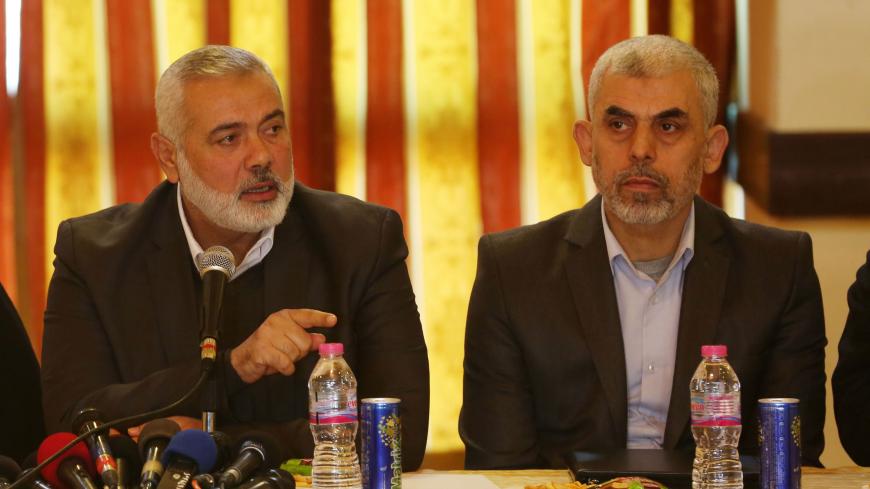 Yahya Sinwar (R), leader of the Hamas in Gaza, and the movement's political bureau chief, Ismail Haniyeh, meet with the heads of families in Gaza City, Gaza, Dec. 26, 2017.

Israel Defense Forces chief of staff Lt. Gen. Aviv Kochavi is known to be more gung-ho about engaging Hamas than his predecessor, Gadi Eizenkot, was. In addition, Israel’s new defense minister, Naftali Bennett, is aggressive and outspoken on the issue. Yet, ironically, Israel has embarked on an unprecedented honeymoon with Hamas, which has controlled the Gaza Strip for almost 13 years, since 2007. Prime Minister Benjamin Netanyahu, who has made a career out of issuing hollow threats against the organization and Gaza, now appears to be in love with Hamas political chief Ismail Haniyeh, while Bennett strolls into the sunset arm-in-arm with Hamas' Gaza chief, Yahya Sinwar.

The relief measures Israel has granted Hamas in recent weeks are unprecedented and the most comprehensive since Hamas kicked the Palestinian Authority out of Gaza and took control of the enclave. Even though on Feb. 11 the prime minister promised Hamas the “surprise of its life,” and on Feb. 18 the defense minister warned of a “painful spring” ahead for the group, Israel has been relaxing a growing number of significant restrictions it had placed on the organization, signifying what has been clear for months: Sinwar is once again the victor. He has proved that Israel only understands force and that the Netanyahu government does not have a real solution concerning Gaza as long as its strategic interest lies in preserving Hamas' rule and avoiding Palestinian unification at all cost.

Of course, this could all change in an instant if an artillery shell or rocket lands in the wrong place at the wrong time. For the moment, however, the honeymoon remains on track, and the odd couple is getting to know each other and becoming really tight. Despite the harsh opposition of Shin Bet, but with the consistent backing of the military, Israel is dramatically increasing the number of Palestinians from Gaza being allowed to work in the country. This is a purely strategic move. Until recently, Israel had objected to the entry of laborers, instead only supplying VIP entry permits to traders and other well-connected Gaza residents. Publicly, Israel continues to insist that only Palestinian “merchants” are being allowed in, but this is a fraudulent claim. Gaza does not have thousands of traders.

“Bit by bit, without anyone noticing, we are allowing thousands of Gazans to work in Israel,” a senior Israeli security source told Al-Monitor, speaking on the condition of anonymity. “We have to understand that there are hundreds of thousands of families in Gaza that have no way of making a living, and when we let 7,000 laborers work in Israel every day, we are putting food in the mouths of some 70,000 hungry people.”

In addition to issuing work permits, Israel has given its permission to import cement into Gaza without strict monitoring, approved delivery of heavy engineering tools and many other goods, and expanded the fishing zone to 15 nautical miles. Israel has also been buying a considerable amount of fruits and vegetables from Gaza growers in recent months. Generally speaking, the lagging Gaza economy is getting a boost, so Sinwar is able to provide his people with a modicum of hope for the first time due to the determined stand he chose to take. He was undeterred by Israeli threats, refused to blink, and continued to exert military pressure on Israel using various means until it understood that letting go a little was preferable to sinking into the Gaza quagmire. Israel is avoiding a military offensive against Gaza for three cumulative reasons.

“Netanyahu will not risk a military move before the elections,” a senior Likud source told Al-Monitor on the condition of anonymity. “We can easily go into Gaza, but it would be very difficult to get out safely.”

Israel also has a diplomatic-strategic interest in avoiding an offensive. “Hamas has turned from being an enemy of Netanyahu into a sort of distant relative,” a former senior military official who requested anonymity told Al-Monitor. “The prime minister knows that if the Hamas regime is toppled, and the Palestinian Authority (PA) returns to Gaza, pressure will grow on Israel to conduct true negotiations with the Palestinians, and that is the last thing in the world that Netanyahu wants to happen.”

Israel's northern front also is also providing a deterrent. “Netanyahu has managed to convince Bennett that it is far more important to continue battling the Iranian entrenchment in Syria and pushing ahead with the ‘war between the wars,’” said a senior Israeli security official speaking on the condition of anonymity. “It is a matter of proportions. Hamas does not constitute an existential or immediate threat. Iran does.”

A rumor making the rounds in recent weeks has it that Israel, in a signaling of its intentions, planned to assassinate a Hamas leader in Gaza. Sinwar was among those mentioned as a possible target, and indeed, he appeared to go underground, hardly being seen in public. According to Arabic-language media reports, Israel itself encouraged the rumor, with its veracity being bolstered by aggressive declarations by Bennett. Israel is officially ignoring the rumor, but the move was clearly significant in terms of pushing the two sides into each other’s arms, for now.

Barring unexpected developments in the coming days, Netanyahu will get what he needs most of all: relative calm on the Gaza front until the March 2 elections, without blaring warning sirens and photos similar to those taken during the prime minister’s panicked evacuation last year from an election rally in the town of Ashdod. But then what? There is no knowing.

Netanyahu is currently most interested in his own personal fate, which is in limbo. If it were up to him, Israel and Hamas would progress from their partial, current arrangement to a long-term full-fledged deal. The problem with the current state of affairs is that it fails to address Israel’s demand that Hamas return the bodies of two soldiers, Lt. Hadar Goldin and Sgt. Oron Shaul, who were killed in fighting in 2014, and release Israeli civilians (alive or dead) believed to be in Gaza. That is why Israel is not making any mention of a long-term deal or of its contacts with Hamas or publicly acknowledging the series of dramatic concessions and relief it has provided the organization.

“This is not an arrangement, it is a con job,” Lt. Gen. (res.) Gabi Ashkenazi, a former army chief, told Al-Monitor. Currently number four on the leadership roster of the opposition Blue and White, he added, “Netanyahu does not want the public to know that he is engaging in moves with Hamas without bringing our boys home. We will not allow that to happen on our watch.”

On March 3, we will know whether his pledge becomes relevant.