Hamas officials denied that Prime Minister Ismail Haniyeh sent a secret message to his Israeli counterpart, but debate continues within the movement about a dialogue with Israel. 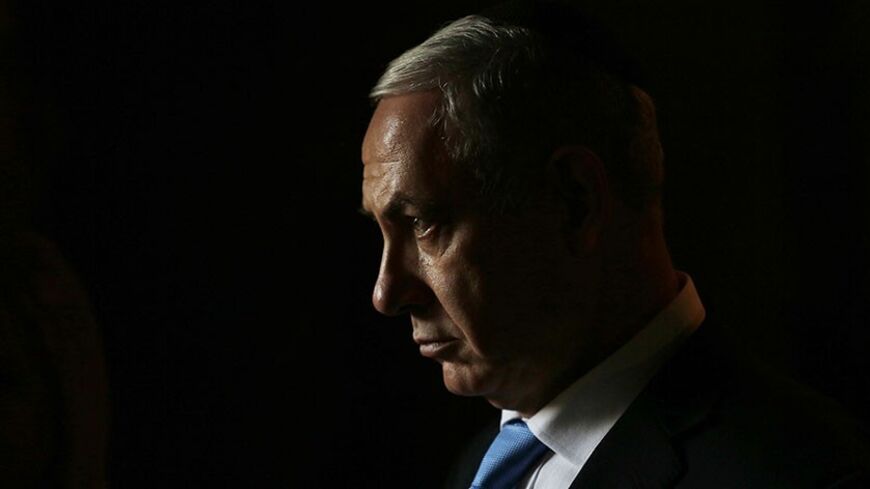 Israel's Prime Minister Benjamin Netanyahu leaves after attending a ceremony at the Hall of Remembrance in Jerusalem, Jan. 21, 2014. - REUTERS/Baz Ratner

Palestinians woke on Feb. 18 to an unusual news report posted on an Israeli website, alleging that Ismail Haniyeh, prime minister of Hamas’ Gaza government, had secretly sent a message to his Israeli counterpart, Benjamin Netanyahu, about ending the military escalation following Israel’s recent bombardment of a number of targets in Gaza.

It was further alleged that the message was passed in a phone conversation between Ghazi Hamad, undersecretary of the Ministry of Foreign Affairs in Gaza, and an Israeli mediator, Gershon Baskin. The conversation was said to have included a request to wind down Israeli military operations and supposedly took place in Haniyeh’s presence, in his office, with the message subsequently being relayed to Gil Sheffer, Netanyahu’s bureau chief.

Al-Monitor published an article by Baskin in October 2013 in which he talked about serving as a conduit between Hamas and Israel on numerous occasions as a result of his close relations with senior Israeli government officials. Haniyeh’s office, through its spokesman, Taher al-Nono, vehemently denies sending a message to Netanyahu, describing the allegations as false, baseless and fabricated by the Israelis. Nono further accused Israel of waging psychological warfare against the Palestinian population of Gaza.

In a private meeting with Al-Monitor, Hamad also denied conducting negotiations between Haniyeh and Netanyahu. According to him, Hamas’ communications concerning Gaza only take place through Egyptian channels, “through which we express our views about any Israeli positions. We are not in direct negotiations with any Israeli party, and there is no written or verbal correspondence between us and Israel.”

When asked about the nature of the contacts in general, Hamad replied that the communications deal with living and economic conditions, as well as the movement of commercial goods and businesspeople. All contact with Baskin had revolved around negotiations for the 2011 prisoner exchange deal between Hamas and Israel involving Gilad Shalit. Baskin was used as the go-between because he did not represent any official Israeli entity. No face-to-face meetings ever occurred. Hamad told Al-Monitor that he had met with Haniyeh on the day after the Israeli news report, and they both laughed because it said that Haniyeh was sitting next to Hamad when he placed the phone call to Baskin.

In this regard, a senior Hamas official living outside the Palestinian territories told Al-Monitor that the movement had nothing to hide that necessitated its being conveyed in secret to Israel. He confirmed the existence of indirect channels of communication between Gaza and Israel to discuss humanitarian issues, such as the transport of goods and sick people, similar to that conducted by the Ministry of Civil Affairs in the West Bank.

Nevertheless, this piece of news begs the following question: Is Hamas’ denial and Israel’s silence about the alleged contact indicative of their perhaps never sitting down at the same table to negotiate, as has occurred with Israel and Fatah?

Perhaps the clearest standpoint in this regard comes from the movement’s leader in the West Bank, Mahmoud al-Ramhi. During an interview in late 2012, he said, “If Israel desires to live in peace in the Middle East, it must enter into dialogue with Hamas, for the latter is the gateway to political Islam.” This led to Fawzi Barhoum, Hamas’ spokesman in Gaza, categorically rejecting negotiations with Israel, as a result of its killing, assassinations, invasions, incursions and siege imposed on the Palestinian people.

Al-Monitor met with a prominent Palestinian figure in Gaza, who has succeeded in passing messages between Hamas and Western countries. He said that there were a lot of reasons that dialogue between Hamas and Israel could be a possibility in the long term. Most important among them was the movement’s influence in Gaza, its ability to control the security situation there, the expansion of its popularity to the West Bank — despite the harassment it is subjected to by the Palestinian Authority and Israel — as well as the weakness of its adversary, Fatah, as a result of the rivalries that have befallen its ranks.

This same figure, who requested anonymity to ensure continuing in his special duties, added that despite everything, Hamas, in Israel’s view, is and will continue to be an enemy and a belligerent movement. Israel knows well that the movement will never change its DNA, yet dialogue in such situations is always conducted between enemies and not friends.

The latest war on Gaza, in November 2012, brought about an unprecedented and strange relationship between Israel’s Channel Two and Hamas’ Al-Aqsa satellite channel, which included a bilingual and live on-the-air exchange of information about the situation in Gaza, in Arabic and in Hebrew. Subsequently, Israel and Hamas held a rare conversation via Twitter, in October 2013, when Peter Lerner, the Israeli military foreign press spokesman, tweeted and received a reply from the Izz ad-Din al-Qassam Brigades’ spokesman.

In the course of preparing for this article, Al-Monitor read an internal Hamas memo stating that negotiations with Israel are not prohibited by Sharia or logic. Rather, negotiations are a tactical tool to be utilized as the conflict demands and as part of an overall vision and set of rules and restraints in regard to Israel. It further described negotiating with Israel as the wrong choice at the moment.

The memo, circulated among the Hamas leadership in April 2013, seems to affirm that the movement had refused to enter into direct negotiations with Israel, revealing that it had received offers to sit with Israeli government officials and peace advocates. It apparently declined because the balance of power was unsuitable and favored Israel. That Israel has refused to withdraw from occupied lands and to recognize Palestinian rights makes any negotiations futile and risky as long as these circumstances continue, according to the memo.

Will the future bring direct dialogue between Hamas and Israel? In his interview with Al-Monitor, Hamad, one of Hamas’ most open-minded figures, gave the following diplomatic and non-committal answer: “At this stage, Hamas has taken a clear decision not to directly communicate with the Israelis. But, I cannot ascertain what future political developments might bring. Upcoming political circumstances will determine future events, and it is premature to talk about any direct contacts of this kind at this stage.”