According to Hamas sources, the Islamist movement sent an indirect message to Prime Minister Benjamin Netanyahu, and not for the first time. 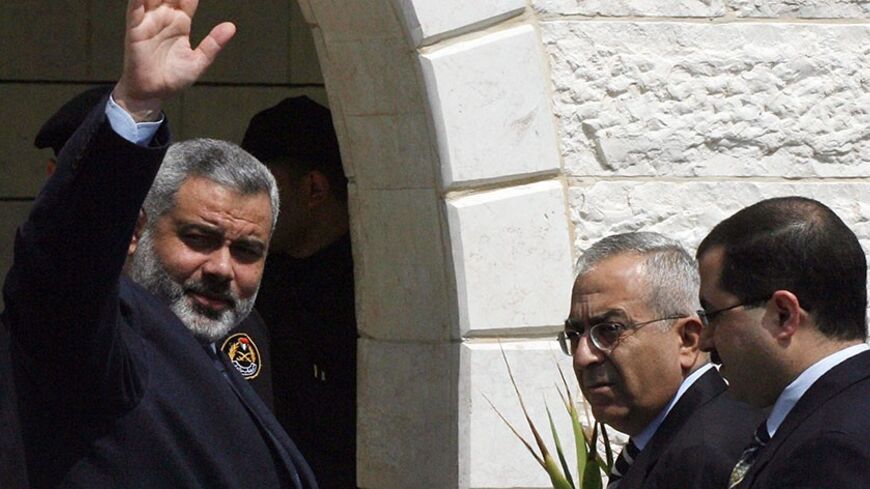 GAZA CITY, Gaza Strip — Hamas’ leadership quickly denied to Al-Monitor on Feb. 24 that Gaza Prime Minister Ismail Haniyeh had sent a letter to the office of Israeli Prime Minister Benjamin Netanyahu regarding the confrontations on the Gaza-Israel front. Hamas issued the denial to avoid being accused of hypocrisy, given Hamas regularly criticizes its rival Fatah for communicating with Israel.

Despite Hamas’ official denial about the existence of any direct communication channels with Israel, a source in Hamas asserted that the organization has sent a verbal message to the Israeli side — from the deputy foreign minister in the Hamas government Ghazi Hamad to Israeli peace activist Gershon Baskin — without explicitly asking Baskin to forward the message to Netanyahu’s office.

“Yes, a message was sent to the Israeli side, and it was kind of a [verbal] chat about what is happening lately on the border regarding rocket fire from Gaza, the Israeli responses and Hamas’ position on the matter. It noted that Hamas may lose all control of the factions if Israel continues to target the [Gaza] Strip,” said the source, speaking to Al-Monitor on condition of anonymity.

Al-Monitor tried to get a comment from Baskin, but he refused and only said, “It’s better if I stay away from statements on this matter.”

The source pointed out that the message passed by Baskin was not the first. There had been communications with Baskin regarding various matters, particularly those relating to the blockade and to facilitating the entry of goods to the Gaza Strip, the source noted.

Al-Monitor has previously reported that contacts between Hamas and the Israeli government have also been facilitated by Palestinian business leaders.

Hamas strives to show that it doesn’t communicate with Israel and that its relationship with it is based on only military confrontation, which was why Hamas achieved great popularity among Palestinians and Arabs.

Bassem Naim, the foreign relations adviser to the Gaza prime minister, explained that Hamas opposes negotiating with Israel, not based on ideological or religious grounds but for political considerations because the current power balance does not allow the movement to negotiate with Israel.

“There are field communications with Israel regarding the daily affairs of Palestinian institutions that are affiliated with the government in Gaza, to facilitate the transport of goods and solve various problems that arise,” Naim told Al-Monitor.

The same source said that when Hamas’ political bureau head Khaled Meshaal visited the Gaza Strip in late 2012, he said in a closed-door meeting with a number of writers and intellectuals that his movement had received an indirect offer from former US President Jimmy Carter via Eli Yishai — when the latter was Ehud Olmert’s deputy prime minister — about directly negotiating with Israel, but that the Israeli offer was not at a level that would have allowed Hamas to agree to it.

Hamas has openly negotiated with Israel in the past, but only through intermediaries — such as for the release of Israeli soldier Gilad Shalit in exchange for releasing Palestinian prisoners in 2011, and also regarding cease-fires and returning the calm between the two sides.

Hamas refuses to recognize Israel and its right to exist on the historical land of Palestine and also opposes the PLO’s recognition of Israel. But Hamas participated in the 2006 parliamentary election of the Palestinian Authority, which was established by the Oslo Accords between the PLO and Israel.

Hamas has often given the green light to its political rival Fatah, headed by President Mahmoud Abbas, to continue negotiating with Israel on condition of holding any agreement to a referendum by Palestinians at home and abroad. However, when the agreements fail to become implemented, Hamas removes the green light.

Hamas insists that Egypt — through its intelligence service — is the mediator in the relationship with Israel, and Hamas uses that channel only to convey messages about Israeli violations.

On Feb. 24, Gaza’s Deputy Prime Minister Ziad al-Zaza said in a meeting with a group of journalists in the Gaza Strip attended by Al-Monitor, “We are recording all the Israeli violations in the Gaza Strip and passing them on to the Egyptian mediator, which is the sponsor of the truce agreement reached last year after Operation Pillar of Defense, as the Israeli side tries to score points.”

Another reason why Hamas avoids direct negotiations with Israel is to not anger Egypt, which has acted as a mediator and is keen to retain its influence in this arena, according to the Hamas source.

Political writer Mustafa Ibrahim told Al-Monitor, “Many countries, including Egypt, don’t want direct contact between Hamas and Israel so that pressure on Israel is effective. And those countries can't do without [contacts with Israel]. Hamas doesn’t like to reveal [the contacts] to protect its popularity, which is due to [Hamas] rejecting a political settlement.”

Hamas may not seem in a hurry to establish direct contacts with Israel, but the persistent pressure and the political isolation, especially after the fall of the Muslim Brotherhood in Egypt, the repeated Israeli threats to launch a new war against the Gaza Strip and the current negotiations between the Palestinian Authority and Israel is making Hamas search for solutions and send indirect messages to different parties, including Israel.