In a new book, Israeli academic Gershon Baskin reveals the back channel he established with Hamas that led to the release of the Israeli soldier Gilad Shalit. 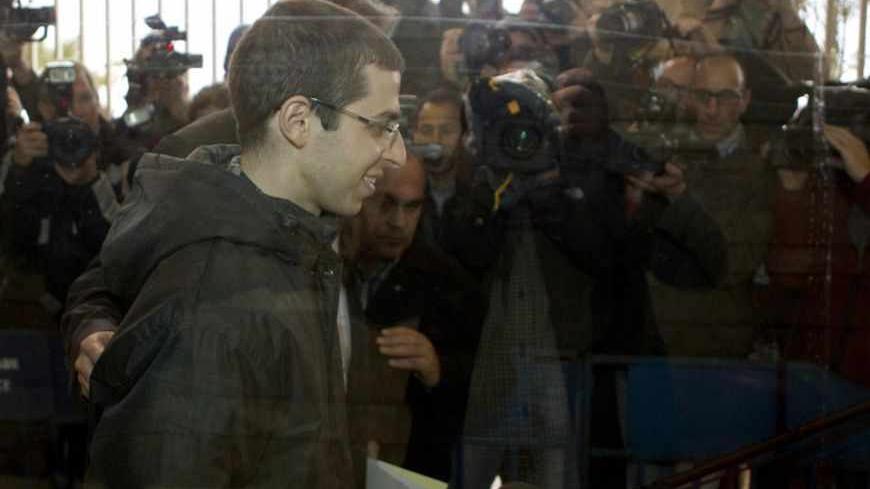 “It is the greatest thing I have done in my entire life. I have no doubt about that,” wrote Baskin at the beginning of his book. And, indeed, he did it against all odds and despite the heavy dose of skepticism and ridicule from those who led the negotiations on behalf of the government except for one person — former Mossad agent David Meidan, who was able to recognize the benefit a person like Baskin could provide and worked with him until the moment that abducted soldier Gilad Shalit stepped foot on Israeli soil, on Oct. 18, 2011. “Thank you for being an insufferable nag,” Meidan wrote in a thank you letter sent to him after the deal was done.

Gershon Baskin succeeded where others had failed. He was able to open a secret back channel with Hamas and brought Shalit's captivity to a happy ending, after five years and four months, in exchange for 1,000 Palestinian prisoners.

I met Gershon Baskin for the first time in 2009, about two-and-a-half years before they signed off on the deal. We spoke in his office in Jerusalem at the Israel Palestine Center for Research and Information, a joint Israeli-Palestinian public policy think tank dedicated to promoting the "two states for two peoples" solution. There he told me about the relationship he had established with Ghazi Hamad, former aide to Gaza Prime Minister Ismail Haniyeh, and the hard work he was investing to free Gilad.

Truth be told, I thought he was naïve. I simply could not comprehend how a left-winger from Jerusalem could do it. I did not believe that the cooperation with Hamad, who at the time was not particularly influential in Hamas, would lead to a positive result.

I was wrong. The two “outsiders,” Baskin and Hamad, were able to establish a direct channel of communication between them and proved that not only was it possible to start a dialogue between Hamas and Israel, it was also possible to reach understandings, agree on them and even implement them.

In Freeing Gilad, Baskin relates how his relationship with Hamas representatives began. At the end of April 2006, even before the Shalit's abduction, Baskin was in Cairo for a UN seminar on promoting peace in the Middle East. A Palestinian friend from Gaza introduced him to Mohammed Megdad, a professor of economics at the Islamic University of Gaza.

“It turned out,” wrote Baskin, “that Megdad, a Hamas member, travelled from Gaza to Cairo after hearing that Israelis would also be participating in the seminar. He wanted to meet someone like that, because up until that time, he had never spoken to anyone Jewish or Israeli.”

His acquaintance with Megdad later led him to meet Ghazi Hamad, who was then the spokesperson for Prime Minister Haniyeh, and then to a true friendship that brought about the establishment of a channel of communication of unprecedented importance between the parties.

The two set aside honor issues and got down to business, without mediators, without any third parties. It is important to recognize, however, that this channel would not have become active had Meidan not been put in charge of the negotiations. Meidan accepted the challenge that Haggai Hadas and Ofer Dekel, his predecessors as mediators, had refused. According to Baskin, they constantly told him things along the lines of “Move out of the way, you’re only interfering.”

In the book, Baskin reveals his fascinating correspondence with Hamad over the years. Their exchanges not only related to the negotiations and Shalit’s release, but also understandings for cease-fires between the two sides. This was the case, for example, in the flare up of violence that began in summer 2011.

During what then appeared to be progress toward completing the Shalit deal, terrorists who had penetrated the border through Sinai reached Highway 12, which runs from Eilat to Mitzpe Ramon. They fired at an Egged bus and killed eight Israelis. In response, the Israel Defense Forces (IDF) began an air assault on the Gaza Strip. In one of the raids, six operatives of the armed Popular Resistance Committees (PRC), including their leader, Kamal al-Nairab, were killed. While the air assault was in process, a volley of rockets began landing on towns in southern Israel. Segments about those incidents from Baskin’s book follow:

“Good morning, Ghazi. It looks like the government will be deciding this morning how hard to hit Hamas — I’m pushing for a ceasefire?”

“The prime minister (Haniyeh) and [then Hamas military chief] Jabari (Ahmed Jabari) ordered everyone to hold their fire, but Israel continues to attack. We are doing everything we can. Hamas is not firing at all, and Jabari also wants a ceasefire. You have to convince them to let us stop the shooting here” [referring to the shooting by all the other groups].

At 3:21 p.m., [former] Minister [of Improvement of Government Services] Michael Eitan called me and said:

“Four rockets just hit [the southern city of] Ofakim. The prime minister [Benjamin Netanyahu] wants to know where the ceasefire is now?”

“I called Ghazi and asked him why more missiles were landing, he was in the prime minister’s office and Ahmed Jabari along with the leaders of all of the factions were there as well. He told me that Jabari wants to send his forces to the seam line and all of the launch areas in order to enforce the ceasefire, but they are afraid the IDF will open fire.”

Baskin conveyed the message to David Meidan and got an answer within 10 minutes: “Tell Hamas that they can deploy their forces in the field and that the IDF won’t hit them if they stop the rockets.”

“And that’s what happened.”

Gershon Baskin’s biggest and most important accomplishment, however, was the release of Gilad Shalit and the successful completion of the deal in which 1,000 Palestinian prisoners were also released.

The launch party for the book, held at Mishkenot Sha’ananim in Jerusalem on June 6, was attended by Shalit and his family as well as Meidan, the envoy who dared to size up Baskin and see more than a “professional nag,” as Baskin calls himself. It was a modest celebration of freedom.

Baskin said in an interview with Israeli media that the biggest problem he had was convincing the Israeli leadership to talk directly with Hamas. After all, back then nobody believed there was anyone to talk to or things to discuss. The language of power was the only language of communication between Gaza and Israel. In fact, even today — almost two years since Gilad Shalit’s release — there are those who still believe this. Gershon Baskin and Ghazi Hamad proved otherwise and were perhaps able to open a new page — not white, not smooth, but new — between Israel and Hamas.

At the end of the book, Gilad Shalit, the soldier released from Hamas captivity after five years and four months, offers a dedication to the man who did not give up.

Since my release, the concept of freedom has so much meaning in my life. Each day I learn all over again to value the privilege I have of being a free man. … Since my release, I have learned about “seeing the glass half full” in life, in other words, trying to always think positive and know how to value the fact that I am healthy and free.