Israeli plans for industrial zones in the Gaza envelope are attracting international support and local hope that they will create thousands of jobs for Palestinians, though not everyone is on board yet. 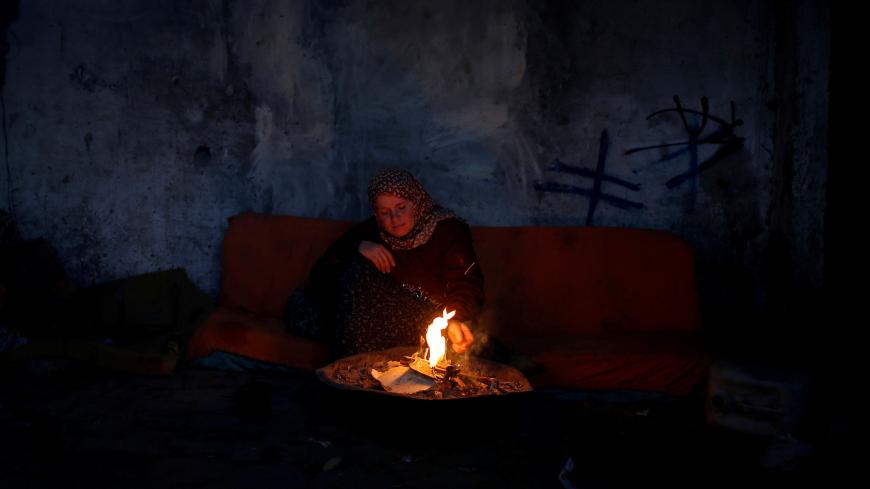 A Palestinian woman warms herself by a fire inside her house on a winter day in the northern Gaza Strip, Jan. 31, 2018. - REUTERS/Mohammed Salem

As calls grow to improve the dire living conditions in the Gaza Strip, Israel reportedly is quietly planning to set up three industrial zones along its Gaza border that could employ thousands of Palestinians and help ease the threat of terrorism that rises from poverty and oppression.

Matan Tsuri, a security affairs correspondent for Yedioth Ahronoth, revealed Nov. 29 Israel's big plans for what the news site called "anti-terrorist factories." Two of the industrial zones are to be built on 2,000-dunam (almost 500-acre) plots of land, while the third will be developed on 1,500 dunams. In mid-November, some big European banks and companies, along with US Ambassador to Israel David Friedman, were briefed about the plan and said they are interested in it, Tsuri said.

He noted that Eshkol Regional Council Mayor Gadi Yarkoni and Sha'ar Hanegev Regional Council Mayor Ofir Libstein are leading the plan along with the authorities from other settlements. Quoting Israeli security officials that he did not name, Tsuri noted that the plan coincides with accelerated and relatively positive communication between Hamas and Israel. The talks have been kept low key.

Speaking to Al-Monitor on condition of anonymity, a Hamas official said, “The movement [Hamas] does raise in the media the economic plans to improve the conditions in the Gaza Strip while they are still being deliberated. This is although we are open to any plan that would ease [the situation] in Gaza.”

He added, "Our goal is clear: lifting the siege on Gaza. We will not give Israel more chances to buy time and delay the implementation of the humanitarian understandings," signed by the Palestinian factions and Israel in October 2018, with the mediation of Egypt, Qatar and the United Nations.

The understandings involve opening the Gaza crossings, improving the flow of goods, employing thousands of Palestinian workers and resolving the electricity problem.

"The situation in Gaza has become unbearable for Palestinians," the Hamas official added. "Genuine measures and serious plans are required rather than distraction and empty promises. We are waiting to see what these plans will bring about."

Also, Israeli Defense Minister Naftali Bennett is looking into the security implications of setting up an artificial island off the Gaza coast. Prime Minister Benjamin Netanyahu recently gave initial approval to conduct a feasibility study on the proposal, which was first raised in 2017.

Late last month, Israel’s Channel 12 disclosed that Bennett met with Aviv Kochavi, chief of general staff of the Israeli army, and agreed on pushing forward the industrial island project and discussing the possibility of establishing an airport funded by international parties in the Gaza Strip. Israel held talks recently with US officials who expressed support for the project, to improve the harsh conditions in the Gaza Strip, the news report said.

As well, he told Al-Monitor, “The UN, Qatar and Egypt will encourage the Israeli plan, which will have international funding, and are in favor of a serious economic breakthrough in Gaza. Both sides will be informally implementing the plan. From the Israeli side, the heads of the settlements’ councils in the Gaza envelope [the Israeli area immediately adjacent to the Gaza Strip] will be involved. There will be businessmen and economists — not involved in any government ministries — from the Palestinian side.”

Yahya Sinwar, Hamas' leader in the Gaza Strip, recently warned against failing to resolve Gaza’s humanitarian problem, saying Hamas will not be patient much longer and will force Israel to break its 12-year blockade. At a youth conference last month in Gaza City, Sinwar noted the severity of the situation and said it affects all households. He threatened that if the crisis continues, Hamas has the ability to unleash rockets on Tel Aviv for six months.

Mohammed Abu Jayab, editor-in-chief at Gaza-based business newspaper Al-Eqtisadiah, spoke with Al-Monitor about the industrial zones' proposed locations and other details. "The first Israeli industrial zone will be near the Erez crossing in the north of Gaza; the second will be set up near the Karni crossing in the east of Gaza; and the third east of Khan Yunis," he said.

He added, "This is in addition to setting up a power plant and a plant for the treatment of solid waste and sewage, supplying the only power plant in Gaza with gas to operate at full capacity, developing desalination plants, and rehabilitating roads, sewage and domestic water infrastructure. The cost of all these projects amounts to nearly $2 billion.”

Mouin Rajab, an economics professor at Al-Azhar University in Gaza City, told Al-Monitor, “The [current] Israeli plan seeks to advance the interests of the two sides. Israel is interested in bringing about a security truce in the Gaza Strip by improving the living conditions there and receiving cheap Palestinian labor. … This is while Hamas wants to ease the high unemployment rate in the Gaza Strip, which amounts to 52%, and to see a serious development by breaking the siege."

He added, “Yet the industrial zones will be under Israeli supervision. Hence, improving the economic conditions in Gaza will continue to depend on Israel, and these zones are designed to [expand] the Israeli food, beverage, clothing, paper and mineral industries."

Meanwhile, Israel's plans seem to anger the Palestinian Authority (PA). Prime Minister Mohammad Shtayyeh told the media Dec. 2 that the plans are worrisome because he sees them as part of the US administration's "deal of the century" for peace in the Middle East, and they are in line with the economic plan White House senior adviser Jared Kushner presented at a June workshop on Palestine in Manama, Bahrain.

Fatah Central Committee member Hussein Sheikh tweeted Dec. 1 that Israel's economic plans are the continuation of the separatist project that would lead to a microstate within the Gaza Strip.

Although the PA seems irritated, it could reverse its position on the projects if they produce revenues for the authority, which is facing a crippling financial crisis and wants to prevent Hamas from having total control over them. Hamas is seemingly the biggest winner from these plans, if they can be implemented without any Israeli delay.