The reconciliation agreement between Israel and Turkey has been modestly welcomed in the Gaza Strip, as Palestinians hope it will lead the way to the end of the blockade. 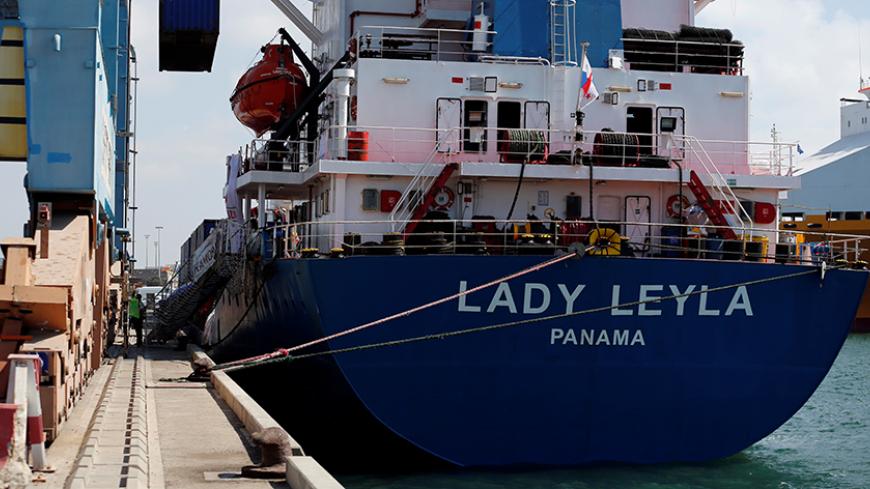 Containers are unloaded from the Panama-flagged Lady Leyla, a Turkish ship carrying humanitarian aid to the Gaza Strip, at the Ashdod port in southern Israel, July 3, 2016. - REUTERS/Amir Cohen

GAZA CITY, Gaza Strip — The Israeli-Turkish agreement that was announced June 28 ended a boycott that had lasted six years between the two countries in the wake of the Israeli attack on the Mavi Marmara. The ship was sailing as part of the Gaza Freedom Flotilla along the Gazan coast when it was attacked on May 30, 2010, claiming the lives of 10 Turks and wounding many others.

As a result, Turkey cut off relations with Israel and set three conditions before it would consider reversing this decision: a public Israeli apology for the attack, compensation for the families of the Turkish victims and the lifting of the blockade on the Gaza Strip. Two of these conditions were fulfilled and Turkey waived the third, but did ask for it to be attenuated by humanitarian and economic aid for Gaza.

The agreement, which divided Palestinians into supporters, opponents and others in between, provided a ray of hope to the citizens of Gaza. Although they had hoped Turkey would succeed in lifting the Israeli blockade, they appreciated the Turkish stance that supported them in several respects, including the demands to lift the blockade. Turkey also supported the Palestinians during the Israeli wars on the Gaza Strip.

For their part, Palestinian organizations demanded efforts to lift the Israeli blockade completely.

In this context, Mohammed Kaya, the head of the Turkish Humanitarian Relief Foundation in Gaza (IHH), told Al-Monitor that the foundation objects to the agreement that Turkey signed with Israel. He said that the foundation rejects Israel’s apology and compensation for the incident, and that its goal is to lift the blockade on the Gaza Strip completely. Kaya said that the economic and humanitarian projects that Turkey will be providing to Gaza will not succeed in lifting the siege nor can it do much to alleviate it, as the situation in Gaza can only be improved once the siege is completely lifted.

He warned that Turkey’s agreement to pass on humanitarian aid to the Palestinians in Gaza through Israel's Ashdod port and Karam Abu Salem crossing in southern Gaza is an official recognition of the blockade.

In a statement June 27, the IHH said that it will not withdraw the lawsuit against Israel. The statement read, “The families of martyrs asserted that they will not drop the lawsuits, and they will keep fighting to end the blockade. They will not accept Israel’s conceited 'kill now, pay later' logic.”

For his part, the head of the Palestinian Governmental Committee for Breaking the Siege in Gaza, Alaa al-Batta, told Al-Monitor, “We consider the economic projects that Turkey included in the deal with Israel to be a positive step that would only alleviate the siege without lifting it.” He said he hopes Turkey, as well as all countries backing the Palestinian cause, will continue their efforts to help Gaza break its years of siege that have almost completely destroyed its economy.

Batta said, “In truth, we had hoped the Turkish efforts would have led to lifting the siege completely. But the deal is an Israeli-Turkish issue, and we appreciate the package of economic projects destined for Gaza and included in the deal. These projects include the establishment of a power station that might alleviate the growing electricity crisis that has been plaguing Gaza for 10 years now.”

He added that his committee is in constant contact with the Turks to help implement those projects and push through the humanitarian aid, which began arriving July 3. The committee will be in charge of distributing this aid.

Palestinian journalist Abdullah al-Hamarna told Al-Monitor, “As a Palestinian, I appreciate any effort from the Arab or Muslim region to support the Palestinian cause and lift the blockade on Gaza. It is true that Turkey did not succeed in lifting the blockade, and this has caused us a great deal of pain because we did not expect it to normalize relations with Israel and leave us under siege. But we cannot forget its noble stance in demanding to lift the siege, either.”

Youssef al-Jamal, an activist working on the boycott of Israel, told Al-Monitor, “Normalizing relations with Israel at a time when it faces increased international isolation due to its crimes against Palestinians is an unforgivable crime.”

In the same context, the dean of the Trade and Economy Faculty at Al-Azhar University in Gaza, Samir Abu Mudallala, told Al-Monitor, “The Turkish projects included in the Israeli-Turkish agreement can alleviate the siege that has been plaguing the Gaza Strip for [almost] 10 years now. But these projects cannot in any way replace the issue of lifting the siege.”

He said that Israel included in this deal the items it deems fit regarding the Gaza siege, as it views the Palestinian cause as a humanitarian issue, not a political one. This is why Israel approved the humanitarian and economic projects suggested by Turkey, but refused to lift the siege, which it does consider a political issue.

Abu Mudallala noted that Gaza’s economic system has collapsed under the siege and as a result of three wars Israel has waged in recent years. According to him, the unemployment rate has reached 44%, while the number of university graduates who are unable to find a job is estimated at roughly 13,000 out of 130,000.

He added that the only way to overcome the economic problems in Gaza is to completely lift the siege, not to offer some humanitarian aid. Several countries have been donating this kind of aid to Gaza ever since the siege was imposed. He said that if the siege is lifted, Gaza would need $1 billion a year to revive its economy and reconstruct its infrastructure.

Talal Okal, a political analyst and reporter for Al-Ayyam, told Al-Monitor, “Turkey wants to return to its policy that is based on the zero-problems foreign policy with the world and that's why it concluded the agreement with Israel. Many problems such as terrorist bombings and the tense relations with the Syrian regime, Russia, Israel and Egypt are burdening the country now, and it is trying to get rid of them. The issue of the blockade on Gaza will not stand in Turkey’s way.”

He said that Hamas was betting more than any other Palestinian organization on Turkey’s success in lifting the siege, due to the nature of the Hamas-Turkey relationship. But the Turks favored their own interests instead of others’ expectations, and Palestinians must do the same.

Okal considered the fact that Turkey agreed to send the aid through Ashdod and the Karam Abu Salem crossing an implicit acknowledgment from Turkey of the imposed blockade. He said that the only way for Turkey to help Gaza is through Israel.

Palestinians hope that the rekindled relations between Turkey and Israel will ease Israeli blockade on the Gaza Strip now and ultimately end it completely.