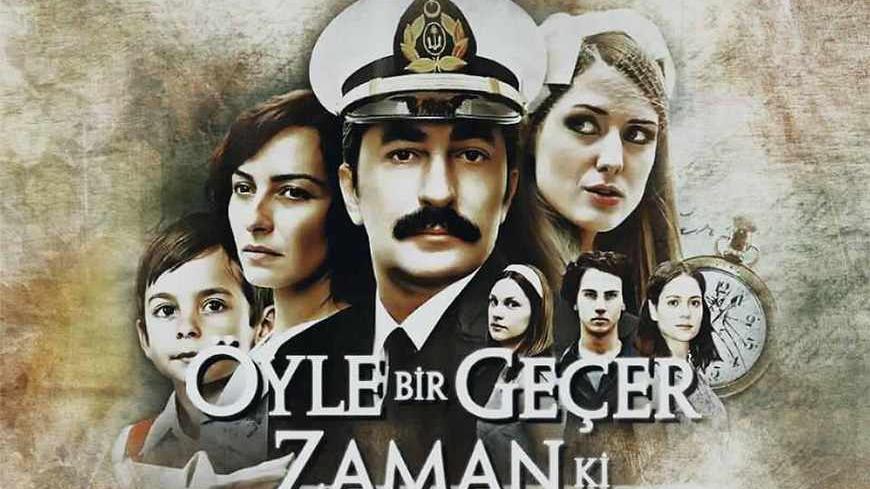 "Ala Mur al-Zaman," a Turkish television series that deals with Arab events in general, and Palestinian affairs in particular, is very popular in Gaza. - nawras-univers.blogspot.de

GAZA CITY, Gaza Strip — The deadly raid by the Israeli navy on May 31, 2010, against the Mavi Marmara marked the beginning of a push by Turkish Prime Minister Recep Tayyip Erdogan to support an end to the Israeli blockade against the Gaza Strip. His stance led to a widespread belief among Gazans that their savior might arrive in the form of a Turkish man. Soon after, "Turkmania" swept the Gazan street. To this day, Palestinians in Gaza remain captivated by Turkish culture.

Relations between the Turkish and Palestinian peoples go back centuries, with Palestine for a time being part of the Ottoman rule. According to Hani Agha, director of the Turkish Yardim Eli (Helping Hand) Foundation, which is active in Gaza, relations were reinvigorated by Erdogan's public stance on Israeli policy toward Gaza, when the prime minister put Israeli President Shimon Peres in an awkward position at the Davos economic summit in January 2009, accusing him of killing Palestinian children in Gaza. Erdogan's popularity skyrocketed among Gazans, some of whom named newborns after him.

Agha told Al-Monitor, "Since that incident, Gazans felt that Turkey — both the government and the people — was concerned [about Palestine] in a way that differs from the Arab states, which are only good at making statements. But the incident involving the Mavi Marmara flotilla, which [tried] to break the Israeli siege on Gaza in May 2010, constituted the real beginning of the Turkish 'opening.' Following the raid, the Turkish government began widespread development and relief work in Gaza."

Among the most prominent such efforts is the Al-Ikhwa project, which tries to foster social and spiritual integration between Palestinians in Gaza and Turks. As Agha described it, "This project is based on establishing a partnership between a family in Turkey and another in Gaza, within the framework of the 'brother families' project. The two families exchange family photos and get to know each other via phone calls, with the help of an interpreter. They exchange gifts and letters on special occasions and holidays."

The IHH, which provides Gazans with needed assistance, has also been the subject of criticism and demands for its closure. On June 24, 2010, 87 US senators called on President Barack Obama to place the IHH on a terrorist list, as Israel has done, on the ground that it supports Hamas and Hezbollah.

In light of the Turkish opening in Gaza, Palestinians there developed an interest in all things Turkish and have set out to learn more about the country. "Turkish drama has become the focus of great interest for Palestinians in Gaza, because of [Turkey's] rich history and culture. The names of Turkish actors are well-known in Gaza, and residents of the Strip follow the details of their lives," Agha asserted.

Turkish soap operas dubbed into Arabic are quite popular, especially the ones that address the Palestinian-Israeli conflict in some way. These include Hareem al-Sultan, which conveys the extensive power of by the Ottoman Empire, and Ala Mur al-Zaman, a series that deals with Arab events in general and Palestinian affairs in particular. This is in addition to The Valley of the Wolves and Farewell, two series that speak out about the Palestinian cause have attracted the ire of Israel.

Meanwhile, hundreds of Gazans have begun to learn the Turkish language amid a growing desire to visit Turkey. Al-Monitor spoke with Safa Martada, a graduate of a Turkish-language course in Gaza. "Learning the Turkish language has become very important in light of the huge opening between Turkey and Gaza, and [is a way] to exchange experiences between the two peoples," Martada noted. She hopes to visit Turkey to learn about it firsthand and perhaps complete her university studies there.

Martada's colleague Faten Mansour told Al-Monitor that she is learning Turkish so she can connect with Turks through social networking sites and teach them about the Palestinians' suffering to strengthen their support for Gaza. "Turkish people love Gaza, but they do not know a lot about it," she asserted.

According to Agha, Gazans have begun learning Turkish for a number of other reasons. Some are interested in forming business relationships, especially since Turkish goods are in demand in Gaza. Others study the language in the hope of getting educational scholarships in Turkey or developing social relationships with Turkish citizens.

Although Palestinian custom discourages Palestinian women from marrying foreign men, marriages between Turks and Gazan residents have begun to strengthen the bonds between the two peoples. Take for instance the case of Matin Kaya, 22, a Turkish man who married Ishraq, 20, the daughter of Ahmed Yousef who previously headed the Hamas government's Committee to Confront the Israeli Blockade.

He said that the Mavi Marmara incident had driven Turkish public opinion in supporting the Palestinian cause and amplified Turkish feelings of solidarity with the Palestinians. "Many in Turkey want to marry Gazan girls and live in Gaza. They envy me for doing this," Kaya contended.

His wife interrupted him. "My husband and his family sacrificed a lot to come to Gaza and support the Strip. Marrying him was the least I could do in exchange for these sacrifices," Ishraq said. She added, "I'm very happy with my marriage to Matin." Ishraq also told Al-Monitor that she did not hesitate for a moment when it came to marrying a Turkish man after she saw how a number of Turks on the Mavi Marmara sacrificed their lives to deliver aid to Gaza.

Israel apologized to Turkey for the Mavi Marmara incident on March 22, and the two countries established a joint committee to discuss compensation for the families of the victims and the restoration of relations. Regardless, Turkish activity in the Gaza Strip has not abated, and Gazans continue to welcome anything Turkish.