How Erdogan’s Israeli gambit may cost him Islamist support

For the first time, the Islamist opposition is raising its voice loudly against Turkish President Recep Tayyip Erdogan, decrying the normalization agreement with Israel. 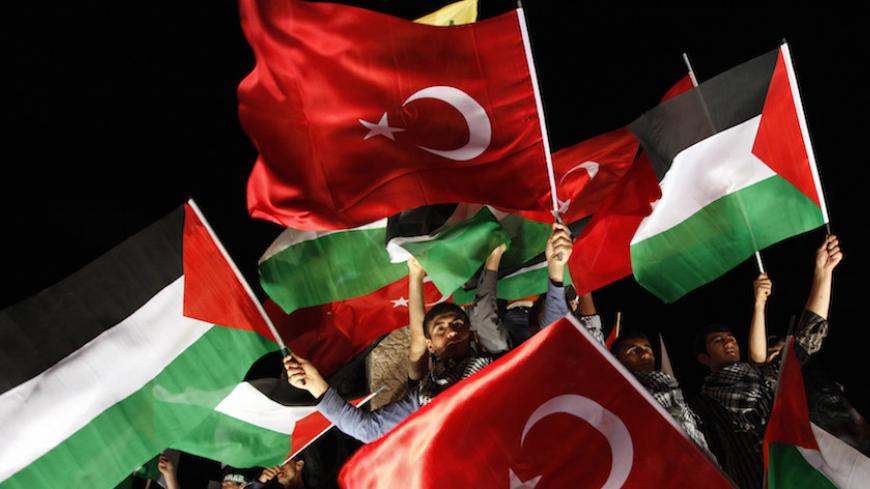 Pro-Palestinian demonstrators wave Turkish and Palestinian flags as they await the return of expelled activists from Israel to Turkey, in downtown Istanbul, late June 2, 2010. - REUTERS/Murad Sezer

Turkey's president made a startling reversal this week in one of his long-held stances on a touchy subject, firing up Islamists who were already unhappy with the country's recent rapprochement with Israel.

President Recep Tayyip Erdogan had always defended Turkey's role in the disastrous Mavi Marmara incident in 2010, in which an aid flotilla attempted to breach Israel's blockade of the Gaza Strip. Erdogan described Israel's actions as terrorism, recited the Quran for the flotilla victims at gatherings and criticized his domestic opponents frequently for not standing up against Israel. In July 2014, he spoke at a dinner and said, “If they [Mavi Marmara organizers] needed permission from an authority, we gave them permission.”

But on June 29, facing a strong backlash against the normalization agreement between Turkey and Israel on the domestic front, Erdogan ridiculed the Mavi Marmara organizers, asking them whom they had checked with before embarking on their journey to Gaza.

The Foundation for Human Rights and Freedoms and Humanitarian Relief (IHH) was the main group leading the flotilla to Gaza and represented the victims’ families in the aftermath of the crisis. Israel considers the IHH a terror organization. Erdogan’s U-turn is understandable. The normalization agreement between Israel and Turkey seriously disappointed Turkey’s Islamists. On June 27, the IHH released a searing statement announcing it does not approve of the agreement and wants nothing to do with it. The IHH also noted that it would like to continue with its lawsuits against the Israeli soldiers involved in the incident, and asked Turkey's parliament not to interfere with the IHH efforts.

Ibrahim Sediyani, a journalist and prominent writer who was one of the participants on the Mavi Marmara, did not mince words when he criticized the agreement.

“Turkey has now officially recognized the blockade. Israel killed nine people on the ship, but Erdogan has now sunk the ship completely. None of the Mavi Marmara participants are pleased with this agreement," which is being marketed as a victory, he said.

Indeed, another participant, Ridvan Kaya, the chairman of the nongovernmental organization Ozgur-Der and a columnist for Haksoz, told Al-Monitor, “I view normalization with Israel as an anomaly. As Israel is a force of invasion in the Middle East, I do not approve of any sort of diplomatic or political relations with it. Given the current dynamics in the region, the United States has compelled us into this agreement. I wish there was some sort of progress against the blockade of Gaza, but there really is not. The government worked diligently to convince the IHH [to get behind the agreement] and failed. It also tried to present this agreement as a victory and has been trying to prepare the public for a while now. I think the government has been successful in diluting the majority’s reaction. But there are still certain sections of the society, such as Felicity Party advocates, who are critical.”

Mahmut Kar, head of media relations in Turkey for the Islamist Hizb-ut Tahrir (Party of Liberation), voiced a grating criticism of the government as well.

“We issued an immediate reply against this agreement. The purpose should not have been normalization of relations with Israel, but rather to teach the murderers of Mavi Marmara their place. Presenting the issues, such as constructing a few buildings in Gaza and increasing trade with Israel, as a victory is not honorable,” Kar told Al-Monitor.

Kar was also critical of Erdogan’s bragging about Israel's plans to compensate the victims' families, saying, “Is the life of a Muslim to be measured with money? [Look at] the amount of money that the government pays soccer players on the national team for a few games. Is this something to be proud of? No, it is a shame."

He sees the situation as a test for Turkey's Islamist opposition and said the strength of its stance against the settlement will determine the future of the Islamist movement in Turkey.

“There has been one common cause of the Turkish Islamists all along, and that is Palestine," Kar said, adding that Erdogan's decision will affect future generations. "If Islamists are going to turn their backs on Palestine, they should at least be honest about their intention. They should not try to conceal it by saying we will provide aid or that there is an apology. We believe the IHH explained the agreement clearly. Now Islamists have to choose: Are they with Palestine or are they with Erdogan, who chose to walk with Israel and the United States?”

Zeynep Bozdas, foreign relations adviser for the Free Cause Party (Huda-Par), explained her Sunni-Islamist Kurdish party’s stand is no less critical than the IHH or others. “The agreement is misrepresented. I could have understood the terms as a strategic necessity, but to market it as a victory or saying it was done on behalf of Hamas is not right. The Gaza blockade is still in effect. And now Turkey has acknowledged it officially. We're not sure: What is the victory? We came back to where we started,” she said.

Confirming Bozdas’ analysis, Huda-Par spokesperson Mehmet Yavuz said on Rehber TV that the government prefers opportunism to idealism, and because of Turkey's failed Syrian foreign policy, Erdogan now is compelled to do what he previously detested.

Kadir Akaras, the chairman of Ehli Beyt Scholars Association, said his opinion is in line with the other Islamists. “Just like any other Shiite community, we view Israel as an invader, and we refuse any cooperation and agreement with them, as we believe such cooperation would lead to new invasions and war. An unofficial apology on the phone means nothing. The blockade [of Gaza] is still intact. The lives of the martyrs are priceless. I believe most of the Islamists are against this agreement whether or not they speak up. I believe the Islamist image of AKP is harmed significantly.”

Indeed, Al-Monitor could not find any Islamists who were celebrating the normalization agreement. However, Murat Ozer, the chairman of Turkish NGO Imkander Association, provided a different perspective.

“Imkander believes Israel is an illegal entity that employs terror as a state policy. We do not encourage a friendship agreement with Israel. However, Turkey is trying to minimize the enmity in the region; therefore, until the conflicts in Syria and Iraq are resolved, other fights can be delayed. There is no benefit in continuing an argument with Israel at this point,” Ozer told Al-Monitor.

Ozer, an Islamist who is not associated with the government, acknowledges progress has been made in the past six years. “Twenty years ago, Hamas was considered a terror organization. Today Hamas is accepted as a legitimate representative of the Palestinian people in Turkey,” he said.

A senior bureaucrat who asked not to be named concurred with Ozer and argued that the most crucial point of the agreement is Israel's de facto recognition of Hamas and Israeli acceptance of Turkey as a protector of Hamas. “We have not been able to explain all the achievements of the process to the Turkish public. I think we lacked a proper plan to do so. But the government elites on both sides know that now Turkey communicates with Israel on behalf of Hamas,” he said.

Given the determined arguments from Islamist opposition, what can we expect now? Can they challenge Erdogan’s authority? Islamist opposition is a new concept for mainstream media and average Turks. Given Erdogan’s initial reaction toward the IHH, a smart next move for the group would be to lower its voice and turn down the heat. If the IHH doesn't, then most likely its reputation will be seriously tarnished and freedoms within Turkey will be curtailed.

As long as Islamist and secular groups challenging Erdogan are not united, Erdogan will be able to silence opposition. The normalization agreement with Israel is out of the norm for Turkish Islamists, but they are also most familiar with Erdogan’s methods of crushing opposition. In the coming days, we can expect further glorification of Erdogan as the "godfather of Palestinians," while he reduces the intensity of Israel-bashing.