Turkey has been a top study destination for Palestinians since 2010, but that is changing. 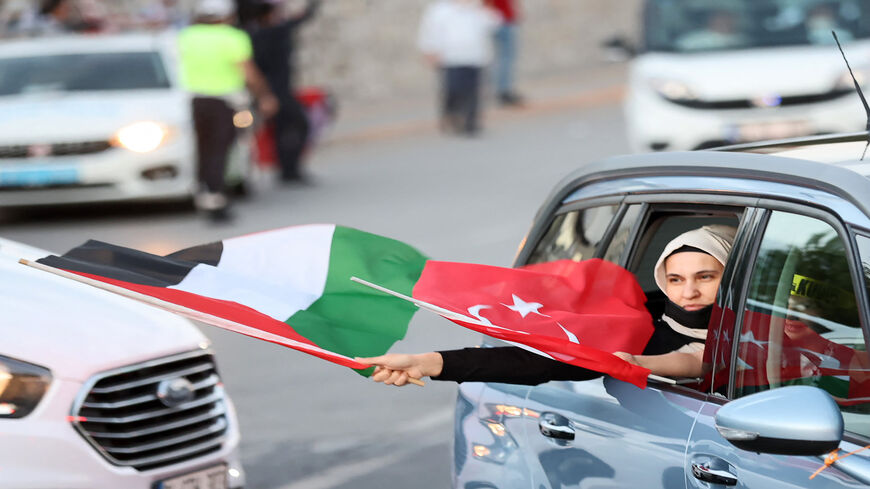 A pro-Palestinian supporter holds a Palestinian flag during a protest to condemn the ongoing Israeli airstrikes on the Gaza Strip, in Ankara, Turkey, May 18, 2021. - Adem Altan/AFP via Getty Images

Gaza City, Gaza Strip — Since the Israeli navy stormed Turkey’s Mavi Marmara on May 31, 2010, which resulted in the killing of nine Turkish pro-Palestinian activists who were aboard the ship that was heading to the Gaza Strip in a bid to break the Israeli blockade imposed since 2007, Turkey has become an important destination for Palestinian youth seeking to study, work and lead a better life.

Since then, Palestinians had become increasingly interested in the Turkish culture and language, and Turkish language schools and institutes in the Gaza Strip gained popularity.

However, over the past few years, the Palestinians’ demand to learn Turkish in these schools has decreased as well as their desire to travel to Turkey for work or take up residence. This reluctance has increased significantly in the past few months.

The Ottoman Culture Center, established by Turkey’s Humanitarian Relief Foundation (IHH) in 2009, and funded by the Turkish government, is one of the most important centers for language ​​and computer studies in Gaza.

He explained that years ago, many Gazans rushed to learn Turkish, especially those wanting to go to Turkey to find work, go to university or emigrate.

Saleh added, “Today the center’s students are university students who wish to obtain scholarships that the Turkish government provides annually to the Palestinians.” This year, the center launched four English-language courses, and not a single course to learn Turkish due to the low turnout.

Several economic and political events — mainly the ongoing depreciation of the Turkish currency (which dropped to $0.10) and the disappearance of seven Palestinian residents of Turkey in September — could be behind this trend.

The Hamas-affiliated Shehab news agency reported Oct. 10 that the seven Palestinians are being held in Turkish prisons for involvement in Turkish national security-related cases.

In addition, Turkey is no longer a suitable place for Palestinian job seekers who are finding better opportunities in other European countries, such as Germany, Austria and Belgium. There are no statistics indicating the number of Palestinians who have recently arrived in Turkey — many of them pass through Turkey en route to other countries.

In an interview with the New York Post on Dec. 3, 2019, the head of the Palestinian community in Istanbul, Hazem Antar, said that roughly 20,000-22,000 Palestinians lived in Turkey at that time.

Khamis al-Saidi, 22, who traveled to Turkey three years ago searching for a job, told Al-Monitor, “Working in Turkey was a golden idea for me and the unemployed Palestinian youth. That is why I was enrolled in a Turkish-language institute [in Gaza].”

He said that he worked in several sectors in Turkey, such as clothing, agriculture and food, before he decided to move to Belgium two months ago.

He noted, “Living in Turkey has become more complicated for refugees and expatriates. Turkey is no longer a destination for job seekers, amid the lack of job opportunities and low wages.”

According to Saidi, the deterioration of the Turkish lira is the result of a saturated market for job seekers due to the Turkish policy of attracting refugees such as Syrians and Afghans. When he moved to Turkey three years ago, the lira was worth $0.18, compared with $0.10 today.

Ahmad Abu Tarabish, a Turkey-based Palestinian researcher on Turkish affairs and writer for the Turkish Daily Sabah newspaper, told Al-Monitor, “There are several factors behind the Palestinians’ reluctance to work, live or study in Turkey — most notably the coronavirus pandemic and imposed travel restrictions, in addition to Turkey’s financial and economic crisis since mid-2018 that has exacerbated because of the pandemic.”

He said, “With an unemployment rate of 12%, inflation reaching 20% and the local currency having lost nearly two-thirds of its value, Gazans are finding that they have fewer chances to move to Turkey, especially in light of these economic indicators.”

At the official level, Turkey is still committed to its stance in solidarity with the Palestinians, especially the besieged Gaza Strip. Turkey continues to pump aid in the Palestinian territories at all levels, mainly in support of relief services and infrastructure. On Oct. 31, IHH provided assistance to 100 families affected by the recent Israeli aggression on the Gaza Strip.

Osama Abu Nahl, a professor of politics and international relations at Al-Azhar University in Gaza, told Al-Monitor, “Since 2010, Turkey has opened its doors to Palestinians and other citizens, as part of its openness to the Arab world, which prompted the Palestinians to learn the Turkish language. Yet the situation has changed recently, especially the economic situation and currency devaluation.”

He said that the currency devaluation has negatively affected Turkish citizens and expats, making it difficult for the latter to save and exchange money to hard currency before transferring it to their families at home, let alone covering their own expenses in Turkey.

He added, “At present Turkey is nothing but a transit corridor to Europe for many Palestinians who arrive there. This is why they no longer need to learn the language because they do not intend to stay there.”