English study an escape for Gazans

Attendance in English teaching centers in Gaza is on the rise, with the youth increasingly aware that learning the language increases their chances of finding better jobs and studying abroad. 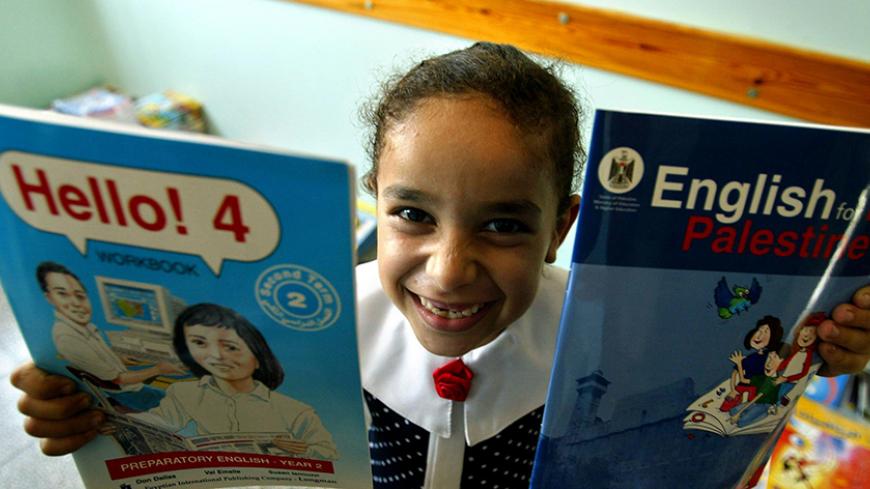 A Palestinian girl holds her new textbooks at the Dar Al-Arqam Islamic School on the first day of the new school year in Gaza City, Sept. 1, 2003. - Getty Images/Abid Katib

GAZA CITY, Gaza Strip — More and more young Gazans are determined to master the English language — the key, they say, to getting jobs, studying abroad and conveying the Palestinians’ suffering to the world.

Huda Droll, an American teacher at Amideast in Gaza — the area’s most famous English-language teaching center — told Al-Monitor, “There is a remarkable and constant rise in demand for English learning among Palestinians, in an effort to get a scholarship to study abroad, get a job or to discuss with the people of the world the atrocities committed by Israel against them.”

Haitham Khoudari, 23, who studied electrical engineering at university, recently finished a three-month English course at a local school, al-Salam Center. The course cost 550 shekels ($142), which he borrowed from a relative.

Khoudari told Al-Monitor, “Most of the jobs [in Palestine] require excellent English reading and writing skills for admission. [English] is difficult to master at elementary school or university.”

He explained that employers in most office jobs such as accounting and business administration require that their staff be fluent in English, even though the market is local, not international.

Palestinian students learn English in public schools from the first through the 12th grade. But according to Ziad Kheiry, a public school teacher, “This education does not result in a generation with an excellent command in English.”

Kheiry told Al-Monitor, “Public school education does not focus on teaching English in a way that goes in line with the urgent need in Gaza. I think that practice and communication are the most important pillars to learn any language, and these pillars are not available at public schools.”

That gap, he said, is what drives young people to costly language centers. Wael Charafi, 24, who received a bachelor’s degree in communication and journalism at the Islamic University of Gaza last year, seeks to master the English language to get a scholarship and complete his studies in the United States or Canada.

“A master’s degree at a local university costs $10,000, which I’ve never had in my whole life,” he told Al-Monitor. “This has prompted me to seek a scholarship at a Canadian or an American university. However, English-language proficiency is required to get a scholarship, and this is what I am seeking to achieve.”

Gazans often either take out bank loans or borrow from relatives to complete a two-year master’s program.

Charafi said he is taking 12 consecutive months of intensive English at Amideast in Gaza to get his Test of English as a Foreign Language (TOEFL) certificate.

The whole process to obtain the TOEFL certificate will cost him $1,700, he said. This amount includes $1,200 for the year of courses, $200 for the TOEFL preparation courses and $300 to take the test, which if passed will qualify him to continue his university studies abroad.

Others have equally powerful reasons to learn English. A group of young Palestinians recently started a project called “We Are Not Numbers” to honor those who were killed during the last Israeli aggression on Gaza. They created a website and Facebook page to reach the English-speaking world.

The project manager, Ahmed al-Naouq, told Al-Monitor, “Our goal is to deliver to the world the message that we are not mere numbers. Media outlets give the number of deaths, wounded and displaced by the war, yet they do not speak of the suffering. Each victim has a story of tragedy that they want the world to hear.”

Foreign journalism is “usually incomplete, since [outside journalists] are unfamiliar with the Arabic language spoken by the victims and eyewitnesses in Gaza,” Naouq said. “This prevents their version of the story from being comprehensive. This is why we, the Gazans who master the English language, have decided to communicate the victims’ testimonies as they wish.”

Participants in the project write human interest stories and post them on the website “to correct the foreign public’s view of the Israeli-Palestinian conflict,” he said.

Naouq also believes those who graduate from local language teaching centers and institutes in Gaza do not speak English fluently. Some of the young project participants were raised in British and American communities, allowing them to polish their pronunciation, while others have managed to master it by joining professional international institutes in Gaza, such as Amideast and the British Council.

Droll said Gazan youth understand the importance of English to their futures. She added, “My students are very serious in learning English; some are of great minds and are willing to open up to the outside world to develop their skills and capabilities.”

These students hope to improve the harsh living conditions caused by the war and Israeli blockade — by telling the world.

by Murielle KASPRZAK and Joseph SCHMID | AFP | May 26, 2022
END_OF_DOCUMENT_TOKEN_TO_BE_REPLACED